All international awards conferred on Suu Kyi should be revoked 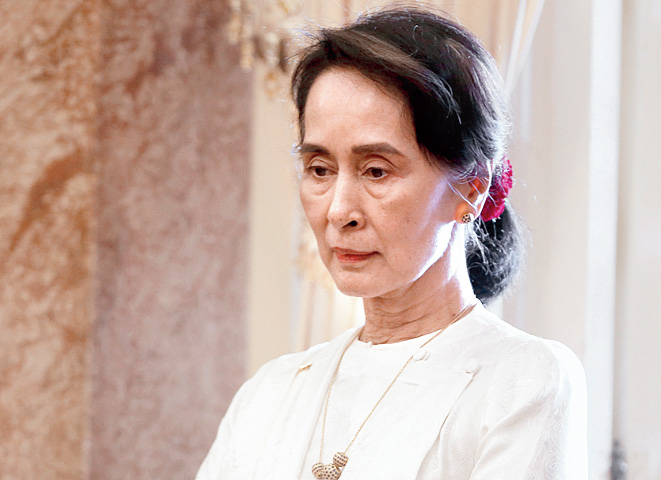 Sir — Canada’s Parliament has stripped the Myanmar leader, Aung San Suu Kyi, of her honorary Canadian citizenship. The lawmakers of the North American nation took this step to protest against the alleged complicity of Suu Kyi’s administration in the persecution of Rohingya minorities in Myanmar. Last year, a brutal military crackdown forced millions of Rohingya people to flee to neighbouring Bangladesh.

In the past, owing to her fight to restore democracy in the Southeast Asian nation, Suu Kyi became a revered global icon. She was also awarded the Nobel Peace Prize. All international awards conferred on Suu Kyi ought to be revoked.

Sir — The last-ball victory for India over Bangladesh in the Asia Cup final highlighted, once again, how unpredictable one-day international cricket can become (“India prevail in thriller vs Bangla, retain title”, Sept 29). At one stage, after India lost Rohit Sharma, when Mahendra Singh Dhoni and Dinesh Karthik were struggling to rotate the strike, the match was tilting in Bangladesh’s favour. However, players like Kedar Jadhav soldiered on and India managed to reach the target. The final match was one of the most closely-contested games in the series. However, the game will be remembered more for the brilliant knock by the Bangladeshi player, Liton Das. He almost took the match away from India en route to his maiden ODI century.

The leadership qualities of the Indian captain, Rohit Sharma, needs to be commended as well. Sharma marshalled his resources intelligently to keep the opposition on a tight leash. He led from the front and scored well in almost all the games to give a solid start to the

Indian innings. The selectors should feel vindicated for having reposed their trust in Sharma.

Sir — There is no need to go overboard with the celebrations over India’s Asia Cup victory. We should not forget the thrashing that

the Indian team received at the hands of England just prior to the continental championship. India lost the away Test series against England 1-4. The result in the Asia Cup is no surprise, as there was hardly any competition of worth.

One suspects that the big bosses of Indian cricket would now start claiming, all over again, that the current team is the best Indian side in the last two decades. Unfortunately, this bragging takes a beating every time the men in blue tour countries like England, Australia and South Africa. It is hoped that rather than making such ludicrous claims, the cricket administrators will see to it that our batsmen get proper training to negotiate fast and swing bowlers.

Sir — The Indian cricketers ought to be congratulated for winning the Asia Cup. First, winning the tournament just after the Test series defeat to England was not easy. Second, India were also playing without their regular captain, Virat Kohli. The players found ways to overcome the mental challenges.

This victory will give a much-needed boost to the team’s confidence.

Sir — In the article, “The death of a cinema hall” (Sept 27), Asha Gangoli has narrated how the once-famous Jyoti Cinema of Calcutta has fallen into disuse. There was a time when a Calcuttan would boast about the Jyoti, like Gangoli has lovingly referred to the cinema hall, to his friends and relatives living in other places.

The advent of television and pirated videos ruined many single-screen theatres in the city, including the Jyoti. Film buffs no longer had to rush to cinema halls to catch the latest release. They could instead watch blockbuster movies from the comfort of their homes.

As a result, most of the cinema halls have been shut in the last three decades, whereas some have been converted to departmental stores. Amidst all this, it is the workers of the closed units who have had to suffer the worst.

Sir — Asha Gangoli has spoken about the “death” of only one cinema hall in her piece. Many other movie theatres have also faced a similar fate, not just in India but also in other countries. The few that are still running will be forced to shut sooner or later.

In the future, cinema halls will only remain in our memories.

Sir — One sees no point in lamenting the closure of cinema halls. Many theatres did not pay enough attention to viewer comfort and security. This forced cinemagoers to avoid such places.