Is there anything to read into the unprecedented number of Ganesh pujas across Calcutta? 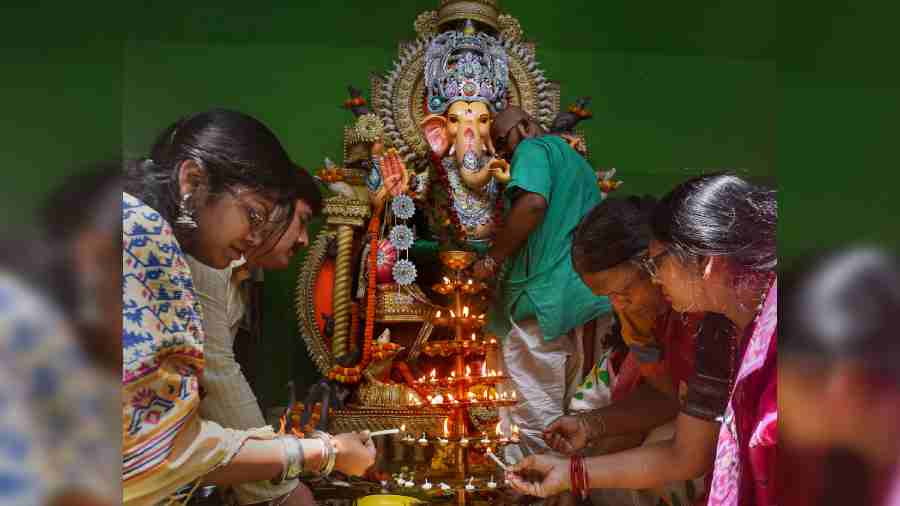 Devotees perform rituals before clay idols of Lord Ganesha at a community puja pandal, on the occasion of Ganesh Chaturthi in Calcutta.
Swapan Mahapatra/ PTI
Upala Sen   |   Published 04.09.22, 02:57 AM

On a late September day in 1995, it spread like wildfire countrywide that Ganesh was drinking milk. Bombay and Delhi witnessed great frenzy. In Calcutta too, where Ganesh puja was not known to happen beyond the business community, there was a rush to feed the Hindu god. In central Calcutta’s Burrabazar area, around noon, tea stalls stopped selling tea and started selling milk to devotees. “An earthen cup of milk was priced at a staggering Rs 10,” The Telegraph reported that day. Durga Puja was around the corner, but the artisans of Kumartuli set aside the task of giving finishing touches to pre-ordered Durga idols and made a quick buck of the miracle by selling some standalone Ganesh idols. In the two decades thereafter, Ganesh did not make such a stir in these parts. Until this year that is.

In Bengal, the familiar representation of Ganesh is not Ganpati Bappa but Ganesh Dada. This representation has for long lived in people's minds and sentiments rather than pandals. And though there will always be more mindspace than pandal space, this year, according to reports, there were a staggering 350 Ganesh puja pandals across Calcutta. Forget politicians, who are the same everywhere doing things for their own ends, even actors from the Bengali television and film industry posted pictures of themselves with Ganesh idols in a manner previously associated only with Bombay and those of Bollywood. Yes, yes, Jeetu Kamal of Ray resemblance did too! The second male lead in a TV show was shown breaking into frenzied prayer-dance and chant in jeans and white shirt before a Ganesh murti in Benaras!

That year, when Ganesh drank milk, scientists explained it as capillary action. In cases where this rule of science didn't apply, rationalists cried "auto suggestion". Ganesh is a child god. In these parts, beyond his association with prosperity and salvation, Ganesh has been adored as Ma Durga’s son, the divine one to whom we extend our affections more than any ask. This difference is not about good and less good, or this over that, it just is. This variety was once India. This sameness has not made us more Indian.