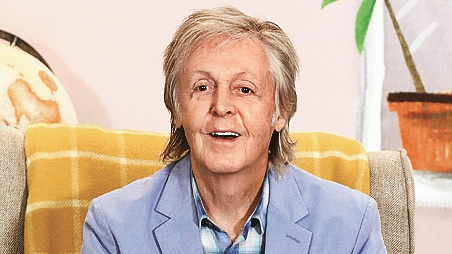 Sir Paul McCartney’s forthcoming autobiography, The Lyrics, which will be published on November 2, has certainly caused a buzz. It is expected to reveal just how much India influenced The Beatles. From February till April 1968, the band relaxed in Rishikesh with Maharishi Mahesh Yogi, who plied the impressionable youngsters with talk of Indian philosophy, vegetarian food with no spice and transcendental meditation. But this was also a very productive period for The Beatles, who composed between 23 and 48 songs, some 17 of which were included in their White Album. McCartney was there with his girlfriend, Jane Asher, while John Lennon, Ringo Starr and George Harrison had come with their (first) wives, Cynthia Powell, Maureen Starkey and Pattie Boyd, respectively.

McCartney’s unconventional autobiography is described as “the ‘extraordinary’ story of his life for the first time through the prism of 154 song lyrics”. It will be published in two 480-page hardback volumes priced at £75. Harrison, who had spent months in Bombay learning the sitar from Ravi Shankar, wanted to delve deeper into Indian spirituality. The work is edited by the Pulitzer prize-winning Irish poet, Paul Muldoon, based on conversations with McCartney over a five-year period. McCartney, now 78, explained: “I know that some people, when they get to a certain age, like to go to a diary to recall day-to-day events from the past, but I have no such notebooks. What I do have are my songs, hundreds of them, which I’ve learned serve much the same purpose. And these songs span my entire life.”

My song was always “Hey Jude”, which I would play in Calcutta during the long vacations from university in England.

Sophia Loren, now 86, was wonderfully engaging when she was a guest on BBC Radio 4’s Desert Island Discs last week, following on from Malala Yousafzai the previous episode. I went back and played “Lara’s Theme” from Dr Zhivago, which she had picked as one of her eight pieces of music. “This was the film that my [late] husband Carlo [Ponti] was... most proud of — he fought for this music to be in the film,” she said.

I know the Italian legend would love to be invited to India. One of my Cannes highlights from 2014 was attending a ‘masterclass’ given by Sophia in the packed Salle Buñuel theatre. She had first come to Cannes in 1955. At one point Loren insisted, “I have never been beautiful”, and spoke instead of the beauty of Indian actresses. “We see many of your films on Italian television — and they are very beautiful. And the actresses are lovely, beautiful, great. Yes, yes, yes!”

The Financial Times definitely wasn’t amused by the Indian prime minister’s decision to rename the ‘world’s largest cricket stadium’ after himself in his own lifetime. The pink paper said in a leader that “Modi’s act of vanity is part of a wider effort to rewrite the country’s history and sense of self,” adding unkindly that “there is one other reason why political leaders start naming places after themselves while they are still in power. It is that they are not confident their nation will be quite so keen to honour them once they have gone.”

But Narendra Modi is in good company. Sir Winston Churchill’s grandson, Sir Nicholas Soames, a former Tory cabinet minister, reminded us last week in a paper in Policy Exchange, a think-tank, that Churchill College, “the first one at Cambridge University to be named after a person living at the time of its founding, is the National and Commonwealth Memorial to Sir Winston Churchill and was to be the embodiment of his vision of how higher education can benefit society in the modern age”.

Only Soames now wants Churchill College to be stripped of its name because he says his grandfather’s reputation is being trashed under its Master, Dame Athene Donald, who has sanctioned a year-long programme of events to discuss the wartime leader’s allegedly racist views on Empire, especially relating to the 1943 Bengal Famine.

Soames wondered whether the College should continue to retain its name: “The College benefits enormously from Churchill’s name. If they traduce it, should they be able to have their cake and eat it?”

I knew Roy Greenslade when we were colleagues at The Sunday Times. It puzzled me when, as The Guardian’s media columnist, he wrote a disobliging piece about one of my race stories about an English actor ‘blacking up’ to play Jinnah (this role was later taken by Christopher Lee).

Last week his shocked former colleagues turned on him with a vengeance I have never seen before, after Greenslade, who also lectured on ‘media ethics’ as professor of journalism at City University, London, admitted he had for four decades secretly supported the Irish Republican Army’s bombing campaign in which countless lives were lost. As a young Daily Telegraph reporter, I had raced around covering one bomb blast after another.“I came to accept the fight between the forces of the state and a group of insurgents was unequal and, therefore, could not be fought on conventional terms,” admitted Greenslade, who also wrote a column supporting the IRA under the pseudonym, George King. “In other words, I supported the use of physical force.”

Boris Johnson shouted, “[P]lease shoot that ******* dog,” after Dilyn caused expensive damage at Chequers, the PM’s country residence, by chewing antique furniture and soiling the carpet. But the rescued Jack Russell cross, loved by Boris and his fiance, Carrie Symonds, is staying despite anonymous briefings against him. A Downing Street official defended Dilyn: “He is a lovely little fellow but does not appear to have got enough training when he was a puppy... he doesn’t know... better.”