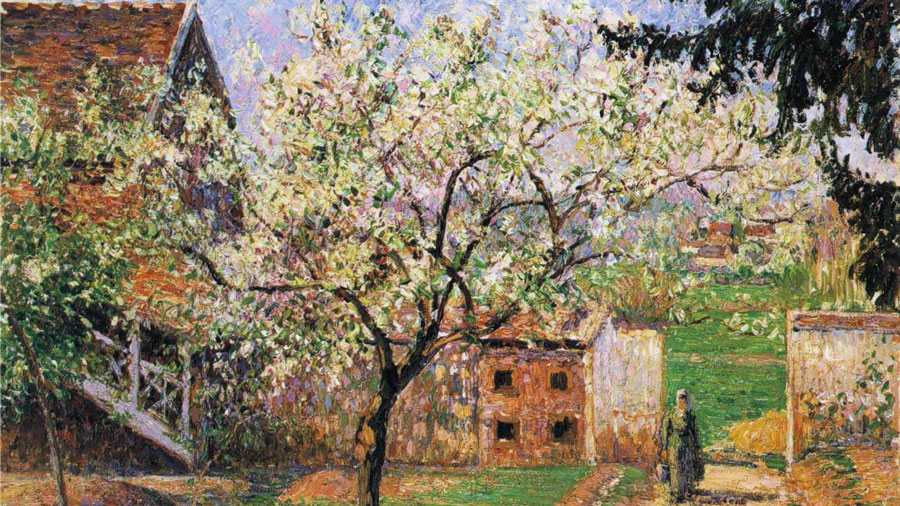 Camille Pissarro’s Plum Trees in Blossom, painted by the artist in 1894 towards the end of his life at Éragny, his house outside Paris, is just about my favourite painting in a new exhibition focusing on the French Impressionists at the Royal Academy which has reopened — with strict restrictions — after four months of lockdown. “Our belief in the power of art for all is still as strong as ever and we can’t wait for the RA to gradually be filled once more with people and creativity,” said Rebecca Salter, the RA’s first woman president in over 250 years. The exhibition of 60 works, Gauguin and the Impressionists: Masterpieces from the Ordrupgaard Collection, includes masterpieces by Pissarro, Edgar Degas, Édouard Manet, Claude Monet, Berthe Morisot, Auguste Renoir and Alfred Sisley. It also features precursors of Impressionism such as Camille Corot, Gustave Courbet, Jules Dupré and Charles-François Daubigny, and a number of Post-Impressionist works including “an exceptional group of eight paintings” by Paul Gauguin.

Ordrupgaard, now a museum, is a house just outside Copenhagen where a wealthy Danish couple, Wilhelm and Henny Hansen, built one of the finest collections of Impressionist paintings between 1916 and the late 1920s. The exhibition’s curator, Anna Ferrari, said it was “a great privilege to be able to hang such a wonderful collection of paintings”. About Pissarro’s Plum Trees, she explained the artist had “done a series of works of the four seasons”, as reflected in his garden. She also spoke about the Impressionists’ en plein air movement: “One of the key ideas... was to paint in the open air — they were breaking from the academic tradition of painting indoors.”

This has contemporary relevance. Recognizing people lucky enough to have gardens have found it psychologically easier to get through lockdown, the British government never denied people access to parks and open spaces even at the height of the pandemic.

Home is where the heart is

After 20 years of scholarly research, Dr Gëzim Alpion, from the department of social policy, sociology and criminology at the University of Birmingham, has just published his much praised Mother Teresa: The Saint and Her Nation, which seeks to unravel the mystery behind the woman. He has described his book as “a labour of love”.

But why did she pick Calcutta? “Mother Teresa chose Calcutta as she had heard about the city from Balkan priests in the talks they gave in her parish church and in articles published in the Catholic magazines about their experience as missionaries in India,” the author, who, like his subject, is of Albanian origin, told me. “She applied to the Loreto order in Dublin with the intention of being sent to Calcutta where this order had its headquarters. She always felt safe, welcome and at home in Calcutta. She once said, ‘I will be buried in India — my country.’”

Alpion explained: “The important thing is that while Mother Teresa was proud of her Albanian origin, she was also proud to consider herself an Indian and see Calcutta and India as her home. She loved India. I believe she genuinely felt an attachment with Calcutta.”

Amar Singh seemed remarkably well-informed when I first met him in July 2006 when he had come to Leicester as Amitabh Bachchan’s “younger brother” when the Bollywood legend was being given an honorary Doctor of Arts by De Montfort University as “quite simply India’s greatest film actor”.

“He is friendly with Ramola Bachchan,” said the Samajwadi Party leader in a disapproving way, when we were introduced by Keith Vaz, the then Labour MP for Leicester East, who had nominated Bachchan for the honorary degree. It is true that I attended Ramola’s parties at her home in Hampstead — in fact, I was asked to do so to write a colour piece by Charles Moore, my editor at The Sunday Telegraph (Charles was last week given a peerage by another of his rather more influential journalists, Boris Johnson).

After the graduation ceremony, Vaz escorted his two guests on a tour of Leicester and the city’s football club and also hosted a dinner for them at the House of Commons. To his credit, Vaz did not abandon the Samajwadi leader but paid generous tribute to him after he passed away in Singapore, aged 64.

“Amar Singh was a one off — I liked him,” Vaz told me. “Few of us politicians get to be called a legend in their lifetime but he certainly was. Privately he was a Netflix series on his own with intimate knowledge of so many politicians and business figures. We will miss his incredible political skills, his biting wit and his charisma.”

Another word on the broadcaster, Kailash Budhwar, whose moving and dignified funeral was live streamed from the Chiltern Hills Crematorium in Buckinghamshire for relatives and friends who could not attend because of Covid restrictions. Since Kailash was “spiritual” but not formally religious, there were no priests but the service began with “Raghupati Raghava Raja Ram”, while a former colleague described his period at the BBC as “the golden age of the Hindi service”. There was also a reading of Harivansh Rai Bachchan’s poem, “Jo beet gayi so baat gayi”.

In the six-part BBC dramatization of A Suitable Boy, it’s worth keeping an eye on Lata Mehra’s Calcutta suitor, Amit Chatterji (Mikhail Sen), who made his debut in the very engaging second episode. Vikram Seth put a bit of himself into the character. Vikram’s late mother, the judge Leila Seth, who had been reading Tagore’s Shesher Kobita, had wanted to call her son “Amit”, but her husband decided the name should begin with “V” after consulting astrologers. So it became “Vikram”.