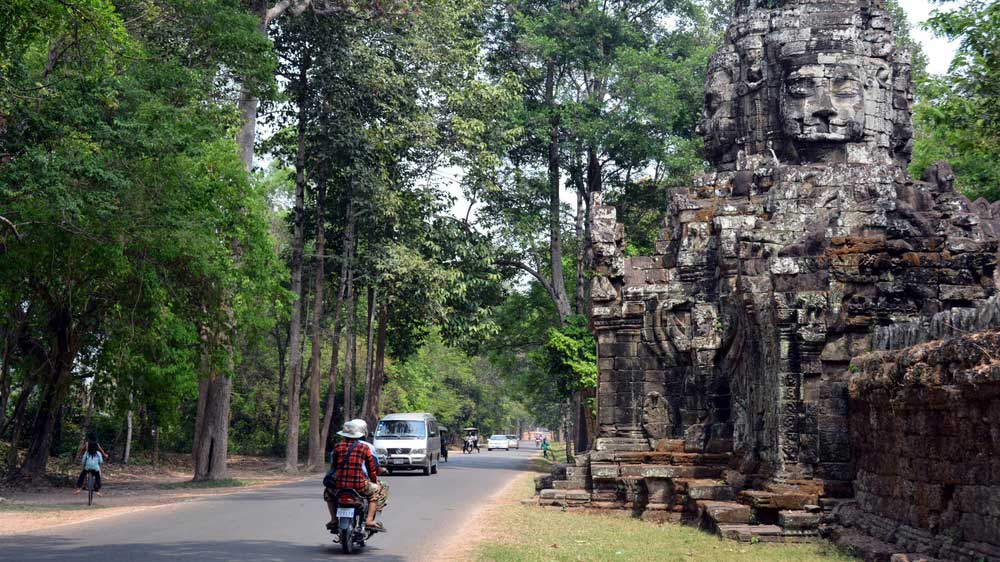 It is rare for archaeologists to find themselves in the midst of a geopolitical storm. Yet this is what happened to the Archaeological Survey of India in the 1980s. Vietnam had intervened militarily in Cambodia in late 1978 to overthrow the Khmer Rouge whose leadership headed by Pol Pot had been responsible for a widespread genocide. Vietnam, thereafter, faced a Chinese invasion leading to a brief but intense border war between the two. In Cambodia, the new Vietnam-backed government was unable to secure recognition in the United Nations and from its Southeast Asian neighbours.  Cambodia had, in effect, become a small part of a larger geopolitical game between the United States of America and the Soviet Union with China and Vietnam, respectively, in alliance with each of the two adversaries. India was one of the few countries that recognized the new government.

Pol Pot’s genocide and the upheaval that shook Cambodia through the 1970s had one very specific consequence, and this was for the temple complex of Angkor Wat. Khmer Rouge purges meant all trained Cambodian personnel, such as they were, who had worked in and maintained the site were killed or had left. A civil war meant that international experts had also left and the fact that the temple was in a war zone meant that the risk of physical destruction was ever present. Post-1979, the absence of international recognition meant most external assistance was ruled out.

Under these circumstances, a request was made to India for assistance in the maintenance of Angkor Wat. For most in India this was no more than in the order of things. For those who had visited the Angkor temple complex or knew about it, it was natural that India should be undertaking its restoration. For the ASI embarking on the restoration was a landmark event — testimony to not only India’s international standing and to India-Cambodia relations but also a testimonial to its professional expertise in excavation, restoration and maintenance of Hindu, Buddhist and Islamic structures. In 1981, the ASI’s annual publication, Indian Archaeology:  A Review, had the majestic Angkor Wat on its cover. By 1986, an ASI team was at work and would continue for the next seven years.

The ASI alone in Angkor Wat, as a result of an agreement between India and Cambodia, created, in the words of one observer, “an uproar in the small worlds of archeology and stone conservation”. The French were the most aggrieved. Angkor was their domain. A Frenchman had ‘discovered’ the complex in the mid-19th century and in the period thereafter French scholarship had set the pace and the standards for the history and the archaeology of Indo-China. They had been, after all, the colonial power and had overseen conservation and research in Angkor for over a century till the conflict in the 1970s forced them out. The École Française d’Extrême Orient or the EFFO had been at the centre of scholarship and conservation from the early 20th century and had maintained this premier position through the Japanese occupation in the 1940s and even after decolonization in the mid 1950s. Thus, the Indian presence and the absence of the French were taken badly and a barrage of criticism of the ASI followed over construction techniques. Most of it was misdirected and did not take into account the situation on the ground that a small team of archaeologists faced on account of the Khmer Rouge insurgency that had not fully died out, landmines and so on. In ASI reports of the period, we also find adverse comments on the errors made by French conservationists in the past and how these were now being set right by the Indian team.

The ASI archaeologists on the ground in Cambodia saw the criticism as motivated — former colonials resentful of new actors and powers. They, in turn, claimed their own special relationship with Angkor: “India is emotionally attached to the monument. There is so much Indian inspiration.” Looking at the difficulties the archaeologists faced and the challenging environment they were in, a director-general of the ASI was to write: “It was a great adventure overseas, not unlike the ones undertaken by scholars, artists, merchants and princes who crossed the eastern seas in the early Christian era to trade spices, gems and ideas with their counterparts in Cambodia, Java, Bali and Siam.”

The situation had other ironies. Indian scholarly interest in Southeast Asia from the second decade of the twentieth century had come about as awareness of French and Dutch archaeology and epigraphy in the region spread to India. Indians gradually became aware of the Buddhist and Hindu past of ancient Cambodia with many inscriptions in Sanskrit, the Ramayana and the Mahabharata as referral texts, as also a vast iconography and symbolism that related to India. Many Indian scholars saw these as ancient Indian colonies established by settlers and migrants. Others used the term, ‘colony’, but also spoke of evidence that suggested that this was a cultural zone rather than an arena of political domination or economic exploitation. Perhaps the existing scholarship -- both in India and elsewhere -- was only slowly advancing in the first half of the twentieth century to  identify a greater extent of local involvement and agency in this widespread use of Indian icons, language, scripts, mythology and so on. The term, ‘soft power’, was coined much later — towards the end of the 20th century. Yet it has an obvious relevance to India’s profound presence in Southeast Asia in the first millennium and later. But there were also even larger questions that interested scholars both in India and in France: how was it in an area so close to China that an Indian cultural, religious and intellectual spread was so visible?

The New York Times reported in 1992 that the Indian presence in Cambodia has “sparked one of the angriest debates of modern art conservation. Depending on the expert [who is] asked the question, Angkor Wat is either being restored to a lost glory or is being irreversibly damaged.” While conservation methodology was one issue, there were even more substantive political factors at play. The 1980s was a time of great polarization in the world of high culture. The US withdrew from membership of the Unesco in 1984. The United Kingdom followed suit. Many issues arising from the Cold War were involved but former colonies asserting themselves in international platforms was also a factor.

With the end of the Cold War geopolitics changed, once more. The listing of Angkor in the Unesco World Heritage list meant that the issue gradually resolved itself from the 1990s onwards. The French, Japanese and others slowly returned. In the initial years, older proprietary attitudes of the former colonials persisted. A report in The New York Times was to say, “The French don’t want the Japanese... and the Japanese certainly don’t want the French... And the French and the Japanese don’t want the Indians.” This gradually faded as Cambodian institutions came up and asserted themselves. The ASI, thus, remains in Angkor as another reminder of the millennia-old contacts between South Asia and the ancient Khmer. In geopolitical conflicts, the past will invariably figure in the present.

The author is a former High Commissioner to Singapore and Pakistan.