What Trump seeks is personal glory, Kim might connive at that with token concessions that Trump could then hail as major achievements 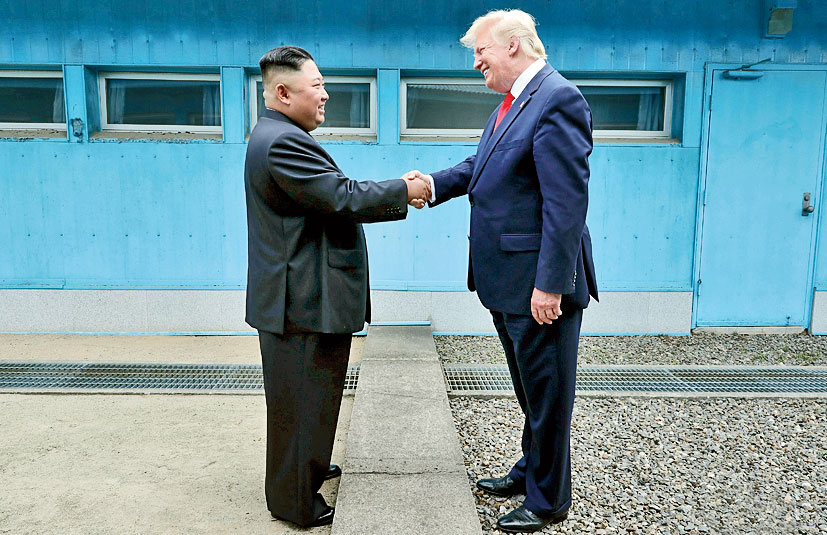 Trump expected his 2018 Singapore summit with Kim to be swiftly followed by a full and complete accounting of North Korea’s weapons of mass destruction with US and North Korean negotiators hammering out the details of “complete, verifiable, irreversible denuclearization”. That did not happen.
AP
Sunanda K. Datta-Ray   |   Published 13.07.19, 12:16 AM

As the Iranian crisis threatens to boil over, it would seem that the former British ambassador to the United States of America may not have been too far out in dismissing Donald Trump as “diplomatically clumsy and inept”, “insecure” and “uniquely dysfunctional”.

Obviously, the US applies vastly different yardsticks to Iran and North Korea, whose leader, Kim Jong-un, Trump mocked until only the other day as “Rocket Man”. Now, Kim has been invited to Washington and is complimented on writing “beautiful” letters that make Trump feel like ‘falling in love’. The contrast lends credence to the suspicion that the US President is courting Kim in hopes of winning the Nobel Peace Prize.

Not that India has any grounds for complaint. George W. Bush Jr, who wondered (the joke went) why India and Pakistan were fighting over a sweater (cashmere) and thought the Taliban was a band, legitimized India’s nuclear status to some extent. Why? We know from the record he liked and trusted Manmohan Singh and that the regard was reciprocated.

But was that enough for his secretary of state, Condoleezza Rice, to magnanimously offer to make India a “great power”? Some Indians might of course believe we have been a great power since Vedic times and that American acknowledgement was long overdue. But the US must have had its own compulsions.

Robert D. Blackwill, Bush’s ambassador to India, claimed the President was mesmerized by the world’s biggest democracy. “A billion people in a functioning democracy!” he supposedly exclaimed. “Isn’t that something? Isn’t that something?” Bush himself more prosaically — and perhaps more honestly — told the Asia Society on the eve of visiting India that the rising purchasing power of India’s expanding middle class meant buying more Domino’s pizzas, Whirlpool washing machines and other American goods. The larger motive emerges in Deep K. Datta-Ray’s The Making of Indian Diplomacy where he says “... the ultimate purpose was to... make India a tool in that archetypical modernist game the US excels at: containment.” The double intention was “to contain India and use New Delhi instrumentally in an attempt to contain China.”

The purpose of this diversion is to establish that reasons of State underlie the actions of even the most eccentric or whimsical of rulers. Just as Bush’s warmth for India could be traced to economic and strategic reasons, the contradictions of Trump’s policy on Iran and North Korea can also be explained in terms of his own priorities.

His recalcitrance on the 2015 Joint Comprehensive Plan of Action, called the “Iran Deal”, can be explained partly by the urge to spite the deal’s architect, his predecessor, Barack Obama (as also over Obamacare), and partly by the desire to placate his Arab allies who are Iran’s sworn enemies. The Shia-Sunni split can mean nothing to Trump or his all-powerful son-in-law and senior adviser, Jared Kushner, but both have good reason to prize the Arab alliance. Saudi Arabia is by far the biggest buyer of US arms: the $110 billion deal of 2017 will mean sales of tanks, combat ships, missile defence systems as well as radar, communications and cybersecurity technology worth $350 billion over 10 years.

More to the point, Kushner’s reported friendship with the egregious Crown Prince Mohammed bin Salman may account for Riyadh’s acquiescence in Washington’s blind support for Israel at the expense of all moral and legal considerations as well as long-standing commitments to the Palestinians.

The pay-off is that having pulled out of the Iran deal last year, Trump now not only regularly threatens the Iranian leaders with “obliteration” but is also accused of pressuring the deal’s other signatories — China, France, Russia, Britain, Germany and the European Union — to renege on their commitments. Given this unilateral abrogation, it’s a moot point whether Iran is at fault in now breaching its undertakings regarding enriching and storing uranium or whether the original violation by the US followed by continuous provocations on land and at sea have freed Tehran from its obligations. Might usually being right in diplomacy, this legal aspect is unlikely to impact greatly on intergovernmental relations on the ground. But Washington’s steely hostility must be contrasted with its geniality to North Korea.

The surrounding hype gives the game away. Thanks to worldwide TV, a grinning Trump lumbering over the low cement ridge across the Demilitarized Zone between North and South Korea on June 30, 2019, with a shyly smiling Kim waddling beside his bulk was presented as an epochal event. It was said to be as historic as Neil Armstrong stepping on the moon on July 20, 1969, to deliver the resounding one-liner, “That’s one small step for man, one giant leap for mankind.” Similarly, by becoming the first US President to set foot in the Democratic People’s Republic of Korea, which is still formally at war with the South, Trump supposedly ushered in a more secure world.

Actually, all US calculations and time frames have collapsed. Trump expected his 2018 Singapore summit with Kim to be swiftly followed by a full and complete accounting of North Korea’s weapons of mass destruction with US and North Korean negotiators hammering out the details of “complete, verifiable, irreversible denuclearization”. Arduous and painstaking negotiations in an atmosphere of burgeoning optimism at this year’s second summit in Hanoi were expected to lead to the promised breakthrough so that the carefully-staged DMZ crossing would at once be internationally acclaimed.

It didn’t happen. Kim still has not delivered a time-bound schedule of its programme to destroy all weapons of mass destruction. Trump’s boast that North Korea is no longer testing nuclear weapons or long-range missiles is meaningless since the moratorium began even before the Singapore summit.

Moreover, shorter-range missiles are still being tested although the US has discontinued major military exercises with South Korea. The North continues to build nuclear weapons and missiles, and is believed to be more potent than it was a year ago. At Hanoi, Kim demanded sanctions be lifted in return for shuttering only one of the many nuclear plants on which his impoverished country has squandered billions of dollars. His only concrete concession was to allow the repatriation of some remains of American service personnel killed during the Korean War but he has stopped cooperating with the Pentagon’s human-remains recovery teams. Not only have there been no substantive talks in recent months, but reports indicate that some North Korean negotiators have also been purged and possibly killed.

North Korea is one of nine countries with nuclear weapons, only five of which are legally acknowledged, according to the Stockholm International Peace Research Institute. The three other ‘illegals’ are India, Pakistan and Israel. Japan can probably go nuclear at short notice. Apartheid South Africa dismantled its weapons to avoid a nuclear-armed black successor regime. It could be argued — and this may influence Kim’s thinking — that Saddam Hussein and Muammar Gaddafi would not have met such a sorry end if they had their weapons of mass destruction. The present distribution reflects the global balance of power at the end of the Second World War which many feel should be revised in light of current reality. But Trump’s US is hardly the most competent authority to be entrusted with that task.

The ups and downs of his relationship with Kim encourage misgivings about the stability of his leadership. So does his hostility to any legacy of his predecessor. What he seeks above all else is personal glory. Kim might connive at that with token concessions that Trump could then hail as major achievements if the Nobel Peace Prize is dangled before his nose. But, presumably, the International Atomic Energy Agency’s ever vigilant inspectors would put an end to any such attempted dodge.