Deity who made kings 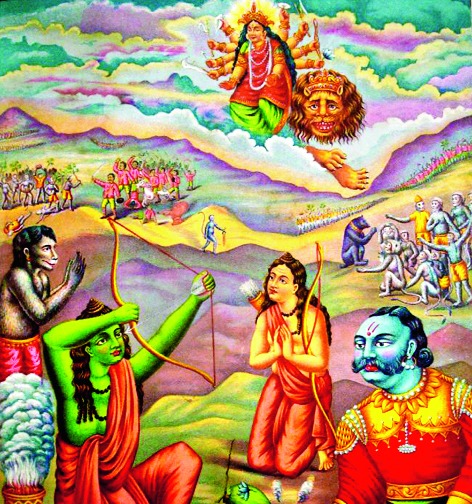 As a complete contrast to the recent censorship of the film, S Durga, appears Bihani Sarkar's scholarly and carefully researched book about Durga: a study of the history of the relationship of the mundane and spiritual significance of this principal goddess of India. Sarkar emphasizes the amazing story of how Durga's legend and mythology evolved and caused the development of Indian states and dynasties of kings. The interesting and absorbing book is replete with figures, maps and tables.

The earliest known images of Durga as the powerful Mahishasuramardini appear in the Kushana kingdom in the 2nd century, when the collapse of the Guptas in 542-43 CE marked the end of a unified civilization and the beginning of inter-state political rivalry and warfare. The author traces the development of Durga in literature from the early Skandapurana, the Ramayana, Harivamsha, Kathasaritsagara, the Mahabharata, and Devimahatmya. Sarkar traces the shift from Vaishnavism to Shaivism and the rise of heroic Shaktism. She draws a parallel of the episode in the Mahabharata in which the war-god, Skanda, is granted weapons and gifts by the gods with that in Devimahatmya, in which the goddess is granted weapons and ornaments by the gods.

The Amarakosha, composed in the 4th century, mentions Kali, Chandika and Durga among the names of Parvati, deities who, among various other regional goddesses, were gradually seen as aspects of Durga. Worshipped in the Shaiva tradition as Parvati and in the Vaishnava tradition as Nidra or sleep, Durga in Devimahatmya is the embodiment of all gods and goddesses, as the light of each god forms a part of her body.

The goddess also appears in Buddhist works: in the Saddharmapundarika as Avalokiteshvara. A thousand years after Ashoka, the Pala kings were proponents of Vajrayana and actively promoted Shaktism. (Tara was the deity Dharmapala emblazoned on the ensign of his house.) The assimilation of Durga with local goddesses can be discerned by the 7th century (in the dynasty of the Chalukyas). At last, in Devimahatmya, composed in the 8th century, Durga is presented as a syncretic deity.

Sarkar expands her dissertation with the Shakta legends of the currently popular Devimahatmya, in which the goddess is worshipped for protection "from eight situations leading to death, being trapped in a forest, in fire, among bandits, captured by enemies, chased by wild animals, imprisoned by a ruler, caught in a storm at sea, and in the middle of weapons in battle". "In these situations, it teaches that if the eulogy to the goddess is chanted, the person in danger will be freed. Before the Devimahatmya no other legend of the goddess was so forcefully advocated as having the power to affect real conditions of crises if ceremonially recited and heard." The Kathasaritsagara of the 10th century contains many Shakta legends and it is then that her assimilation becomes more fully manifest.

The author regards myth as a source of history (as did Sister Nivedita in her sociological studies of Indian life, as myths were used to explain and justify changes in religion). Legends have it that great kings established their mighty empires because they were granted kingship by Durga. In the Ramayana and Mahabharata, particularly in Bengali versions, Rama and the Pandavas are shown to have worshipped Durga: Rama, after the capture of Sita, and the Pandavas, when they are in exile before the Kurukshetra war to regain their kingdom.

In the Ramayana, Rama worships Durga and acquires the boon of victory in the forthcoming war in Lanka. Each day of Navaratri (nine nights) is explained as a day of his battle, with Ravana's death on the ninth. On Saptami (seventh day), Chandika would enter Rama's bow and empower it. Sarkar gives examples of evidence of the power of the goddess, evoked by symbols of war such as weapons and ensigns, which were flaunted by the king. On Ashtami (eighth day) he would begin to confront Ravana, and on the juncture of Ashtami and Navami, Ravana would be frequently decapitated but able to refresh his heads, and on Navami afternoon, Rama would kill him. On Dashami (tenth day) he would celebrate his victory.

In the Mahabharata, Yudhisthira mentally invokes Durga for her blessings. She appears to the Pandavas and grants them boons of victory. Again in the Bhismaparva of the Mahabharata, when Krishna sees the opposing forces of Dhritarashtra assembled for battle, he advises Arjuna to recite the hymn to Durga for victory over enemies ( shatrunparajaya). She appears to Krishna and grants their victory.

The main thrust of this book is Sarkar's discovery of Durga as the principal deity of kings and the source of their power and authority. The performance of the rites of the goddess was thought to be conducive to the success of a king in an arduous campaign and to the destruction of a hated rival. During the Navaratri celebrations in Madurai, Meenakshi, the kuladevi of the Raja of Ramnad, received the buffalo sacrifice on Panchami with a procession of the king to her temple. The book presents Durga as the chief power behind sovereigns in the history of Indian state formation. Even as recently as the 20th century in Nepal, the incarnate form of the goddess in the kumari was believed to sanctify the king. This book, the result of 10 years of research, is the first detailed historical study of the evolution of the cult of Durga and the role it played in shaping civilizational ideals in India.