In times of crises, the people and the economy cannot be left to the vagaries of the market 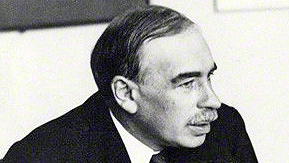 The world of economics silently celebrated the 75th death anniversary of Lord John Maynard Keynes on April 21, 2021. On this day, Keynes passed away in Tilton, Sussex in 1946. Keynes — born on June 5 — was the greatest economist of the 20th century who wielded considerable influence on economic policymaking not only in his country but also across the globe.

While Adam Smith, the renowned 18th century Scottish philosopher-cum-economist, is regarded as the father of modern economic science, David Ricardo, another gifted man, may be credited with building the fundamental structure of it. Smith, Ricardo, Malthus, Mill (Jr.), Marx and several other economists are clubbed under the nomenclature, ‘classical economists’. The Classical School advocated laissez- faire — free market economy — and considered that government intervention in economic life is ineffective or harmful.

From the days of Smith-Ricardo, the march of capitalism was unstoppable. The Great Depression of 1929 and its attendant effects that engulfed the major capitalist economies dealt a severe blow to the classical ideology. Classical economic theories, propagated since the days of Smith-Ricardo and their disciples, were found to be inadequate in explaining the prevailing crisis of the late 1920s and the early 1930s.

It was at this juncture that Keynes put forward his macroeconomic theory that not only revolutionized the realm of economic thought but also helped in the resurrection of a capitalism blighted by depression and mass unemployment. Keynes’ theory — laid out in The General Theory of Employment, Interest and Money — was sharply different from the classical theory put forth by his predecessors.

As per the Keynesian macroeconomics, demand deficiency in the economy is the fundamental reason behind the sustenance of unemployment equilibrium. It needs to be mentioned that the main components of aggregate demand in an economy are private consumption and private investment expenditures. During an economic depression, people’s purchasing power is low and there is limited scope of raising consumption expenditures. The private sector’s profitability is also low and it is not in a position to increase its investment expenditures. Under such circumstances, the role of public policy in generating demand assumes importance. Keynes advocated that demand deficiency and persistent unemployment can be tackled if the government were to chip in by undertaking various public investment programmes, thereby raising demand and public expenditure. The government, for instance, may invest money in building roads, bridges, canals and so on; such expenditures lead to job creation and income generation. And once people’s incomes increase, consumption spending rises and this, in turn, induces private investors to raise their labour demand and production.

While the classical theorists discouraged active government intervention in the economy, Keynes, on the other hand, highlighted the pivotal role that public policy — government expenditure and budgetary policy — can play in ameliorating the economic crisis. The Keynesian demand management policies worked successfully in many countries for several decades. From the 1970s, however, the efficacy of Keynesian policies in dealing with the unemployment problem came under scrutiny as stagflation emerged in many countries. In academic circles, especially in the United States of America, the Keynesian policies were discredited and interest in the classical economics was revived. Since the collapse of communism in the Soviet Union and in Eastern Europe, most economies, including that of India, have been forced to downsize their governments under pressure from the US-IMF-World Bank axis. The State has increasingly been abdicating its roles in favour of markets.

It is against this backdrop that we need to take a relook at Keynesian economics and acknowledge the decisive role that public policy and the State can play during the periods of crisis. The US, which banished Keynesianism in the aftermath of the stagflation syndrome, had to take refuge in Keynesian policies in the wake of the 2007 recession. The US government was called upon to bail out financially bankrupt companies and infuse blood into the economic system through greater public spending. The present pandemic has brought another severe threat before the world economy. Millions of people, especially in the densely populated countries where the informal sector is the major source of livelihood, have severely been hurt as a result of the pandemic and lockdown. The critical role of the government and public spending has come to be realized, once again. The Nobel laureate, Abhijit Vinayak Banerjee, has argued in favour of cash transfer from the government in order to inject demand and purchasing power as well as to battle poverty as a result of job loss.

At present, India has been undertaking a mass vaccination drive. Once again, the importance of the State has come to the forefront. While there is a growing clamour for free vaccines and the delivery of adequate public health service, there is also discussion on the need for government spending and funding of research and development toward the development of vaccines by private pharmaceutical companies.

In times of crises, the people and the economy cannot be left to the vagaries of the market. Keynes is, indeed, our last resort. As long as mankind and market exist, Keynes would continue to remain relevant. That is why even after 75 years of his demise, Keynesian pills are still effective to counter economic distress.

Santanu Ghosh is head of the Department of Economics, Maulana Azad College