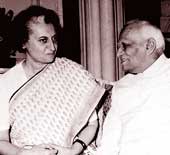 Osama bin Laden?s intervention in the American presidential election was a bit like Lyndon Johnson?s vow to ensure that ?no harm comes to this girl? before Indira Gandhi?s re-election in 1967. ?We must get her elected,? he told the Indian ambassador to the United States of America. ?You tell me what to do. Send her food? Attack her? I?ll do whatever you say!?

The al Qaida chief did not need to ask anyone what to do. His televised appearance helped to win the election for George W. Bush by highlighting the terrorist threat and the war in Iraq. Flying in the face of logic, American thinking regards the two as synonymous. Therefore, security, and not Republican mismanagement of the economy, dominated the agenda. So inevitable was the political consequence of this obsession that Walter Kronkite, the veteran television anchor, claimed in a Larry King Live show some days before voting that he was ?inclined to think that Karl Rove, the political manager at the White House, who is a very clever man? probably set up bin Laden to this thing.?

Leaving aside conspiracy theories of a kind that Western commentators usually ascribe to the subcontinent, the increase in the Republican majorities in both the Senate and House of Representatives is bound further to invigorate neoconservative fundamentalism which is as focussed and emotion-driven as any religious fanaticism. Their crusade flouts every canon of international law and justice. In Korea and Vietnam, the US could clutch at the fig leaf of a defence arrangement with a party to the conflict who claimed to be the victim of aggression. Even that feeble justification is denied in Iraq where the Americans and their British allies are plain outlaws. But the morality of trying so desperately to crush Iraqis obviously will not trouble an imperialism that is sustained by evangelical righteousness. Nor the suffering that it inflicts on inoffensive foreigners, notably in west Asia. But the Bush lobby might pause in its heady hour of triumph to consider the economic consequences for their own land. The sequel to bin Laden?s speech that Al Jazeera television released a few days later has already given fair warning of the peril of dramatizing the Day of Judgment instead of considering federal discount rates.

War costs were estimated two years ago at between $50 billion and $60 billion. Now, the effort is likely to mop up $225 billion by the end of next year. According to bin Laden?s accounting, every dollar that al Qaida spends costs the US $1 million in economic fall-out and military spending. He claims to have spent $500,000 on ?the event? ? the Nine-Eleven attacks ? that cost the US more than $500 billion. Be that as it may, Bush has converted Bill Clinton?s $236 billion budget surplus into a $415 billion deficit. The national debt is nearing the $7,400 billion statutory limit. Understandably, bin Laden talks of ?bleeding America to the point of bankruptcy?. It is a strategy he understands, having previously used it against the Soviet forces in Afghanistan. The nearer he gets to that aim now, the more will long-suffering Iraq be mulcted to pay for America?s overpowering global ambitions.

None of this may have been very different if John Kerry had won the White House. True, on the campaign trail he denounced Bush?s militarism as ?the wrong war at the wrong time in the wrong place?. But he did vote for the war when support mattered. And the future he envisioned did not promise to be very different since he also announced resoundingly, ?Terrorists are going to be hunted down and killed.? The Democrat camp accused Bush not so much of doing the wrong thing as of not doing enough of it. Kerry?s constant refrain was that the US should have finished off bin Laden in the Tora Bora caves instead of ?outsourcing? the task to the Afghan warlords.

While the outlook for the world would have been just as bleak with a different election outcome, one can be glad the Democrats have been spared the hard job of saving the economy, extricating troops from Iraq and regaining global trust. None of this will bother the neoconservatives who will now further redefine a US whose grotesque ikons are Guantanamo Bay, Abu Ghraib and 100,000 dead Iraqi civilians, mostly women and children killed in American aerial attacks. ?We invaded Iraq to free Iraqis from a dictator who, by some accounts, oversaw the killing of about 300,000 of his subjects ? although no one has been able to verify more than a small fraction of the figure,? writes Scott Ritter who was a senior United Nations weapons inspector in Iraq. ?If it is correct, it took Saddam decades to reach such a horrific statistic. The US and UK have, it seems, reached a third of that total in just 18 months.?

Murderous militarism is compounded by the stench of corruption. And not only because of the $7 billion Iraqi oil contract awarded to Kellogg Brown and Root, a subsidiary of the Texas-based Halliburton energy conglomerate that Dick Cheney, the vice-president and a leading neo-conservative, used to head. The invasion and occupation of Iraq is obviously a detail of a bigger pattern for it cannot be accident that the effort has consumed 85 per cent of the funds set aside for Bush?s ?global war on terror?. It is almost as if bin Laden provided only the excuse for Bush?s real purpose.

There is a phoney ring to the entire war. More than 1,000 Central Intelligence Agency operatives were sent to Iraq to look for weapons of mass destruction when their masters knew perfectly well that Saddam Hussein had been disarmed by the late 1900s. Greenpeace has recorded that while hundreds of American troops were detailed to guard Iraq?s oil installations, not a single soldier was on duty at the Tuwaitha nuclear power plant. Treasure houses of Iraqi antiquities were similarly left open to looting. Bush?s charge that someone had spirited away the lost 380 tons of powerful explosives before the Americans invaded in March 2003 fell flat on its face when eyewitnesses recorded how US troops broke open UN seals to enter the bunkers where the material was stored. As late as October, Iyad Allawi, Iraq?s puppet prime minister, complained to the International Atomic Energy Agency that 500 such sites had been ransacked. The lost explosives can destroy aircraft, demolish buildings, make missile warheads and trigger nuclear weapons. Thus, US rule has handed over to the terrorists the weapons of mass destruction that Saddam did not.

Iraq is a dangerous obsession for the US and because of that, the world is now a more dangerous place. Given neo-conservative bigotry, we must be prepared for a modern global equivalent of the Salem witches and McCarthy?s infamous bullying. Yes, terrorists will be hunted down and killed, but anyone can be branded as such. This is a highly selective game. Iran and North Korea are on the axis of evil but not Pakistan though it is where the latest bin Laden tape surfaced, and though Abdul Qadeer Khan, the Pakistani scientist, was at the heart of a global blackmarket in nuclear secrets. To quote the Saudi Gazette, ?If this is a war on terrorism, who are the terrorists and who are the terrorised??

The answer will vary from day to day, depending on the exigencies of neo-conservative politics, giving al Qaida constant reason for hitting back. As the CIA?s one-time prot?g? and partner, bin Laden understands American motives and tactics better than others. He is not to be taken lightly when he warns that the provocation has not disappeared and that as America undermines his security, he will undermine America?s. Americans have voted for Bush and the rest of the world must bear the consequences.