Covid-19 has challenged hierarchies in education 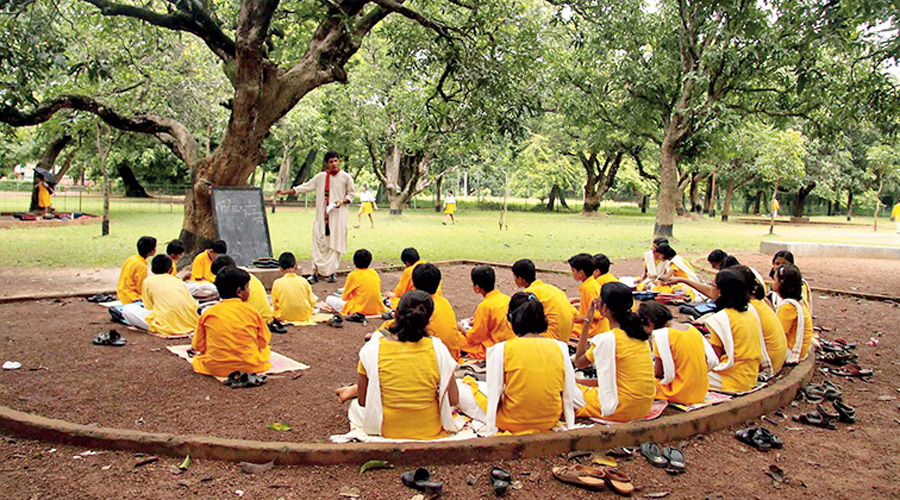 Students at an Open Air class inside Visva-Bharati University campus on the Teachers' Day at Santiniketan.
Telegraph picture
Samantak Das   |   Published 28.08.20, 01:54 AM

In his magnificent and deeply moving essay, “What the Great Pandemic Novels Teach Us”, published in The New York Times exactly a month after Lockdown 1.0 was imposed in India, Orhan Pamuk ends his analysis with these words: “For a better world to emerge after this pandemic, we must embrace and nourish the feelings of humility and solidarity engendered by the current moment.”

Such humility and solidarity lay at the heart of what both Rabindranath Tagore and Mohandas Karamchand Gandhi saw as the best way forward, especially when it came to education. “Basic education”, nai talim or buniyadi siksha — most fully articulated by Gandhi at the Wardha Education Conference of 1937 — envisioned school as a space where young people would be taught (in addition to the three Rs, social studies, music, painting, and so on) the values and virtues of cooperative work, whether through growing vegetables, spinning cotton, or other productive manual activities suited to local conditions. The teachers of such a school would work alongside their wards, fostering a spirit of kinship and fellow-feeling among individuals from disparate backgrounds, be these social, economic, cultural, or otherwise. The income generated from such activities would pay for the upkeep of the school, and help in paying the salaries of teachers and other staff. Critics of this scheme of education pointed to the potentially deleterious effects of making young children perform manual labour, and the danger of such income-generating activities overturning the essential pedagogic function of a school. These were valid criticisms and probably paid a significant role when the Gandhian scheme of basic education was quietly buried after the implementation of the National Policy on Education of 1968. Yet, despite its drawbacks, Gandhi’s insistence that education is a cooperative endeavour, in which both students and teachers must participate, still resonates.

Unlike Gandhi, Tagore did not see education, especially school education, as needing to equip students with income-earning skills but he, too, stressed the need for education to combine the dry theory of the classroom with the rich lived experience of engaging with the real world outside a school’s walls. Not for nothing were classes in his school held, whenever possible, in the open air. Like Gandhiji, Rabindranath saw education as a cooperative enterprise, one where students and teachers alike would be engaged in the joyful pursuit of understanding and knowledge, leading, if the endeavour was successful, to something akin to wisdom. Rabindranath had much greater experience than the Mahatma when it came to matters educational, having started a school in rural Bengal in 1901, where he was, in his own words, “fortunate in having almost all the naughty boys of the neighbourhood and even from different parts of the country… only the most intractable boys came so that I had an interesting gathering of just those children who are most preached against in the Sunday-school books.” In the same lecture, delivered in Japan in 1924, Rabindranath goes on say how “I became the playmate of my students and shared their life completely” and how he tried “to let them realise that though we have our difference of age, yet, like wayfarers, we are travelling the same path together — old and young, we are working for the same goal.” In his lectures, talks with students and teachers, essays, and compositions in both prose and verse, Rabindranath kept harping on the vital importance of “the cooperative principle” in every sphere of human activity, especially education.

Sadly, however, what passes for education in our country today is predicated less on cooperation and far more on what the iconoclastic Brazilian educator and philosopher, Paulo Freire, famously described as the “banking concept” of education, where “Instead of communicating, the teacher issues communiqués and makes deposits which the students patiently receive, memorize, and repeat… in which the scope of action allowed to students extends only as far as receiving, filing, and storing the deposits… [where] knowledge is a gift bestowed by those who consider themselves knowledgeable upon those whom they consider to know nothing... [where] the teacher presents himself to his students as their necessary opposite; by considering their ignorance absolute, he justifies his own existence.” A few lines later, Friere makes the same point made by Tagore, and Gandhi, decades earlier, “Education must begin with the solution of the teacher-student contradiction, by reconciling the poles of the contradiction so that both are simultaneously teachers and students.”

We humans are intensely social animals, and cooperation is as much a part of our essential selves as competition. Any student can tell you that cooperation does exist, even in the most hidebound and reactionary educational establishment, but this cooperation is typically confined within the two broad groups of students and teachers: students cooperate with students, and teachers with teachers (though, I suspect, less so) — cooperation across the student-teacher divide, between those who teach and those who are taught, is rarely to be found, even though this is what Rabindranath, Gandhiji, and Friere saw as a consummation devoutly to be wished. This is where the unprecedented situation created by Covid-19 offers us an opportunity to challenge old ways of being and doing when it comes to the realm of education. Deprived of access to libraries, books, laboratories, equipment, and all the paraphernalia of the pedagogic process, and dependent on electronic means to carry out academic activities and transactions, teachers and students are discovering that perhaps the only way to continue academic activity is through cooperative action — with not just students coming to each others’ aid but by joining hands with their teachers to keep educational institutions functioning in this strangely isolating time. This may not always be the case in schools, but for institutions of higher education this is a daily lived reality. Speaking from personal experience, students have helped to locate and download texts, set up virtual meetings, collected and collated questions to be put to the teacher (me), and assisted in a hundred other ways to keep our interaction alive. Teachers, in turn, have perforce become more democratic, more consultative, more interactive, when it comes to such transactions. We all miss the give-and-take of the classroom or lecture theatre, everyone is irritated by the vagaries of internet connectivity, and the tricks played on us at the most inopportune moments by our magic electronic devices; yet all of us are now aware that we are travelling the same path, trying to overcome the same obstacles, striving towards the same goal. Hierarchies are being challenged, with students contributing as much, if not more, to the conducting of classes, locating online resources, distribution of study material, the list goes on. Cooperation, not competition; a journey undertaken together, not separately; a partnership of students and teachers predicated on mutual trust, not casual suspicion; humility and solidarity instead of arrogance and divisiveness. Of course this is not true for every student or every teacher; of course old habits sometimes resurface, but things seem to be changing, to be moving in the direction envisaged by the great humanitarian thinkers whose words have been quoted earlier. Will this last once things start limping back to something resembling ‘normal’? I have no idea, but, as always, it is up to us to make that choice.