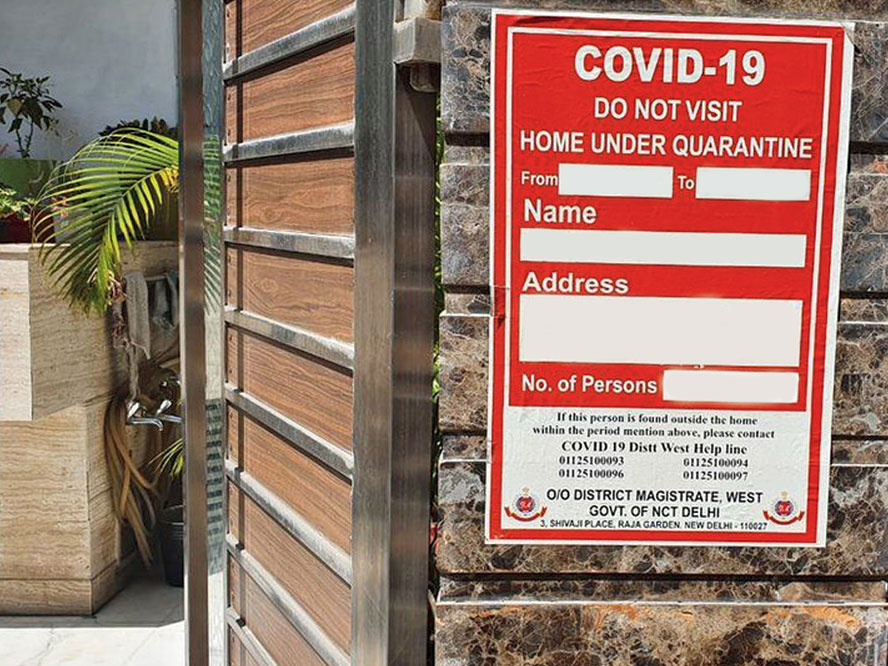 They were very pleasant and encouraging but before they left they pasted up on our wall, just inside the gate, a bright red notice the size of an A4 sheet. ‘COVID POSITIVE HOME ISOLATION’ it said in capital letters along with my name and the terminal date of my mandated isolation: 23 June.
Telegraph picture
Mukul Kesavan   |   Una   |   Published 28.06.20, 01:32 AM

The narcissism of bourgeois life is concealed in normal times by good manners but becomes obvious in moments of crisis. When I discovered I was running a temperature one afternoon late last month, my world shrank to me. The middle-class Indian’s ability to quarantine painlessly via digital payments, vendors at the gate and an inherited gift for social distancing induces an expectation of immunity. I couldn’t believe that I had a fever after the endless handwashing, the monotony of hour-long walks up and down a short driveway, the double-valve N99 masks I wore when I ventured outside. Having barred virus-bearing people and limited the intrusion of the outside world to things, I had systematically sanitized those things. I remember scrubbing the polythene surface of shrink-wrapped prawns with Scotch-Brite and Pril and wondering, but only for a second, if I was going too far.

But there it was: 99.5. (Fahrenheit, in case you’re alarmed. Like others my age, I’m inconsistently metric.) Disbelief didn’t mean that I didn’t know what to do. I knew exactly what to do. I felt like a character in a play that I hadn’t expected to be cast in, but I knew my lines. I walked up to my study, called my wife (who was in the back bedroom) on WhatsApp and told her I was isolating. We were both over sixty, we had read the papers and watched doctors talk about vulnerable old people. Now that I had a fever, we knew that sixty-plus wasn’t a state of mind, it was an objectively bad number.

Many phone calls later, the WhatsApp consensus was that it couldn’t be Covid. The unspoken subtext to the reassurance was, how could someone whose lockdown life had been as timorous and sheltered as mine, have got It? This seemed vaguely insulting but I wanted to be reassured and I wasn’t in a position to choose. It had to be something else. Typhoid, perhaps? Or chikungunya? I had endured chikungunya a few years ago. It had been a week of raging fever and three months of arthritis but given the alternative, I would have embraced it like an old friend.

Seven days later, I still had a fever. I didn’t have a cough, or shortness of breath and I could still taste my food. I took to sniffing an aftershave bottle to check on my sense of smell. My cousin, our family doctor, told me that this was the best time to test. We applied for a test online, worrying what the neighbours would think if moon-suited lab technicians walked out of an ambulance into our gate. As it happened, when he did arrive, he came in a mask and visor and discreetly suited up inside. The test consisted of him inserting things that looked like cotton earbuds mounted on very long stalks up my nose and down my throat. He made me say ‘aaah’ the moment he made the second insertion, like an old-time doctor about to paint my throat, only deeper. I gagged and made terrible strangled sounds, completely disproportionate to the minor discomfort I was experiencing. I thought I heard my wife laughing in the garden.

The result was in by the evening. I was Covid positive. The WhatsApp consensus evolved in the face of brute reality. Yaar, ninety per cent of all cases are ‘mild’ and you have no other symptoms. More importantly, said my doctor friends, you have no co-morbidities. I hated the word: it sounded like ‘parallel reasons for dying’. I needed the one symptom I had, the fever, to break and so I began taking my temperature every forty-five minutes, as fixated on my thermometer as a child on a lollipop.

My wife and I conferred on the phone and my isolation became more rigorous. Not only was my food left outside a closed door, nothing I used left the room except as garbage. My dishes didn’t return to the kitchen, and I took to washing them and my clothes in the washbasin of my bathroom. Struggling with a food stain on my T-shirt I tried, self-pityingly, to feel like a paying guest and failed.

There was excitement around the corner. By law, laboratories have to inform the government about people who have tested positive and the application forms you have to fill to get a test include your address and your phone number. The day after I tested positive, I had a call from the Chief Surveillance Officer, the government doctor in charge of monitoring Covid cases in my neighbourhood.

Feeling guilty of Covid, I told the doctor in lavish detail about the rigour of my self-isolation. He was unimpressed. You are over sixty, he said, and it wasn’t a question. There is no self-isolation for over-sixties. Because you are a mild case, you have to go for five days to a public quarantine facility. Where, I whispered, barely managing the monosyllable, all fluency spent. We will take you, he promised, to the Chaudhary Brahm Prakash Ayurved Charak Sansthan in Najafgarh. There was a pause. Can’t I stay home, I asked. He laughed indulgently. You are a nervous gentleman, he said. Don’t worry. They will take care of you.

That night, everything about my study and its bathroom seemed magical: the paper-jammed printer, the shifting commode seat, even the child’s bed with the inconvenient guard rails that I swore at every night. By the next day, though, this maudlin attachment seemed premature; the administration’s attitude towards home isolation had changed.

I was visited by its Home Isolation team which consisted of a police woman in uniform and another woman fully costumed in PPE. They made us sign two affidavits, gave me a small bottle of cleansing chemical and a pamphlet on effective isolation. They were very pleasant and encouraging but before they left they pasted up on our wall, just inside the gate, a bright red notice the size of an A4 sheet. ‘COVID POSITIVE HOME ISOLATION’ it said in capital letters along with my name and the terminal date of my mandated isolation: 23 June. It wasn’t very adhesive; it fell off the wall and we had to stick it up again with masking tape.

I was lucky. My encounter with the novel coronavirus felt like a low-temperature flu that went on for a bit. Three days after I tested positive and on the eleventh day after the fever began, it broke. I spent another fortnight in the study counting off the days to the 23rd. Four days short of that date there was another alarm: Delhi’s lieutenant governor overruled Arvind Kejriwal’s government and ordered that all home isolating patients be quarantined in public facilities. The order was duly notified and for a day I relived a re-heated nightmare: the prospect of serving out the rest of my sentence as a guest of the State. I shouldn’t have worried; this was history repeating itself as farce. The Lt. Governor backed off and I settled into my study again.

The day after my isolation ended, a government dispensary called to say that I could collect my discharge certificate so long as I brought a picture of the red isolation notice on my phone. Would there be another test, I asked? No, he said. Mindful of the importance of collecting government

paper that tied up loose ends, I went to the dispensary and showed the doctor there a photo of my scarlet letter. She handwrote and stamped a discharge certificate on a formally printed pink card.

It read exactly like the merit certificates my school used to award. “This is to certify that Mr Mukul Kesavan has successfully completed his period of isolation. On examination he is asymptomatic.” It had been a quick, socially distanced examination, but I was content. I had traded in a menacing red notice for a mellow pink card; this felt like progress. The card clarified things. Those twenty-five days in my study had been an exam. And the South Delhi Municipal Corporation had just certified that I’d passed.