The hour of reflection

The world is plagued by a virus that should have united it. Instead, it has exposed the world’s ugly face 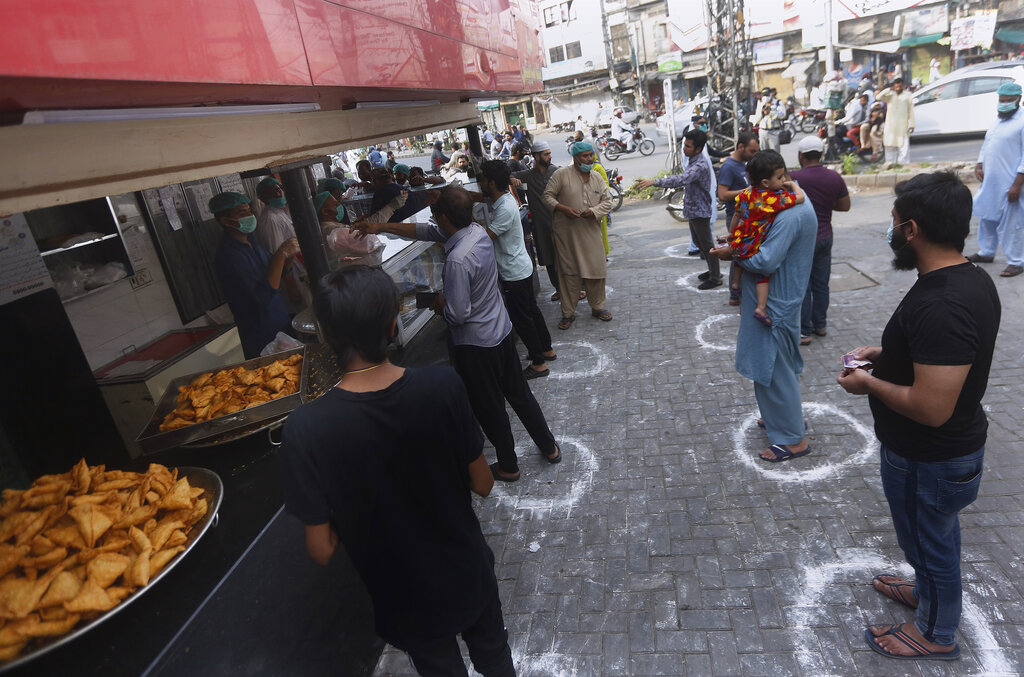 People maintaining a level of social distancing wait their turn to get traditional food from a bakery to break their fast on the first day of Ramadan, in Lahore, Pakistan. Saturday, April 25, 2020.
(AP Photo/K.M. Chaudary)
Mehmal Sarfraz   |   Published 28.04.20, 06:54 PM

Pakistan may have extended the lockdown, but restrictions were eased in mid-April. Some industries were allowed to open in order to generate economic activity while permission was also granted to mosques for congregational prayers in the month of Ramazan after negotiations between the government and religious scholars. It was decided that mosques would have to follow 20-point SOPs to prevent the spread of the coronavirus.

The first two weeks of the lockdown in Pakistan were successful to quite an extent in containing the spread of Covid-19. The government implemented the lockdown well for the most part. But things changed when Prime Minister Imran Khan — he was never really in favour of a lockdown — announced the easing of restrictions while extending the lockdown. Traffic increased; shops opened in violation of rules. This led to a spike in corona cases across Pakistan.

Last week, senior doctors in Karachi and Lahore appealed to the federal and provincial governments to reconsider their decision about relaxing the lockdown. They also appealed to the ulema, asking them not to allow congregational prayers. Doctors said that they would be unable to deal with the crisis if cases went up exponentially. Between April 16-21, there had been around a 40 per cent rise in corona cases. Doctors have warned that by mid-May, coronavirus cases in Pakistan may go up to 70,000. The Sindh government has revoked the permission for congregational prayers in mosques. The chief minister, Murad Ali Shah, said taking such “difficult decisions” are a government’s responsibility and that the decision was taken keeping doctors’ recommendations in mind.

Pakistan’s economy, which was already going through a rough patch, is likely to suffer even more. One of the reasons behind relaxing the lockdown was to generate economic activity, but this seems very difficult under the circumstances. Many people have lost their livelihoods, and more jobs are at risk. The Pakistani media are suffering too. They were struggling on account of censorship and the shortage of advertisement revenue due to the failing economy. The coronavirus outbreak has made things worse. The prime minister recently said that Pakistan’s media enjoy more freedom than those in the West, but the reality is the exact opposite. According to Reporters Without Borders’ World Press Index Freedom 2020, Pakistan has slid down three places and is now ranked 145 out of 180 countries. The RSF condemned the “brazen censorship” by the State, saying, “Distribution of newspapers, especially the leading daily, Dawn, has been interrupted”. Media outlets have also been threatened with the withdrawal of advertising. The signals of TV channels that gave airtime to Opposition representatives have been jammed.

Last month, Jang/Geo group’s editor-in-chief, Mir Shakil-ur-Rahman, was arrested by the National Accountability Bureau in a case involving a property that was purchased by the media mogul more than three decades ago. Mir Shakil’s arrest was condemned by media organizations as well as by the Opposition. He is still under arrest even though the case against him seems frivolous. His arrest is seen as another attack on press freedom and an attempt at silencing critical voices.

Then there is social media. As in India, we also have an online troll army that targets journalists critical of the ruling party. Discrediting journalists and the media have become a norm on social media. Most journalists privately admit that trolling takes a mental toll. There is no way to avoid it unless one quits social media. This is impossible, given that we live in the digital age.

The world is plagued by a virus that should have united it. Instead, the contagion has exposed the world’s ugly face. From objectionable remarks by the president of the United States of America about the virus originating in China to the xenophobia that has targeted a minority community in India, from Pakistan’s federal government taking digs at Sindh ruled by an Opposition party to an Indian film body warning artists in India not to collaborate with Pakistanis on Instagram, we are witnessing shrill nationalism and jingoism reign supreme even during these extraordinary times.

Life is uncertain. The coronavirus has made it even more unpredictable. Now that the lockdown has given us time to pause and take stock of our lives, we should try and make the best of it. If we cannot cut out the negativity from our lives even at a time like this, when will we be able to do it? Here’s hoping that we pause to think and reflect so that in the post-corona world, we may turn out to be better human beings.