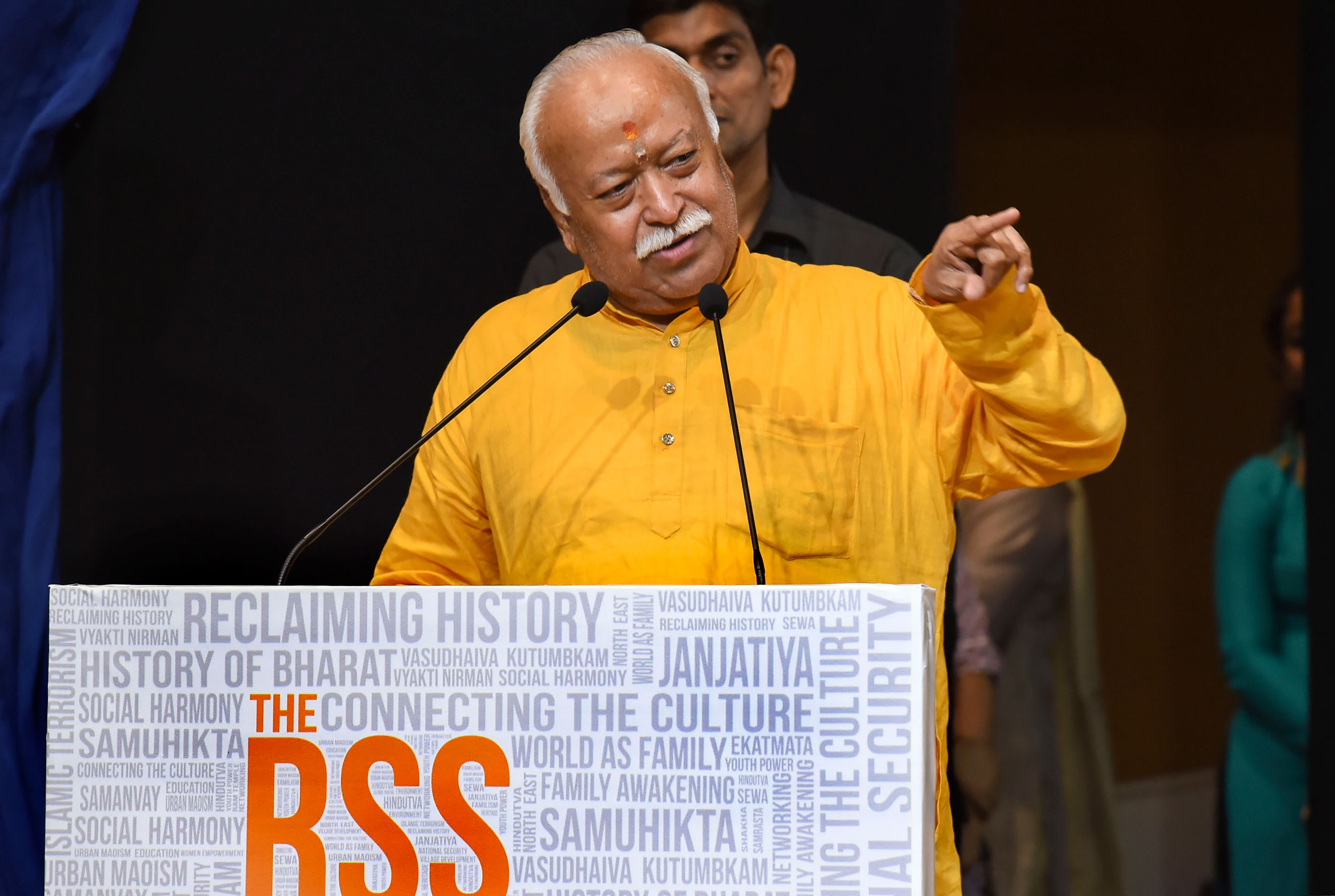 Children often vie with one another to be the favourite of their parents. The situation in India in the year that marks the 150th birth anniversary of the Father of the Nation is somewhat similar. Only, the game of one-upmanship being played is to establish which child loves the father the most. On October 2, the prime minister, Narendra Modi, wrote an opinion piece for The New York Times underlining why India and the world need Gandhi in present times. Not to be left behind, the Rashtriya Swayamsevak Sangh chief, Mohan Bhagwat, too, penned articles for leading dailies in several languages. This was striking since RSS chiefs in the past have avoided attention and chosen to work silently, but not so Bhagwat.

Last year, he had held a three-day long interaction with eminent citizens at Vigyan Bhawan. He has already interacted with diplomats, foreign journalists and released books on the RSS. The effort, some say, is a clear indication that the RSS chief is indirectly asserting ownership of the Narendra Modi regime. This may be why the RSS repeatedly points out that Modi was an RSS pracharak. The RSS, which generally shuns personality cults, finds itself in a tight spot when it comes to dealing with Modi, who has acquired a larger than life persona. The best way out thereby is to keep reminding people that it is the RSS which is the conscience-keeper of the Bharatiya Janata Party and that it is the former’s training that has shaped Modi.

It is often difficult to keep pace with the changing political fortunes in the southern state of Karnataka. There is a storm brewing over the Cauvery. But, for once, it is not about sharing the water in the southern river. PC Siddaramaiah, who has seen his share of both good and bad days, is now in a tight spot. Siddaramaiah has been lobbying hard to convince the Congress high command that he should be the natural choice for the post of the leader of the Opposition in the state assembly.

But party insiders claim that the real motive behind Siddaramaiah’s pleas was to keep the chief ministerial bungalow ‘Cauvery’, which he had not vacated even when HD Kumaraswamy had been hoisted as the coalition chief minister in Karnataka in 2018. Since the leader of the Opposition is a cabinet rank, Siddaramaiah could have staked claim over his favourite ‘Cauvery’ and continued living there. But it seems like Siddaramaiah’s thirst will remain unquenched. Sonia Gandhi has turned a deaf ear to his request. Siddaramaiah is now on his way out of the spacious house, which is set to be occupied by the present chief minister, BS Yediyurappa. That must hurt.

Some questions have no answers. Recently, at the opening of the Harkishan Singh Surjeet Bhawan — which will house the central school of the Communist Party of India (Marxist) — in the capital, the general secretary of the Communist Party of India, D Raja, stumped his hosts by asking whether they would continue to teach their cadre that the latter party is a revisionist one, which compromised with the bourgeoisie. Recalling his early days in the CPI, Raja said that he was taught that the CPI(M) was a sectarian party, adding that chances are that Sitaram Yechury and Prakash Karat of the CPI(M) were taught that the CPI is a revisionist outfit. The same question was then posed to Yechury two days later at a press conference. While admitting that this was not a question that the CPI(M) had considered, he focused on the fact that the two parties have had to mend fences to such a great extent that now they no longer contest against each other. Perhaps the first lesson that can be taught to Left cadres at the new school is the merit of a united house.

While his new house gets ready for his arrival, BS Yediyurappa has been temple hopping in search of some much-needed blessings to stay in power. The Karnataka chief minister is taking no chances since his stable resembles a snake pit with many of the members trying to flush him out of the hot seat. The upcoming bypolls for more than 15 assembly seats is another missile that could bring down his government which is hanging on by a thread. On the advice of his family and friends, Yediyurappa recently visited an ancient temple in Tumkur district where he spent several minutes meditating before being taken for a soothsaying session with the deity. But the outcome, as expected, remains a secret.