Advertisement
Home / Opinion / Chowkidars use liberalism’s words minus their universality

Theirs is the democracy of a khap panchayat, the patriotism of Pragya Thakur, the intellectual breadth of a troll’s timeline 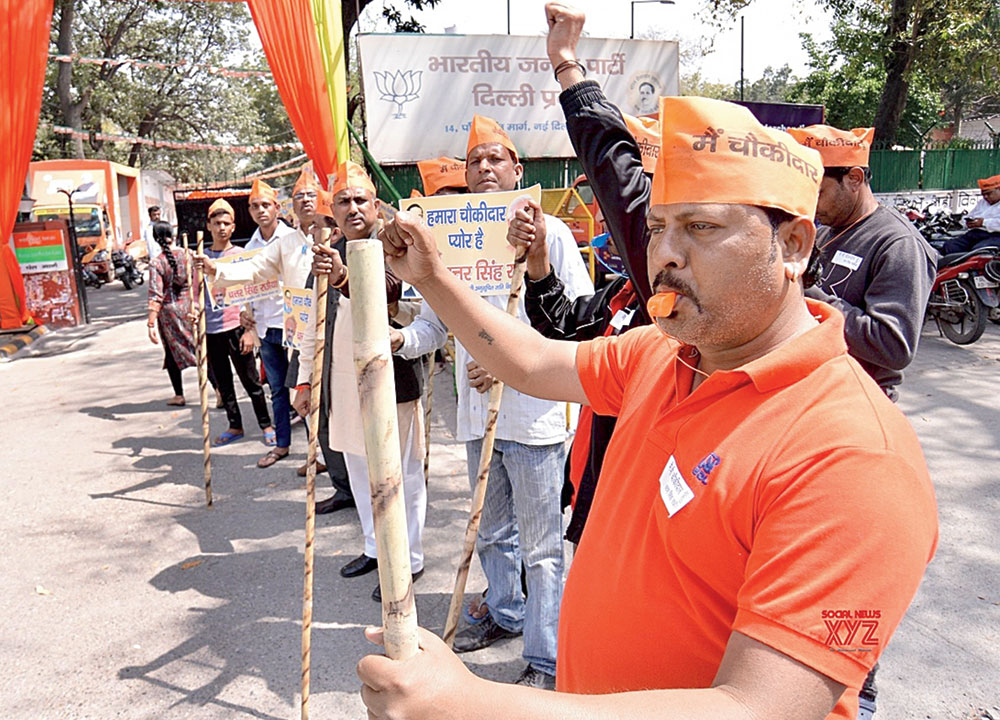 There was an amusing media moment a few days ago when CNN referred to India’s external affairs minister as ‘Chowkidar Sushma Swaraj’ because it assumed that her Twitter handle was the name she went by. Like every other obedient sanghi, Swaraj had embraced the ‘Chowkidar’ prefix in solidarity with the prime minister, who had cast himself as India’s guardian-watchman in one of his many self-branding forays. The spur to this solidarity was Rahul Gandhi’s insolent and surprisingly effective riposte, ‘chowkidar chor hai’ — the watchman is a thief. Hindutva’s hive mind responded to this insult to the queen bee by defiantly embracing the term.

This was appropriate, if not in the way the sangh and its supporters intended. Modi’s failure to ‘Make in India’, to create productive jobs, is nicely symbolized by the chowkidar, the sketchily uniformed, underemployed man whose function is to guard the consequence of his employer by defending his parking spot. But that isn’t the main reason why the term fits. All parties confess to who they are if you listen carefully: ‘chowkidar’ is the sangh’s confession.

In chowkidar, Hindutva has found its answer to the French Revolution’s ‘citizen’ and the Russian Revolution’s ‘comrade’. Comfortable people in India don’t think much about citizenship till elections roll around. Unless they’re trying to become citizens of some other country in which case they’re consumed by it. In India, citizenship matters at the margins, especially to the poor without documentation, because it can affect livelihood, security and freedom. It matters if you live near India’s borders and feel threatened by illegal migration or if you are a migrant (or might be mistaken for one). For the bourgeois desi, the idea of being the citizen of a democratic republic has little everyday resonance outside of cricket. Or war.

There was a time at the dawn of republican modernity when being a citizen was marked in a mundane way. After the revolution in France, citoyen and citoyenne were proud honorifics. The transition from being the subject of a king to becoming a rights-bearing citizen of a constituted republic was a thing to be proud of and it was celebrated in everyday forms of address. Moving from the convoluted hierarchies of four estates to the simple equality of ‘Citoyen Jacques’ might have been a small step for un homme but it was a great leap for humanité.

After ‘citizen’ came ‘comrade’ as the terms of one great revolution yielded to the vocabulary of the next. Used first by socialists and social democrats in mid-century Europe, the Russian Revolution exported it to communist movements all over the world, sometimes in translation, sometimes as a variant of the original. In the Chinese Communist Party, members are still encouraged to use it as the standard, respectful form of address within party forums.

Historically, neither ‘citizen’ nor ‘comrade’ made much headway in replacing the standard social forms: Mr/Mrs and their equivalents proved impervious to political correctness. This was partly for aesthetic reasons. There’s a ponderousness to ‘citizen’ and ‘comrade’ that doesn’t sound right; it makes casual conversation sound like declamatory dialogue. Comrade sounds particularly goofy, like a left version of the Lions Club meeting where Lion Chopra networks with Lion Gupta to steal a march on Lion Lokanathan. Besides, the millions of comrades dead in

Stalin’s purges and Mao’s convulsions left people doubtful about the precise nature of this camaraderie.

Still, at least in their conception, citizen and comrade were symptoms of republican modernity, new words for a more equal world. But chowkidar, the civic identity invented by the sangh, is not the citizen as peer, it is the citizen as monitor. A chowkidar is a minder, an enforcer, an agent of the State, also a servant of some more substantial citizen with something to lose. He is a Big Brother apprenticed to a Bigger Brother. This citizen-chowkidar reminds us that the nation state isn’t here to serve us; we are here to serve it. It doesn’t exist to look out for us; we live to keep a look out for it. The chowkidar’s fulfilment lies not in citizenship and civil society, but in in the muscular thrill of being a proxy for the State or the party that runs it.

Thus the gangs of gau rakshaks who attack Muslims and lynch them, the anti-Romeo squad leaders who spend their lives stalking Muslim men with Hindu girlfriends, the love jihad lookouts, the ghar wapsi organizers ushering the errant back into the fold, ABVP’s student snitches carrying tales of treason, these are all exemplary chowkidars. They pore over civil marriage notifications to snout up erring Hindu girls, they rummage through refrigerators looking for meat (and a license to kill), they mind the business of other citizens in the name of a nation that their ideological ancestors had no hand in building. Chowkidars are citizens as cadres.

Their enthusiasm, their rage, their sense of self are bound up with being busybodies. It’s why they sign up to drill every morning, join vigilante militias, perform chest-slicing salutes, and voluntarily disfigure themselves as chowkidars on social media. Theirs isn’t the alertness of the concerned citizen defending civil rights against the encroachment of the State. They don’t want to be vigilant; they want to be vigilantes. Eternal vigilance as the price of liberty? Not likely. Nocturnal violence as a perk of bigotry? Now we’re talking. A stool and a stick and a box to tick: that’s the chowkidar’s civics lesson.

Without a republican vocabulary of their own, chowkidars use liberalism’s words minus their universality. Theirs is the democracy of a khap panchayat, the patriotism of Pragya Thakur, the intellectual breadth of a troll’s timeline, the liberty of rampaging lumpen, the equality of ignorance and the fraternity of fanaticism. No service ranks higher than the violent disciplining of suspect citizens, no solidarity is more exhilarating than the swarming of a mob. If India were a subcontinental holding camp, chowkidars would be its prison trustees. A chowki, it’s worth remembering, is a police post. You should vote for a chowkidar when you want to live in a thana.