Why Mohan Bhagwat is explaining the RSS to the wider world 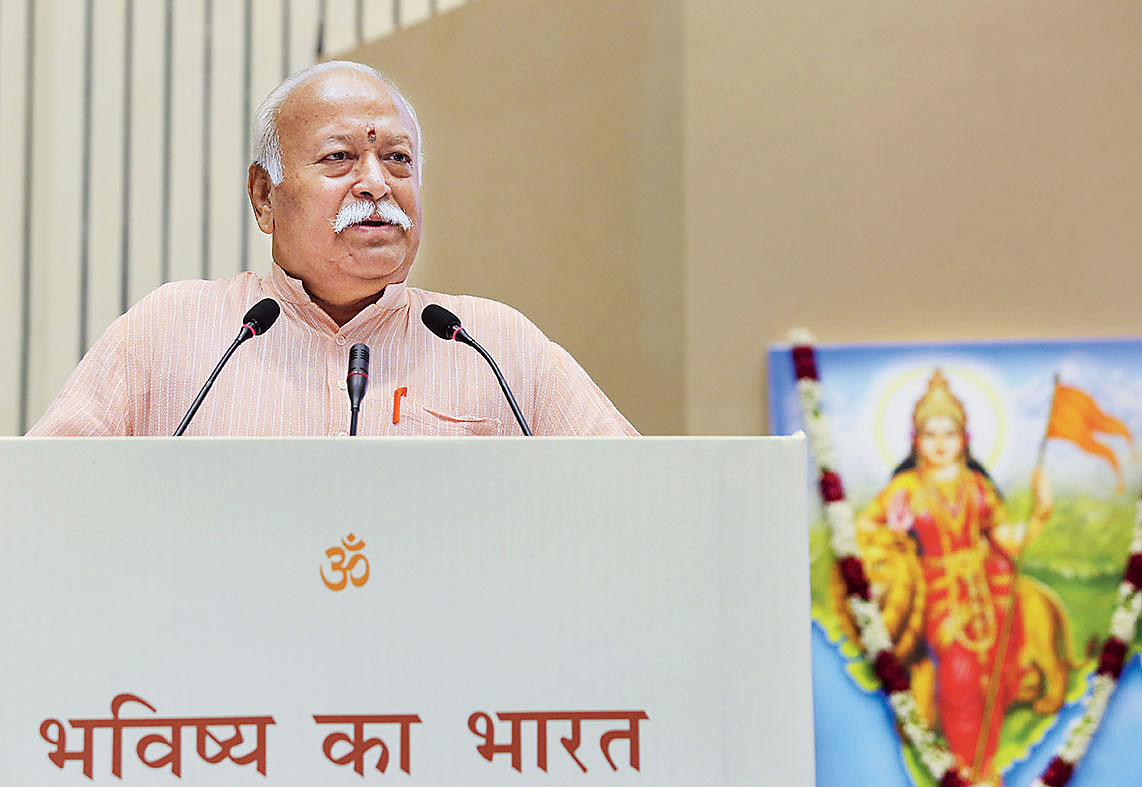 In the age of 24x7 news, the first and instinctive response to any major public initiative follows predictable lines. The supporters give a thumbs-up while those who are sceptics are either cautious or categorically dismissive. So it was with the three-part lecture of the Rashtriya Swayamsevak Sangh’s sarsanghchalak, Mohan Bhagwat. Accompanied by both media hype and a great deal of speculation, the interest has centred on hidden sub-texts, both real or contrived. Why, it was asked, did the head of the RSS feel the need to explain his organisation to a wider world? Was it an exercise born out of defensiveness or an outreach that stemmed from its undeniable importance in a Bharatiya Janata Party-led India? Was the RSS, asked others, reinventing itself, mindful of the criticism that it was nothing but a Hindu version of the Muslim Brotherhood in Egypt?

One of the important things to bear in mind about the RSS — the parent organisation as opposed to its affiliates and fraternal bodies — is that it is a remarkably self-contained body. This is both a source of strength and weakness.

The strength lies in the body being insulated from the vicissitudes of the frenzied news cycle and routine politics. The RSS has an internal drill that often keeps it apart from turbulence in the outside world. There is an RSS calendar, beginning with the annual Vijayadashami speech by the sarsanghchalak, and incorporating various zonal and central meetings, the advanced training camps for swayamsevaks and the guru dakshina day, that preoccupies most of its functionaries throughout the year. Then there are functions, both big and small, involving affiliate organisations ranging from lawyers’ groups to the better-known Akhil Bharatiya Vidyarthi Parishad. RSS office-bearers are constantly on the move — pravas as they call it, traipsing across small towns and spending the night in the spare bedroom of sympathisers or swayamsevaks. It is not for nothing that the self-image of the RSS is that of a parivar. In many ways, particularly given its rapid growth since the 1970s, it is a self-contained world.

Self-sufficiency, however, is a double-edged sword. The fraternity born of attendance in the shakhas and inculcation in the same samskaras (loosely translated as values) has created a nationwide ecosystem that broadly thinks alike. Consequently, there is a temptation to ignore an outside world that often does not share the assumptions which are so ingrained in swayamsevaks. The hostility has grown in magnitude since the BJP acquired political prominence and became a distinct pole of Indian politics after the Ayodhya agitation. The RSS coped with this hostility by looking the other way and focusing on its core work, leaving the BJP to tackle the growing polarisation of politics.

The RSS response to political storms was often curious. I recall the fierce controversy that erupted in 1999 over the murder of the Christian missionary, Graham Staines, and his young son in an inhospitable corner of Odisha. Although the murders were the handiwork of a local Hindu militant outfit — outfits that exist all over the country and which see the RSS as insufficiently committed to the Hindu cause — partisan politics ensured that fingers were pointed at the RSS. It was certainly a time for the RSS to clarify matters. Unfortunately, it was painfully slow in responding. I happened to meet an extremely senior RSS functionary at a function and pressed him on the need for clarifications. “What is the need?” he retorted, “The whole truth is there in the Panchajanya [the RSS’s Hindi weekly].” It never occurred to the very sincere and dedicated RSS functionary that the reach of the organisation’s publications was, at best, modest and insufficient to counter the shrill ‘secular’ tirades in the mainstream media.

Another aspect of this self-sufficiency was a marked anti-intellectualism that, however, has now been discarded. Till the 1990s, the RSS existed in an atmosphere of total intellectual hostility. It was decried as a comic fancy-dress obsession of overweight traders with a penchant for triggering communal riots. It was also thought to be completely lacking in intellectual gravitas, not least because of its perceived abhorrence of the English language — the accepted medium of intellectual discourse. Just as the Left punched above its weight because it had a disproportionate share of articulate English-speaking individuals, the intellectual weight of the entire saffron ecosystem was consistently understated because its preferred language of communication was either Hindi or the other Indian languages. In its time, the larger parivar boasted of individuals such as Raghu Vira, Acharya Devaprasad Ghosh and Vishnukant Shastri. But in ‘respectable’ circles, they were not considered as intellectuals of consequence. The net result of this outpouring of social disdain was that the parivar retreated into itself and developed an inverse snobbery.

An unintended consequence of this retreat was that a key feature of the original RSS philosophy was lost sight of. In his Vigyan Bhavan address this week, Bhagwat repeatedly stressed that the first RSS sarsanghchalak, K.B. Hedgewar, initiated the sangh to unite Hindu society and infuse it with noble individuals imbued with patriotism and wholesome values. Hedgewar, he insisted, never thought of the sangh as a saffron version of the Leninist vanguard. Swayamsevaks were always an essential part of society, being at best moral beacons. Political differences, he said, were a part of democratic life; they shouldn’t divide society.

Bhagwat’s message of swayamsevaks being a part of Hindu society and not merely an elite corps of the chosen ones was as much intended for the parivar as it was for the outside world. The years of isolation and hostility had indeed forced a retreat into the bunker which threatened to derail the larger enterprise. With the acquisition of political power and an expansion into regions that were not traditionally associated with Hindu nationalism, the RSS quite rightly feels that a greater measure of outreach and open-mindedness is imperative if the body is to find greater acceptability in all layers of society. The BJP has very consciously tried to redefine its social gravity and repackage itself as the party of the upwardly mobile, poor and middle castes. Bhagwat has attempted to do the same for the RSS, a reason why the organisation is as much concerned with securing the acceptability of the elites as it is with drawing the socially disadvantaged into shakhas. Of particular significance was Bhagwat’s call to empower women as co-partners in nation-building, remove discriminatory practices and invoke the true matri shakti of India. In effect, Bhagwat has put the issue of Hindu unity right at the centre of the RSS’s agenda.

Finally, Bhagwat’s bid to define Hindutva as encapsulating the essence of India — what could also be called the Bharatiya or Indic traditions — was an implicit but sharp repudiation of the exclusivist Hindutva popularised by Veer Savarkar in an earlier age. Again, this repackaging of an old term, including the endorsement of the national flag, the Constitution (including the term ‘secularism’ incorporated in the Preamble in 1976) and social reform — themes used by critics to beat the RSS with — was blended with the three unexceptionable attributes of robust citizenship: patriotism, reverence for ancestors and the past, and cultural pride. Bhagwat was also explicit that any Hindutva that disavowed Muslim citizens on grounds of faith was not a true Hindutva, which had an underpinning of universal brotherhood. It certainly went against the constitutional invocation of fraternity — an ideal he lauded.

Bhagwat’s Vigyan Bhavan speech was a bold intervention that frontally addressed the criticism of the RSS as narrow-minded and its version of Hindutva as doctrinaire and sectarian. It marks an important step in the journey of the RSS from the fringes to mainstream Indian nationalism.