Advertisement
Home / Opinion / Celebrate the Nobel, not the attire

Celebrate the Nobel, not the attire 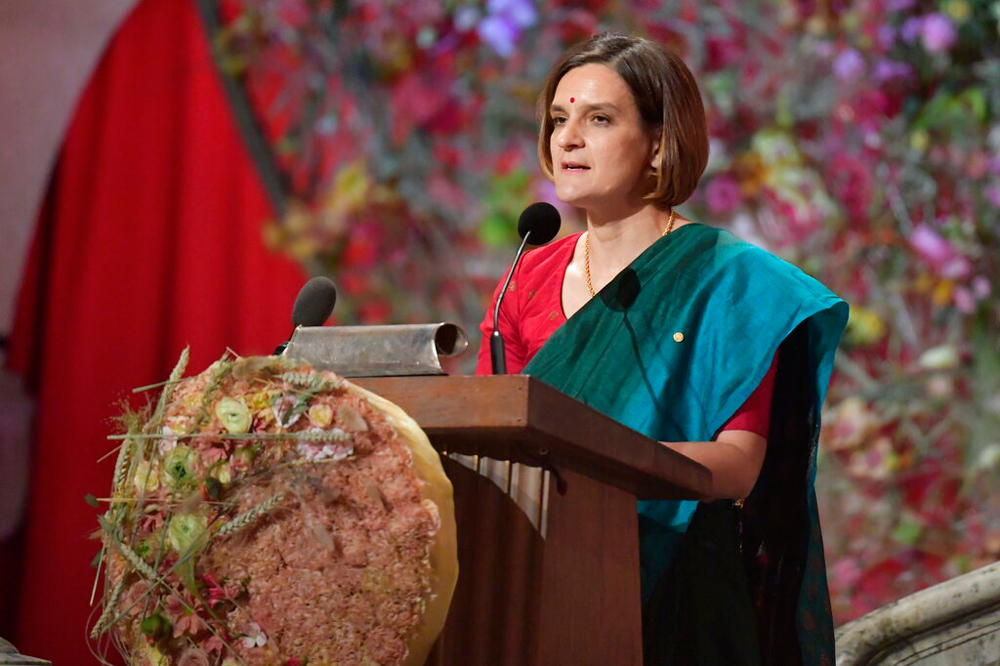 Economist Esther Duflo gives her speech during the Nobel banquet at Stockholm City Hall on December 10. We should celebrate her work and reflect upon what it reveals about our economy
(AP photo)
The Telegraph   |   Published 17.12.19, 07:13 PM

Sir — Many Indians are celebrating the fact that Esther Duflo and Abhijit Banerjee attended the Nobel Prize ceremony in traditional Indian attire. But such jubilation, especially when it comes to Duflo’s choice of clothing, is meaningless. The economist could have chosen her apparel based on a number of reasons, not the least of which could be that her Nobel-winning work is based on the Indian context. Interpreting this as a triumph of our culture is just a symptom of the growing preoccupation with ‘national supremacy’. Instead of harping on misguided connections, we should celebrate Duflo’s work and reflect upon what it reveals about our economy.

Sir — Now that the citizenship (amendment) bill has been passed by both Houses of Parliament, India has a new citizenship law in place. The right-wing brigade might have declared the occasion of the bill’s passage a gold-lettered day, but in reality it was a dark day for the nation. The new law marks a retreat from the notion of religious plurality that India has cherished for ages. The law has disappointed citizens who believed that India could remain secular even after the Bharatiya Janata Party assumed power at the Centre. India now has the dubious distinction of being a country with a secular Constitution but with laws that abet religious discrimination.

The new citizenship law brings about a fundamental change in India’s inclusive image. No amount of rationalization by pro-BJP legal luminaries and television anchors can justify this religious discrimination: it is a blotch on the Indian democracy that this law bars only Muslims from seeking refuge in India. A landscape dotted with ‘detention camps’ for the members of a particular religious community will only show that the world’s largest democracy espouses religious intolerance.

Secularism is the talisman that keeps the nation together. Hindutva, stained with upper-caste supremacy, cannot substitute secularism in maintaining national unity. Allowing citizenship based on domicile on the Indian soil is the only way forward. One hopes that the Supreme Court will rule the new law unconstitutional, declaring it null and void.

Sir — The Citizenship (Amendment) Act has begun spreading its venom among the people. It has not only ignited hatred against Muslims but also led to outbursts of anger in several parts of the country. Following the Partition, India witnessed a number of conflicts and riots before a semblance of peace was established. This calm persisted for a number of years. Although illegal immigration has always been a problem in the country, there had been an appreciable equipoise. But the BJP was clearly not fond of this state of balance. It therefore threatened parts of the population with expulsion from their motherland.

The BJP seems to have deviated from its earlier agenda. It had previously claimed that it would throw out all illegal immigrants and, to this end, it introduced the National Register of Citizens in Assam. Now, with the CAA, the party has made it clear that migrants from Bangladesh, Pakistan and Afghanistan, from all religions but Islam, will be granted Indian citizenship. This means that the problem of infiltration will remain, as illegal immigrants from non-Islamic lineages will now be given the legal licence to enter India. Then, the main goal of the CAA and the NRC is only to foment religious polarization. This is clearly a rerun of the ‘divide-and-rule’ policy, and part of the BJP’s political game plan.

Sir — The CAA, which deprives Muslims of the right to seek citizenship, is discriminatory. It violates the right to equality under Article 14 of the Constitution. By prioritizing the enactment of laws like the NRC and the CAA, the BJP is trying to divert attention from other important issues by harping on illegal migration. Real problems faced by the people include the country reaching its highest level of unemployment in 45 years, the skyrocketing price of onions and the decelerating growth rate. These seem to be matters that the Narendra Modi-Amit Shah government cannot handle. If enough tension is created with the CAA and the NRC, it will keep the Opposition and the people so focused on identity issues that the hunger of the poor and the despair over joblessness will be shelved for now.

Sir — It is surprising that many people of the Hindu community seem to be happy about the CAA. This is in spite of the fact that they — those who have so far comprised the electorate — are being burdened with proving their citizenship. Upon failing to do this, they, too, might be considered illegal immigrants and detained. Further, if proper procedure is followed, even non-Islamic refugees from Pakistan, Bangladesh and Afghanistan, who have been promised legal entry to India, may find it difficult to submit evidence of their ‘persecution’, which is the stipulation for gaining citizenship under the CAA.