No point in iron fence, posting guards would have been better 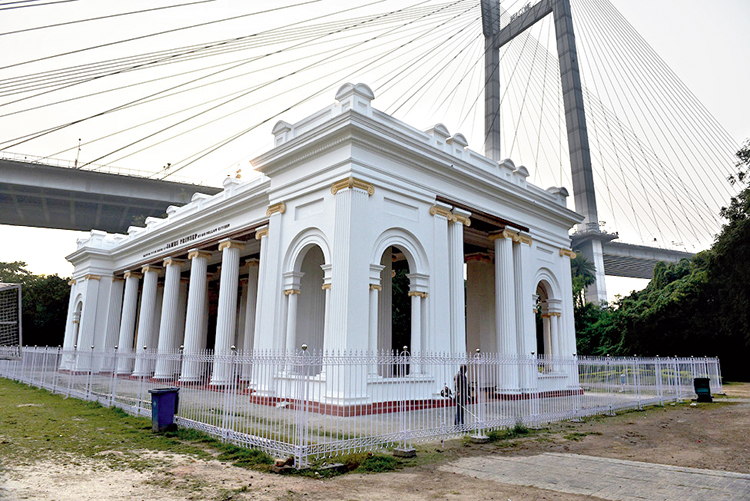 Sir — It is unfortunate that an iron fence had to be constructed around the Prinsep Ghat monument in order to prevent visitors from defacing it (“Do we really need the fence?”, Dec 6). One wonders how citizens can fail to respect monuments that are markers of the history of their own city. However, would not careful vigil by guards have been a better way to ward off miscreants instead of rendering the monument out of bounds for all? The government could also consider conducting special educational tours for residents of the city in order to enlighten them about the significance of the monument.

Sir — Following the economic liberalization of India, there has been an increasing trend of celebrating occasions like birthdays with great pomp among the middle classes. It has become common to rent places in local community halls, restaurants as well as hotels for festivities. The decoration, food and the deluge of guests have come to rival those at wedding ceremonies. However, it is also a fact that in the same country there live children who do not even know what a ‘birthday’ is, |let alone celebrating it or tasting a birthday cake.

The news report, “What’s a birthday? A school teaches” (Dec 2), is heart-rending and heartening at the same time. When the teachers and the headmaster of Dubrakone primary school in Onda, Bankura came to know that most of the students of the school do not know what the meaning of the word, birthday, is — owing primarily to the fact that they come from underprivileged families — they decided to celebrate the birthdays of each and every student of the school on a monthly basis. It is laudable that the teachers not only bear the cost of the celebrations but also invite the parents of the children whose birthdays are being celebrated that month to partake in the festivity.

It seems somehow significant that the whole conversation about birthdays began with a discussion about Christmas, the birthday of Jesus Christ. The response |of the teachers comes across as a kind of Christmas lesson that the true spirit of any festive occasion is fulfilled only when members of civil society, irrespective of class or |religion, are involved. In a country mired in communal divides, assaults on the freedom of speech and political mudslinging, this positive step by the teachers is a ray of hope that not all people have stopped believing in kindness.

Sir — The students of Dubrakone primary school are so poor that they do not even know what a birthday is, let alone the privilege of its celebration. So the teachers decided to jointly celebrate the birthdays of the students born in a particular month at the end of it. In addition to the customary cakes and candles, the guardians, along with the children, were treated to a sumptuous meal. The total cost is borne solely by the teachers. This is a magnificent gesture. It proves that teachers are quite like parents when it comes to loving children. This could also be emulated in schools where the dropout rates are especially high.

Sir — It was saddening to learn that at the close of the second decade of the 21st |century, there are great numbers of children in the state who have no idea what a birthday is. As such, it is a noble endeavour on the part of the teachers of Dubrakone primary school to finance and celebrate the birthdays of all their students, along with their parents who can hardly afford the luxury of such celebrations. It is also unfortunate that Sajal Mardunnya, the student whose question about the meaning of a birthday opened the eyes of the teachers to the crisis, passed out of primary school before the new tradition of celebrating birthdays was set rolling.

Sir — Lionel Messi, the ace Argentinian forward, must be congratulated for winning the Ballon d’Or award for a record-breaking sixth time. He has achieved tremendous success for the Spanish football club, Barcelona, with 428 La Liga goals and 10 La Liga titles. In fact, it was a treat to watch him play alongside Neymar Jr and Luis Suárez. It is unfortunate that Messi failed to win the coveted Copa América and World Cup for his country. One hopes that he plays the 2022 Fifa World Cup in Qatar — possibly his last shot at winning the trophy — and achieves the feat.