Water as political capital in Bihar 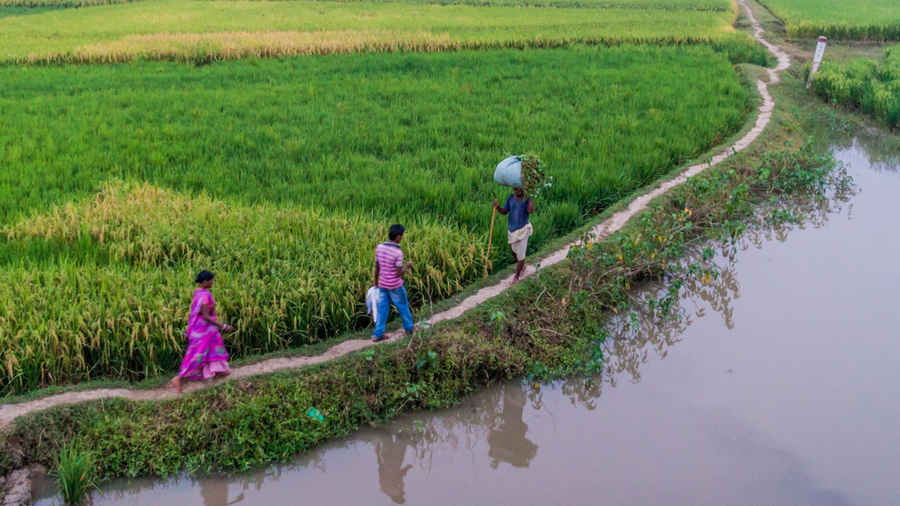 Massive changes have altered the natural distribution of water and silt, leading to land degradation and water scarcity in Bihar.
Shutterstock
Somnath Bandyopadhyay   |     |   Published 04.08.20, 01:58 AM

Bihar goes to the hustings in a few months. The primary issue seems to be rural livelihoods. This is a significant achievement for Nitish Kumar. Although law and order, public infrastructure and social harmony remain far from satisfactory in one of the most backward states of the country, enough has been done over the past 15 years to push these issues lower down in the pecking order of political priorities.

The Bihar of 2020 is aspirational. Patna’s ubiquitous coaching centres are now reaching out to the masses, challenging the hegemony of those in Kota or Delhi where batches of Bihari youth used to migrate. Migration is now a planned career move, worthy of preparation through a structured investment of time and resources. But the soft underbelly of this strategic migration was exposed recently in the wake of Covid-19 when an estimated 25-30 lakh people decided to return to the state from all over India.

While we debate the fallout of reverse migration on the national economy, the home states of labourers are developing their own strategies. Jharkhand and Chhattisgarh are ramping up government programmes; Uttar Pradesh is taking steps to leverage its existing infrastructure to create special economic zones conducive for manufacturing. Units planning to exit China are being wooed aggressively. Bihar, unfortunately, is not there yet. Most of its manufacturing hubs went to Jharkhand two decades ago, leaving it disproportionately dependent on the farm sector. Yet, unlike Punjab, it lacks both a robust irrigation infrastructure as well as an entrepreneurial farming community. Of course, there are exceptions such as the Sone command area or the Kurmis and Koeris, but they are notable exceptions.

Bihar did not have to follow the Punjab model of irrigation infrastructure. It had traditional systems of harnessing floodwaters channelized through a landscape mosaic of ponds, wetlands and old channels. The agrarian prosperity of Bihar, most evident during the early years of the colonial rule, stemmed from a unique ecosystem that provided nourishment in the form of silt and water as well as protection from floods or droughts.

Bihar has one of the largest rural population densities. A majority of this rural populace is dependent on farming and allied sectors for their livelihood. It is this sector that people abandon in order to seek alternative livelihoods in other states or abroad. And it is this sector that is likely to vote for the most attractive policies. But policy options are limited. Bihar was the first to repeal the Agricultural Produce Market Committee Act in 2006. This should have ended the monopoly of the regulated mandis. Roads and electricity have penetrated the remotest villages, removing one of the biggest constraints to production and supply. Yet, the agriculture market is far from competitive and farm productivity remains one of the lowest in India. The recent repeal of the Essential Commodities Act and other major legislative changes aimed at liberalizing the farm sector might help, but that is still some years away.

In order to cope with the sudden return of migrant labourers, Bihar has decided to conduct skill-mapping, an exercise intended to promote a labour and service market in the rural farm/non-farm sectors. The farm sector, meanwhile, has learnt to reduce its dependence on labour in favour of mechanization, and the non-farm sector seems to be already crowded. Clearly, manufacturing is the only sustainable solution for expanding job opportunities and raising incomes. But this requires investments and a vastly different investment climate.

The best interim solution, thus, is to focus on farm productivity and immediate value-addition through agro-based industries. A host of farm inputs such as seeds, fertilizers and pesticides are already subsidized. Electricity is cheap and, in places, free. Farmers have access to machines, financial support and knowledge through community and government programmes. But deeper problems such as fragmented landholding, preference for share-cropping, and general disinterest among farmers require systemic and cultural transitions.

There is another cause of agricultural stagnation and decay in Bihar. Massive changes have altered the natural distribution of water and silt, leading to land degradation and water scarcity. Irrigation determines the crop type, cropping intensity and productivity. The availability of electricity gave farmers greater access to underground water. But underground water sources are neither unlimited nor cheap. It must be understood that the upper aquifers are supplying water that they derive from surface sources, utilization of which might lead to the rapid drying up of wetlands and other water bodies while meeting only a fraction of the overall demand. Irrigation, thus, is mainly dependent on the lower aquifers that derive water from distant watersheds. Access to this water requires more energy. This is where cheap electricity helps. But even deeper aquifers have their limits, and far too many deep bore wells are being dug in dry or semi-dry zones. For every functional deep tube well in a village in south Bihar, there are three dysfunctional ones that quadruple the cost. One option is to subsidize these costs; but this incentivizes failure. A more pragmatic approach is to encourage community-level ‘water banks’, using aquifer storage and recovery techniques.

We are becoming aware of the poor state of land and water, their interactions at the landscape level that provide natural services like irrigation, aquifer recharge and flood protection, and how some of our interventions have destroyed these ecosystems. Still, recent efforts by Telangana, Maharashtra and Madhya Pradesh have shown how steps can be taken to restore some of these functions through peoples’ programmes.

Creating underground ‘water banks’ will not only secure irrigation and raise farm incomes but also help create a green infrastructure, restore ecosystems and expand job opportunities in rural Bihar. Who knows, it might also determine the next government in Bihar.