The balance of power within the Congress has shifted 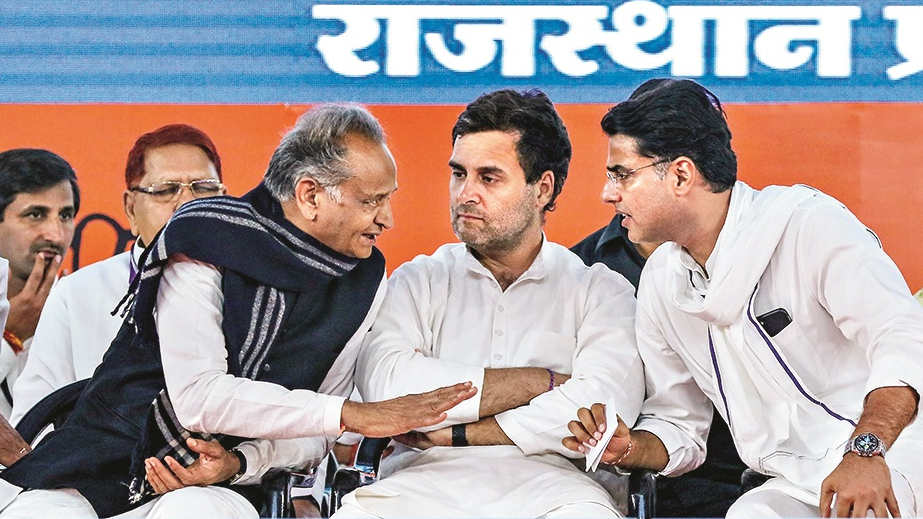 It is entirely possible that had the Bharatiya Janata Party not succeeded in toppling the Kamal Nath-led Congress government in Madhya Pradesh in the week prior to the Covid-19 lockdown in March, the Ashok Gehlot government in Rajasthan would either have collapsed or been on the brink of collapse. The BJP’s success in Madhya Pradesh owed almost entirely to its ability to exploit the internal strains within the Congress and draw the group led by Jyotiraditya Scindia to its fold. A similar exercise was contemplated in Rajasthan, thanks to the rift between the chief minister, Ashok Gehlot, and his erstwhile deputy chief minister and Pradesh Congress chief, Sachin Pilot. However, having learnt a lesson or two from its experiences in Bhopal, not to mention Imphal and Panaji, the Congress High Command left the crisis management to the experienced old guard. Consequently, using all the political and state resources at his command, Gehlot mounted a ruthless, no-holds-barred operation that left his rival cornered. Barring a last-minute reversal, it is likely that the chief minister will win the vote of confidence in the state assembly. For the moment, the Congress government in Rajasthan seems safe.

The implications of Gehlot’s success in thwarting the challenge of his much younger rival in state politics have shaken the Congress ecosystem. In the aftermath of the Congress’s first defeat at the hands of Narendra Modi in 2014, there was a belief that a generational change in the party was overdue. It was felt that the BJP had succeeded in securing a disproportionate share of the votes of the under-35s owing to Modi’s connect with the aspirational urges of the young. To counter this, many Congress strategists argued that there was no alternative to projecting Rahul Gandhi and his team of young inheritors. They would, the argument went, present a more vibrant and wholesome face of the Congress and eclipse the old guard who had come to be associated with corruption and inefficient statism.

To be fair, the Congress did respond to these impulses, albeit patchily. Rahul Gandhi was elevated to the top of the pile and, although the old guard wasn’t marginalized, their strategic importance diminished. It was in this context that Pilot, who had cut his teeth as an energetic and bright minister of state in the Manmohan Singh government, was despatched to Rajasthan to revive the fortunes of a state party that had been decimated in the assembly election of 2013 and the parliamentary election next year. On his part, Pilot did what few expected entitled inheritors to do: he totally gave up Lutyens’ Delhi and immersed himself in the thankless task of rebuilding the Congress at the grassroots. Unlike Rahul Gandhi whose political application was ephemeral and laced with a very Western sense of fiercely guarding his own private space, Pilot became, in every sense, a 24x7 politician. This fetched dividends in 2018 when, despite an energetic bout of campaigning by the prime minister, the Congress coasted to a narrow victory. Predictably, having worked tirelessly for five years, he expected the political dividends.

Unfortunately for him, the makeover in the Congress was patchy. The Congress may claim to be an ideological party, committed to a loose secular and welfarist ethos. In reality it was a machine dependant on networked individuals and community stalwarts. Patronage has always played a major role in binding the Congress together and in the districts the party was always a coalition of factions which would, depending on the circumstances, either act in tandem or be at each other’s throats. In being able to juggle these disparate elements, Pilot wasn’t bad but Gehlot, blessed with greater experience and an established network built over decades, was better. Moreover, as often happens in Indian politics, the young are always expected to defer to seniority — something Pilot didn’t quite manage.

The relationship between Gehlot and Pilot was marked by mutual contempt. Gehlot saw Pilot as an interloper who had climbed up the ladder too fast because of his inheritance, his social graces and his easy access to the Gandhi family with whom he could converse in a language they understood easily. Pilot, on his part, probably viewed Gehlot as a fuddy-duddy, a politician of an earlier age, who combined slipperiness with ruthlessness and who, to cap it all, had a monumental chip on his shoulder. It was both a generational divide and a class war.

The Gehlot-Pilot clash was in many ways a repeat of the schism that separated the ‘people like us’ around Rajiv Gandhi from the old school politicians that defined the Congress in the states and districts. On assuming power after Indira Gandhi’s assassination, Rajiv, too, had hoped to remake the Congress in his own image. He didn’t succeed, not least because the social base of those around him was too narrow and too Delhi-centric. India of the 1980s wasn’t quite prepared to accept the dominance of what Arun Singh famously described as the “Beatles generation” — at least not yet and certainly not in politics. By the time he went into the 1989 election — which he lost — the more traditional politicians had reasserted their hold on the Congress.

In many ways, this is what seems to be happening to today’s Congress where Sonia Gandhi plays Regent while Rahul Gandhi isn’t quite ready and willing to become the full owner of the family estates. The devastating defeat in the 2019 general election was a watershed. This was an election the Congress didn’t expect to win outright — the limited geographical spread of the party ruled it out. But this was a battle the Congress ecosystem genuinely believed that Modi would lose, paving the way for a Congress-led coalition and a renewed opportunity to claw its way back as an all-India party of consequence. Whether the defeat owed as much to Modi’s enduring appeal as Rahul’s lack of popular connect will no doubt be endlessly debated. But it was the Gandhi scion’s petulant reaction to the outcome, his persisting indecisiveness over whether or not to lead the dynastic party and the failure of Priyanka Gandhi to make up the charisma deficit that has left the party gasping. In terms of its national approach, the Congress appears to have become the hunting ground of an orphaned Left and others who want it to appear as an Indian version of an increasingly Woke-inclined Democratic Party in the United States of America.

However, while there is considerable disorientation at the central level, the Congress is gradually being re-forged in the states. The loosening of the party’s central authority has meant the emergence of a Congress confederation — the state units having equal weight as the centre. Whether it is Captain Amarinder Singh in Punjab or Gehlot in Rajasthan, the command and control of the party has moved away from the High Command. The underlying rationale is that in a growing number of states the belief is widespread that the party cannot secure incremental votes on the basis of its national appeal because its national leadership doesn’t inspire confidence. It is worth noting that since 2014, the Congress has been performing better in the assembly elections than in parliamentary polls. This was certainly the case in Karnataka, Gujarat, Rajasthan, Chhattisgarh, Madhya Pradesh and Maharashtra.

After the decimation of Pilot — who may have to seriously consider his future outside the Congress — the balance in the Congress has shifted decisively in favour of strong state leaders. The term, ‘satraps’, to describe the Congress leadership in the states may no longer hold. The incoherence between a relatively strong Congress in the states and a weak party at the Centre is becoming obvious.