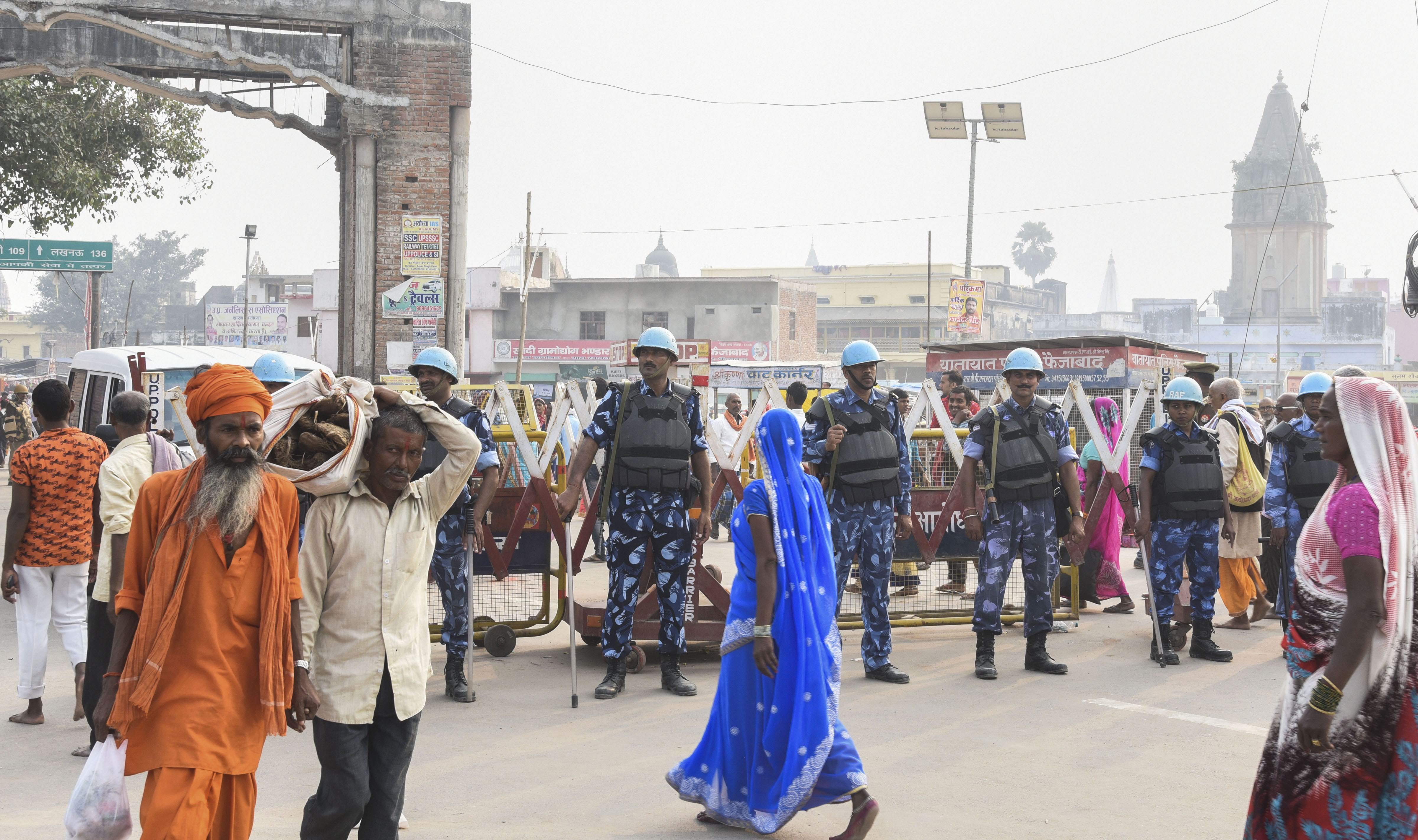 Police personnel stand guard at Naya Ghat in Ayodhya on November 7. The Centre dispatched 4,000 paramilitary personnel to Uttar Pradesh ahead of verdict on the Ayodhya land case.
PTI
The Editorial Board   |   Published 09.11.19, 04:52 PM

Balance is integral to the idea of justice. The Supreme Court believes that it has been able to strike a balance in its verdict on the Ramjanmabhoomi-Babri Masjid case, a legal dispute that had continued to fester for decades. In a unanimous judgment passed by a five-member Constitution bench that dismissed Allahabad High Court’s earlier decree apportioning the contested site among three claimants, the Supreme Court has ordered that the disputed strip of land — it measures 2.77 acres — should be handed over in its entirety for the construction of a Ram temple.

The Centre has been directed by the court to constitute a board of trustees within three months for this purpose. The Centre has also been instructed to allot land for the construction of a mosque — the Babri Masjid was demolished by an unprovoked, allegedly orchestrated, assault by kar sevaks — at a ‘prominent’, but alternative, site.

The apex court has held this wanton act of destruction and the earlier desecration of the mosque to be an infringement of the law. It is to be hoped that the investigation and the preparation of the charge sheet against the offenders — the Central Bureau of Investigation had been asked by the Supreme Court to complete the hearings without intervals in the sessions court way back in 2017 — would be expedited. A further delay in justice in this case could seriously undermine the claim of the arbitration being fair. Balance, after all, is also predicated on the swiftness of the edifice of justice.

The Ayodhya case and, arguably, the verdict exhibit certain singular features. A tiny patch of land in the course of its contentious history inflicted serious damage to the inclusive fabric of the country. Much of the credit for this dubious accomplishment must go to the majoritarian political project that had chosen to ride piggyback on the Ayodhya movement that inflamed public sentiments. Yet, at its heart, Ayodhya represented a title deed dispute. Religious sentiments or, for that matter, frenzy should have had no place in it. The Constitution bench ostensibly made this very point when the Chief Justice of India stated that a land title should remain immune from faith and prioritize proof. The court — it acknowledged the faith of Hindus in Ram — agreed with the archaeological evidence that the mosque had not been built on vacant land. Significantly, the findings of the Archaeological Survey of India do not expressly state that a Hindu structure had been razed to build the mosque.

The Supreme Court’s pronouncement, it is being hoped, would bring a sense of closure. But this can only be possible if sympathizers of the Hindutva fraternity choose to act responsibly. The judgment — a review had been considered initially — should not be used as a licence for further polarization or violence. The prime minister’s appeal to view the verdict beyond the prisms of loss or win needs to be honoured.