The significance of the bhoomi pujan is being understated 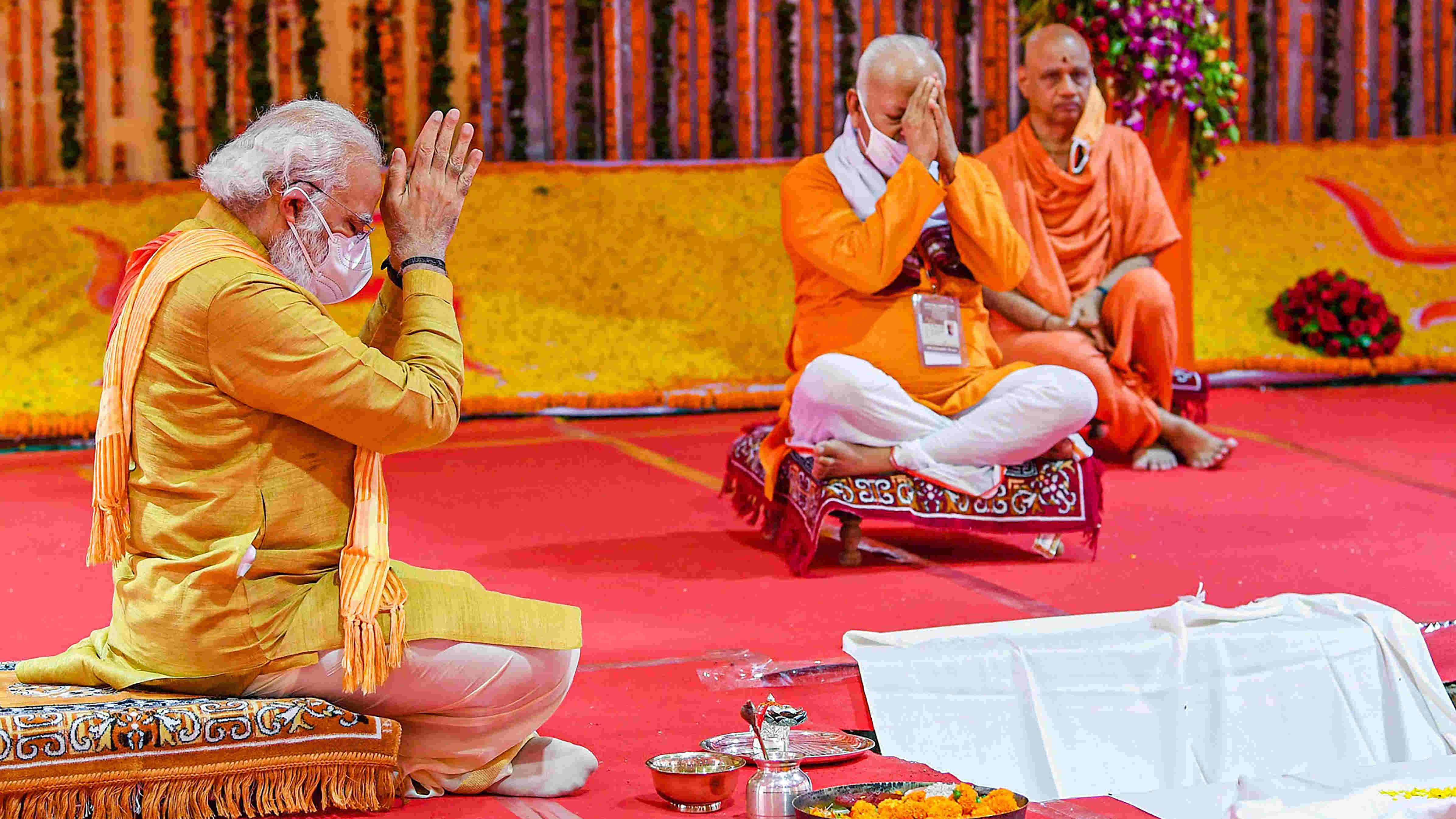 One of my earliest memories of the Ram Janmabhoomi movement dates back to a few months before the general election of 1989 that led to the defeat of Rajiv Gandhi. In the months preceding the election, Vishwanath Pratap Singh had emerged as the symbol of the fight against corruption, symbolized by the commissions paid to middlemen involved in India’s purchase of artillery guns from a Swedish armaments company. At the centre of the election calculations of the non-Congress parties was the question of Opposition unity. It was conventional wisdom at the time that if the Opposition parties could put aside their other differences and proffer a single candidate against the Congress in the constituencies, Rajiv Gandhi would find it extremely difficult to repeat his resounding victory in 1984. The atmosphere of Lutyens’ Delhi resonated with intrigue and half-baked information.

Among the many obstacles to Opposition unity was the issue of the Bharatiya Janata Party’s participation in the project. The issue was much more than the secular-communal schism that was a contributory factor in the break-up of the Janata Party in 1979. In June 1989, at its national executive meeting in Palampur (Himachal Pradesh), the BJP had taken the momentous decision to formally endorse the Vishwa Hindu Parishad’s movement for building a Ram temple on the site of a 16th century Mughal shrine — the Babri Masjid — in Ayodhya. More to the point, the VHP, with the participation of local BJP units, had launched a programme to despatch consecrated bricks to Ayodhya for the proposed temple. There were reports from all over India, and even overseas, of Ramshila pujas in villages and towns. In some places, the occasion had also triggered Hindu-Muslim clashes. Consequently, there was intense pressure on the newly formed Janata Dal to keep its distance from the BJP to avoid the loss of Muslim support. To complicate matters further, there were reports of the Congress playing footsie with the VHP over a proposed shilanyas of the temple.

It was at this juncture that V.P. Singh made it clear to the BJP that there could be no question of any electoral understanding unless it distanced itself from the VHP. The BJP’s response to this threat took everyone by surprise. Within two days, the party president, L.K. Advani, arrived at a temple behind Delhi’s Khan Market and undertook a shila puja. The message was clear: on the question of the Ram temple, the BJP would not yield.

In the end, the general election was fought with the Janata Dal and the BJP avoiding triangular contests in most of northern, central and western India — an arrangement that contributed immeasurably to the Congress losing its majority in the Lok Sabha and V.P. Singh becoming prime minister. The BJP’s tally rose from 2 to 85.

As a supporting party, the BJP continued to put pressure on the Janata Dal-led government to facilitate temple construction. While V.P. Singh kept up the pretence of negotiations, Muslim pressure resulted in at least two Janata Dal chief ministers — Mulayam Singh Yadav in Uttar Pradesh and Lalu Prasad in Bihar — mounting countervailing pressure to stand firm and not yield ground to the Ram bhakts. This was the period that saw Ayodhya occupy the centre-stage of a furious debate all over the country that drew the middle classes into the battle. It created the perfect setting for Advani to warn of the “greatest mass movement” in India and announce an innovative plan to undertake a rath yatra from the Somnath temple in Gujarat to Ayodhya where the kar seva for the temple would start.

It is sometimes difficult for those who didn’t experience the events from mid-1990 to the end of 1993 to gauge the headiness, emotional turbulence and even the violence that marked the transformation of the Ayodhya movement into a defining, inflection point in India’s recent history. There were times it seemed that India would be engulfed by a civil war and even by a mass uprising that would transform the fundamental character of the Republic. Future historians who care to look beyond the accounts in newspapers published from urban centres will be struck by the parallel, subterranean narrative centred on folk songs that were widely distributed in the form of cassettes and pravachans in hugely-attended village sabhas by itinerant sadhus and sadhvis where the theme of honouring Lord Ram at the very place he was born would resonate.

The emotional fervour of the mobilization was seriously underestimated by the metropolitan elite that still clung on to its faith in what can loosely be called the Nehruvian consensus. A large section of this elite pinned their hopes on the Congress returning to power and restoring stability. On its part, the fractured remnants of the Janata Dal, with the encouragement of Left intellectuals, entertained the belief that the parallel furore over reservations for other backward classes would witness an intra-Hindu clash between Mandal and kamandal and undermine the Ayodhya movement’s claims of Hindu unity.

Some of these calculations were overturned by the tragic assassination of Rajiv Gandhi in the middle of the election campaign. It is impossible to accurately gauge the impact of the resulting sympathy vote for the Congress. My own estimates are that had it not been for the assassination, the results would have broadly replicated the outcome of the 1996 general election. However, despite the post-assassination recovery of Congress fortunes, especially in Maharashtra, neither sympathy nor Mandal was able to prevent an outright BJP victory in the Uttar Pradesh assembly. It was the control of the state government in Lucknow that set the stage for the kar seva of December 6, 1992, that culminated in the total demolition of the Babri shrine.

Those witnessing the telecast of the bhoomi pujan for the Supreme Court-approved Ram temple may be struck by the fact that the undeniable religiosity of the Ram bhakts isn’t matched by a corresponding sense of militancy, the likes of which were witnessed in the kar seva of October 1990 and December 1992. The subsuming of raw passion and anger by pageantry — the bhoomi pujan will, in effect, be a victory celebration — didn’t happen merely because the final victory was a negotiated settlement within the parameters of the Constitution. It was the culmination of a post-1994 strategic shift.

After the demolition of the disputed shrine in 1992, the entire Establishment of India, including the judiciary, trained its guns on the BJP and the wider sangh parivar. Although the ban on the Rashtriya Swayamsevak Sangh couldn’t stand judicial scrutiny, there was a definite feeling within the saffron leadership that the Ayodhya movement was in danger of spinning out of control and being taken over by the extremists. With political power at the Centre and the states now a real possibility and the Congress no longer in a hegemonic position, a calculated decision appears to have been taken to lower the temperature of Hindu disquiet and direct it towards the quest for political power. The process was uneven and even met with some resistance within the larger parivar but the change was discernible when the focus of the Ayodhya movement shifted from mass mobilization to securing either a negotiated settlement or a judicial victory. The attempts at a negotiated settlement with Muslim bodies were always difficult and ended abruptly after the BJP was voted out of power in 2004. Thereafter, the real challenge was to get the Supreme Court to hear the case with a sense of urgency and deliver its judgment.

Wednesday afternoon’s bhoomi pujan marks a huge Hindu victory whose larger significance is being understated. Perhaps the full realization will unfold when the actual temple is finally inaugurated.