An engine of cowardice 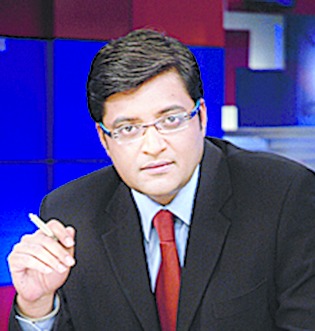 Let me explain Arnab Goswami to you. Or, rather, since I'm not Arnab Goswami, please allow me to place before you how I see Arnab Goswami of Times Now TV. Actually, first let me explain why any time at all should be spent on someone like Goswami. If, like me, you accept that India is exceptional among our immediate neighbours, that despite its many ongoing tragedies it's a better country to live in than, say, Pakistan or Myanmar, then you also have to say why this is so. In this, I would list our Constitution, which guarantees secularism and free speech at its core, as the first crucial thing that differentiates us from our neighbours. Preceding the Constitution, but bolstered and protected by it, is a tradition of a free press that is unique in South Asia. This press may fluctuate from time to time between being more or less free, being pushed around by the governments or large bits of it bought out by business interests, but the tradition the best practitioners of Indian journalism uphold is one of loudly and clearly saying uncomfortable and even unsayable things to the people in power. Now, it's one thing for a minister to demand the gagging of the press, one thing if some oligarchic business house tries to squash a book, but it's quite another if a prominent news anchor demands the arrest of fellow journalists on the grounds that they are 'anti-national'. This is what Arnab Goswami is doing right now, and it constitutes the worst, slimy, jingoistic, profit-seeking attack on democracy, the free press, the Indian Constitution and, therefore, on the Indian Republic itself.

Wherefore the questions come up: who is this rich and powerful traitor in our midst? And how are we to understand him and his motives?

Most of us have suffered school bullies. The bully is that boy, perhaps physically a bit bigger than others, who uses all means at his command to control smaller students and push them around. If he can, the bully will beat you up when the teachers aren't looking; if he needs to, the bully will start a campaign against some other kid, to cow him down and make him miserable; when faced with authority the bully will not hesitate to use outright lies; if the bully is met with physical resistance, paid back in his own coin, so to speak, he will also not hesitate to run to the teachers and tearfully complain that he has been beaten up, no matter that it was he who started the fight. There may be some differences in the modus operandi but this kind of bully is to be found among both girls and boys.

The bully may not necessarily have physical heft but, invariably, she or he will have the will and stamina to cause unprovoked harm, and invariably he or she will follow only one mantra: me, myself and I above everyone else - me always - right or wrong, I must be the one who prevails - by whatever means, fair or foul.

Sometimes these bullies grow up and modulate their characters, but all too often they carry this bullying nature into adulthood, assuming it will continue to reward them with power and success. Far too often, they are not disappointed. These bullies appear in society, in every walk of life.

Upon the evidence of his TV show, Arnab Goswami is a classic example of just such a bully. In fact, the next time you watch his show, try doing a mental exercise: take this man out of his suit and put him in various different costumes and situations - the local boys' club secretary who leads the gang aggressively demanding puja contributions, the one standing behind a gang of thugs who eggs them to get violent in any altercation, the cop who beats up a defenceless riksha-walla or a thela-walla, the Chief Minister's or the Prime Minister's political Rottweiler, who does the savaging on behalf of his fakely dignified master, the corrupt magistrate who thunders down a sentence on the victims of a crime while letting free the perpetrators, the semi-suave high society gentleman who turns ugly at the drop of a hat, the rich man in an SUV who hits an auto-riksha and then gets out and beats up the auto-walla, claiming damage to his fancy car. See if you can recognize Arnab Goswami in these men and vice versa. In case you feel this is an ad hominem attack, that this is a personal takedown of the man rather than the issue, I would simply point out that the public persona Goswami has assiduously created for himself, his self-righteousness, his loud, spitting, hectoring style on national television, is at the core of the issue. It doesn't matter what 'politics' Goswami espouses; the issue would be the same - and his behaviour equally odious - if he was a Stalinist bully, say nominally of the 'Left', demanding a lynch mob to string up people he deemed 'counter-revolutionaries'.

As with all bullies, what drives Goswami is an engine of huge cowardice. This is plainly in evidence in the way the man conducts his TV show. The first fear (and one with which he has sadly infected several competitors) is of losing TRPs. Goswami and Times Now have to know what they are doing is poisonous for the intellectual environment of the country they claim to love so much; yet they are bound to ride the monster they have created, they cannot afford to change tack even in the face of proof that they have been caught out as liars, as news fabricators, and for providing provocation for the worst tendencies in a fast-changing, young society. The construction of the monster goes like this: 1. find a news item or an issue that can magnet high emotion from the viewer, 2. define the headline in the most dishonest and dumbed-down terms, 3. pass a verdict on it even before a word has been spoken in the 'debate', 4. find scapegoats on the wrong side of the 'verdict' and bash the living daylights out of them, giving the viewer the satisfaction of having participated in a virtual blood sport.

In this, the enemies of the profit-project are people who articulately challenge Goswami's pre-trial verdict and, equally bad, the ones who try and bring some complexity and nuance into a discussion. So, Goswami's cowardice is in evidence from the very start of his show - if you're against what he is proclaiming that evening, He. Will. Not. Let. You. Speak. Period. Cheap trick #1: Goswami will speak long and loud in a preamble and then grandly say, 'The debate is now open! Answer the question!' As soon as the hapless victim opens their mouth to answer, Goswami will (often using the sound delay between cities) jump in and stomp on the poor sap, Cheap Trick #2: Someone will get half a reply out, with the main point still to come, when, again, they will be ambushed by brutal interruption, Cheap Trick #3: these maulings will force the victim to reply in sound bites, not something everyone is good at, and AG will claw some de-contextualized phrase out of the answer and repeatedly punch the 'guest' with it, Cheap Trick #4: If your English happens to be ever so slightly shaky, Goswami will jump on that like a tiger on a tied goat (his own English, it should be mentioned, is atrocious - a few pompous phrases that he repeats incessantly, in the grotesquely mutated psuedo-Shakespearean delivery he must have learnt in school).

Again, all of this is a problem because what India needs desperately is tough journalists asking straight questions of the people in power. Goswami's barrage not only obfuscates that need but also creates an environment in which such questioning becomes almost impossible. In comparison, let's just take two examples of how Boris Johnson caught it from the press over the last month or so. The first was the American journalist who asked two knock-out questions during Johnson's press conference with John Kerry: the questions were politely put yet pulled no punches - as Foreign Minister, what will you say to such and such world leaders about whom you've previously written this and this? Standing next to Johnson, Kerry visibly blanches; Johnson (plenty of time to answer, long rope) squirms from foot to foot, talking panicky nonsense in reply. Middle stump uprooted. Point made. Second, senior British TV journalist Andrew Marr eviscerates Johnson in a one-on-one interview about Boris once encouraging a man to beat somebody up. The long question ends with the words, 'You're quite a nasty piece of work aren't you?' But, again, it's done quietly, with plenty of room for Johnson to answer, or not, or squirm (Johnson fudges and squirms). Both the interrogations work precisely because there is never any feeling that anyone is shouting down Johnson, or denying him space to speak.

Now, the thing is, there is no reason why in India we cannot subject both so called 'anti-nationals' and self-proclaimed 'gau-rakshaks' to this kind of public questioning. As a sophisticated people, we totally get pauses and nuance and telling silences, it's just that for someone like Arnab Goswami, giving space to nuance and contradiction is not profitable - he and his marketing crew need to bulldoze that sort of thing because it would destroy their monster model. Far better for Goswami to be a fawning mouse when faced with Narendra Modi and far better for him to swallow serious questions about the well-being of his supposedly beloved Indian military (What about the fiasco of Modi's impromptu Rafale deal with France? Why are ancient, now dangerous, Ukrainian aircraft still the workhorses of the IAF? Why was the Mountain Strike Corps 'shrunk' by this government after having been 15 years in the planning?). Why is the Patriot Missile Arnab Goswami missing in action on asking these questions of the government? It may be totally cowardly, and totally perfidious to the spirit of our Constitution, but in these times, it's far safer to attack fellow journalists for asking sensible questions about when the AFSPA might be lifted from Kashmir and the Northeast, and about why - no matter what Burhan Wani's crimes were - are so many Kahsmiri youth out on the streets risking their lives after Wani's death?