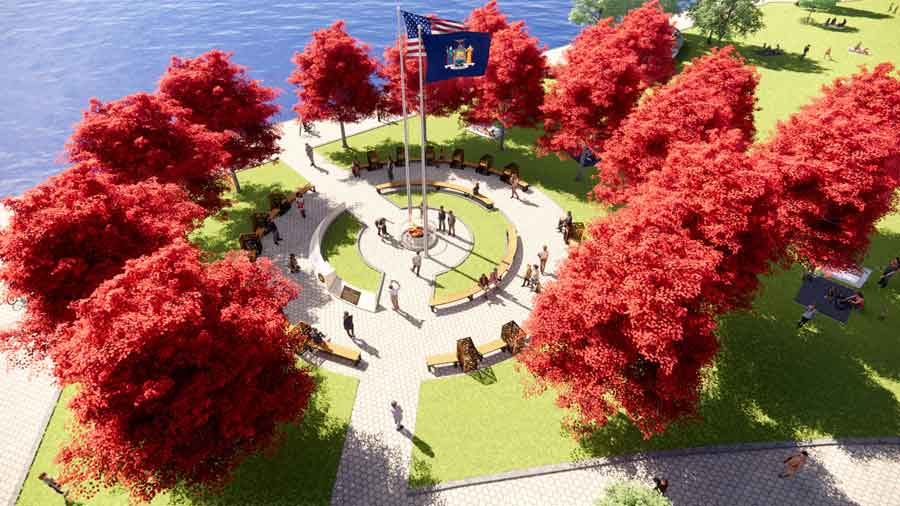 The ‘Circle of Heroes’ monument consists of 19 maple trees planted in a circle around an eternal flame symbol.
Published by The Architect's Newspaper. courtesy the Office of Governor Andrew Cuomo
Suhashini Sarkar   |   Published 03.07.21, 03:25 AM

The New York governor, Andrew Cuomo, announced a new monument in Manhattan’s Battery Park to honour the essential workers who went beyond the call of duty during the coronavirus pandemic. It was unveiled just two weeks ago after Cuomo announced the termination of the city’s Covid-19 restrictions and the state of emergency.

The gesture, however, is receiving criticism. The ‘Circle of Heroes’ monument consists of 19 maple trees planted in a circle around an eternal flame symbol. The trees each represent the 19 groups of essential workers, including doctors, nurses, paramedics, firefighters, teachers, National Guard troops, sanitation workers, food service workers and delivery drivers. The structure cost about $3 million to put together; moreover, it is in an area that is not much travelled. There is an online petition signed by over 4,700 people pushing the governor to relocate the monument. Some essential workers themselves said they used the area as an escape during stressful times. The monument occupies about two per cent of the total green area.

Essential workers expressed their dismay on social media as well as in a www.change.org petition. The House Representative, Jerry Nadler, tweeted, “New York’s essential workers deserve our honor and respect — and we can commemorate them with a memorial. But bulldozing vital open space in lower Manhattan isn’t the way to do it”. Others pointed out that it would be better for the money to be used to set up a fund for essential workers or raise their pay instead of building a monument in a space that they love.

If you take part in a bet, be careful what you put on the line. Unless you live to eat waffles. That is exactly what a man in Mississippi had to face after losing a Fantasy Football league. As punishment, Lee Sanderlin, a journalist, was required to spend 24 hours in a Waffle House in Brandon, Mississippi. With each waffle he consumed, an hour was shaved off the timer. He live-tweeted the whole experience, which started a little past 4 in the evening. He spent a total of 15 hours at the Waffle House, which is a well-known national food chain in the United States of America, with 2,100 locations mostly concentrated in the South. Sanderlin’s live tweets quickly gained traction on social media. “Waffle number 6 and I’m eagerly staring into the abyss, hoping for it all to end. Also, 4 hours down now,” he tweeted at one point.

In another post, he said: “Hello. It is hour 7. Where we stand: 6 waffles consumed. 11 hours remain. Insides are in shambles, but two kind Mississippians came in and gave me some Rolaids. Shoutout those people. Yr boy is in PAIN [sic].” Around 6 in the morning, he ordered his final two waffles and was able to leave at 7 am. “This was horrible and I recommend no one ever do this,” he said in his final tweet.

Confronting the US’s social justice issues, especially those about race, have always been a struggle for some people in the country. Now, that struggle is showing up more explicitly in the American education system as lawmakers, social justice activists and school education boards battle one another on what is ‘okay’ and ‘not okay’ to teach to kids in high school when it comes to the nation’s racist past. The term that has been extensively used is ‘critical race theory’, which refers to how racism has played a role in the creation of the US’s legal systems and policies, and how white supremacy and privilege came into being and led to the ongoing oppression of people of colour. Critical race theory is a very academic concept; it has been around for 40 years, started by a Harvard Law School professor in the 1970s.

Today, there is ongoing debate regarding teaching such a concept in high school. Nine US states have already banned it. Naysayers say it teaches children to feel guilty for being white and that it actually encourages discrimination against white people. In Florida, a school curriculum banned critical race theory and focused on teachings about “patriotism and love of country, citizenship, the US form of government and the Constitution”.

No matter which side of the aisle one is on, it is clear that these actions will spark debate around free speech as well. It remains to be seen how the courts will ultimately rule on the matter.

The US celebrated Juneteenth, also known as Liberation Day or Emancipation Day, on June 19. On this date in 1865, the last few enslaved people were freed. While most gained their freedom owing to the Emancipation Proclamation put forth by Abraham Lincoln in 1863, those in Texas were not made aware of the decree until 1865. This year marked the 156th celebration of the momentous day. On June 17th, the US president, Joe Biden, signed a law making this day a federal holiday — a huge milestone for many Black Americans.

After the signing, the vice-president, Kamala Harris, made a public statement drawing attention to the importance of the context of the moment. “We are gathered here, in a house built by enslaved people,” Harris said. “We are footsteps away from where President Abraham Lincoln signed the Emancipation Proclamation, and we are here to witness President Joe Biden establish Juneteenth as a national holiday.”

Juneteenth celebrations involve cookouts, barbecues and fireworks. It is also common for people to drink red beverages such as red soda pop, where the colour represents the struggle the enslaved people endured and the perseverance they showed. Some sources have also linked the tradition to a reference to the bloodshed that took place. People are also encouraged to shop at black owned-businesses and take the time to educate themselves on the historic significance of the day.

A study by a popular dog services site has revealed the most preferred dog breeds in the US. After mixed breeds, Labrador Retrievers, Golden Retrievers, German Shepherds and the Goldendoodle are most popular. According to the survey, more than half of American dog owners got a new dog during the pandemic. Cockapoos are the number one dog breed in New York City this year. They are a cocker spaniel-poodle mix and are known for their gentle nature.