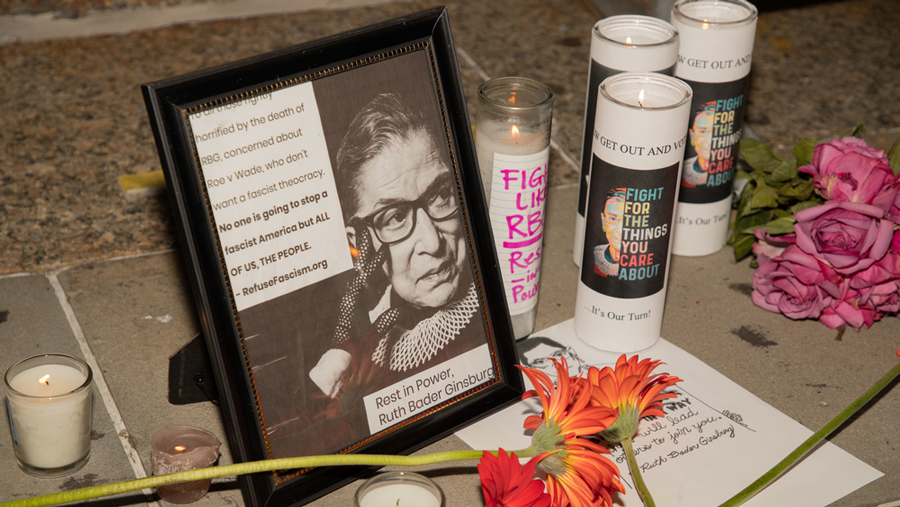 As if the year 2020 had not thrown enough curveballs already, just last week Justice Ruth Bader Ginsburg of the Supreme Court of the United States of America passed away at the age of 87 after years of battling cancer. Ginsburg was the second woman ever to serve in the Supreme Court and pioneered the movement for gender equality and women’s rights. Condolences poured in from far and wide, especially given that she passed away just before the upcoming presidential elections. Many have viewed her life and work as the last threads holding American democracy together. In New York, the 50th Street subway station has been unofficially renamed ‘Ruth St’ in her honour by the artist, Adrian Wilson.

People took to the streets in front of the Supreme Court in Washington DC. The vigil served as both a mourning and a political rally, put together by the Women’s March, Planned Parenthood Action Fund, and MoveOn Political Action. The crowd held candles as they listened to speakers celebrate Ginsburg’s achievements for women’s rights.

NPR reported that Ginsburg expressed her last wish to her granddaughter: “My most fervent wish is that I will not be replaced until a new president is installed.” President Donald Trump is set to announce his nomination for the next judge, backed by several Republicans in a dramatic act of hypocrisy. In 2016, Republicans refused to accept Barack Obama’s nomination for the next Supreme Court Justice after a vacancy, asserting that the next president should make that appointment.

The restaurant industry has been one of the hardest hit by the pandemic. After months of being shut down, eateries have begun to open up for indoor dining but are operating at less than 50 per cent capacity and require masks and social distancing. Some of them are being forced to think outside the box and use creative means to make it work. In the Upper West Side in New York City, the restaurant, Café du Soleil, is using individual plastic domes, almost like a camping tent, which it calls ‘space bubbles’, for people to sit inside. These are seven feet tall, seating between two to six guests, and protect them from inclement weather.

Hashiri, a Michelin-starred sushi restaurant in San Francisco, has done the same but with a heavy price tag. Its plastic quarantine domes can be booked for $200 per diner. Each igloo-like structure costs the restaurants anywhere between $90 per dome up to $1,400. In addition, restaurants are taking advantage of public spaces such as streets, sidewalks and parking lots to create a socially distanced dining environment while meeting public health guidelines. But now with the temperatures dipping, outdoor dining will soon become challenging.

A survey by NYC Hospitality Alliance indicated that 80 per cent of restaurant, bar and club respondents did not pay full rent in June, and 36 per cent paid no rent at all. The National Restaurant Association estimated permanent restaurant closures to be at 20-25 per cent.

The Covid-19 pandemic does not seem to be retreating any time soon in the US. States with strict mask-wearing guidelines are juxtaposed with — mostly red — states where the people do not believe in masks or to an extent even in the virus. In the midst of it all, several technologies and mobile apps have been released to aid contact tracing, keep track of symptoms and also cure boredom and isolation. Los Angeles is partnering with the developers of the app, SafePass, for contact tracing. The opt-in feature uses Bluetooth to anonymously track other app users with whom one may have come in close contact. If you have unknowingly spent an extended amount of time in contact with someone who later tests positive for Covid-19, you will receive a notification to get tested and even get a free at-home test sent to you.

Business is also booming for therapy and mental health apps. The burden of a public health crisis, isolation and unemployment is heightening anxiety and stress levels for a lot of people. The app, Talkspace, which connects people to a licensed therapist, has seen a 65 per cent increase in its volume of users since February.

September 15 kicked off the 52nd year of celebrating Hispanic Heritage Month. Currently there are around 52 million Hispanic people in the US, making it the second largest ethnic group. While Covid-19 has cancelled most big-scale events and outdoor parades, communities are trying to make sure their heritage is celebrated. In Arkansas the Plaza de las Americas-Festival de las Manos Unidas will take place virtually. In DC, the restaurant, Immigrant Food, is offering a special date night package, where 10 per cent of the proceeds during Hispanic Heritage Month will be donated to Ayuda, an immigrant services non-profit. The Smithsonian Museum of Art is opening an exhibition called Our America: The Latino Presence in American Art featuring 92 pieces by over 70 artists. In New York, the Puerto Rican singer, Bad Bunny, whose real name is Benito Antonio Martínez Ocasio, performed atop a moving bus to honour essential workers. The show, which started in the Yankee Stadium and ended at the Harlem Hospital, also honoured the third anniversary of Hurricane Maria which ravaged Puerto Rico in 2017.

The Jewish New Year, Rosh Hashanah, was celebrated this year from September 18 to 20. Spiritual leaders and observers took to virtual platforms to celebrate. Typically, the commemoration involves prayer services and a bustling gathering with Jewish foods. The New York organization, JewBelong, hosted ‘Sins, Stars and Shofars!’ — a one-hour virtual event with stories, songs and readings focused on uplifting people.