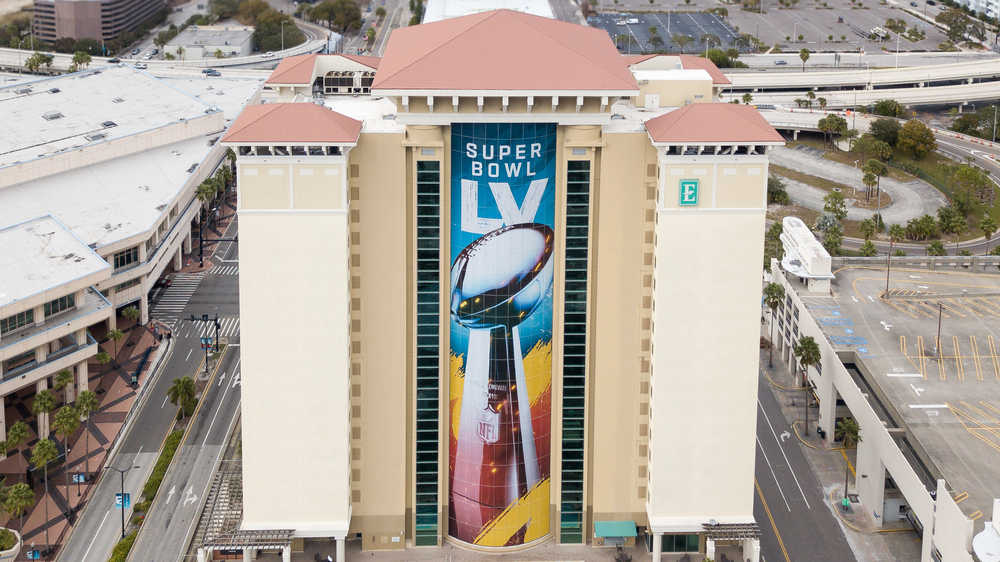 January 17, 2021: Aerial View of the Embassy Suites by Hilton with the Super Bowl LV Logo and the Vince Lombardi trophy in Tampa Florida.
Shutterstock
Suhashini Sarkar   |   Published 13.02.21, 02:54 AM

In the strangest of times, marked by a pandemic, the 55th Super Bowl kicked off in Florida, with Tom Brady taking the Tampa Bay Buccaneers to victory against the Kansas City Chiefs. The Super Bowl is one of the most widely viewed televised events and marks the second highest consumption of food in the United States of America after Thanksgiving. Advertisers spend around $5 million to bag a 30-second spot for their commercials. This year, both brands and the National Football League tried to strike the right tone given the country’s current climate — a result of the political divide, racial tensions and Covid-19-induced economic disparity.

The NFL, accused of racist practices in the past, made an announcement before the game about its financial commitment towards ending systemic racism. However, many pointed out the NFL’s continued lack of acknowledgement of Colin Kaepernick, who was kicked out of the league for kneeling during the US national anthem as a mark of protest against police brutality.

CBS also hosted a video about black players in the NFL. But the real moment came when the game host, James Brown, called the track record of team owners on hiring African-American coaches and front-office management “pitiful”. For the first time in 37 years, Budweiser did not advertise, but said in a statement that it was going to use its $5.5 million to support “critical Covid-19 vaccine awareness” with donations and future ad campaigns. Coca Cola and Pepsi also did not buy any ad space this year. The NFL was also criticized for allowing 25,000 people to attend, who sat alongside 30,000 cardboard cutouts of people in the stadium.

As the US grappled with the coronavirus, items like toilet paper and hand sanitizer flew off the shelves. Another set of items that was scarcely known in early 2020 but has now gained popularity — with an almost 500 per cent rise in sales — is oat milk and its products. We think of oats as a breakfast item, to be used in porridge, but probably not as something that can be made into a milk. According to data from Tastewise this February, consumers showed around 146 per cent more interest in oat milk products in the past year. It is known for its more durable shelf life, milder taste (compared to soy or almond milk) and sustainable methods of production.

Oat milk was first introduced to the US by the Swedish company, Oatly, in 2016. It rose to stardom when Starbucks, Dunkin’ Donuts and Trader Joe’s started selling it as well. In fact, celebrities like Natalie Portman, Oprah Winfrey and Jay Z have invested in Oatly. It is now likely to shape up to a $10 billion evaluation and could have its initial public offering this May. This Super Bowl, Oatly put on a $5 million, 30-second commercial with its chief executive officer playing a keyboard and singing about oat milk in an oat field. It got laughed at for just being awful, but Oatly capitalized on the moment by selling t-shirts that read “I totally hated that Oatly commercial”. According to the company, the shirts are now sold out.

This Valentine’s Day people will have to learn to date with a distance of six feet maintained. But while Covid-19 may have hampered many plans, some traditions are still intact. In New York, the Bronx Zoo is again offering its ‘Name a Roach’ programme, where you get to name a hissing Madagascar cockroach after your loved one for a $15 donation and a certificate. This year the zoo has introduced a plushie roach, a scented roach candle and a special Valentine virtual Bronx Zoo Animal Encounter with a live Madagascar hissing cockroach. The El Paso Zoo in Texas is promoting its event, ‘Quit Bugging Me’. Here too, you can also name a Madagascar cockroach, but this one will be named after your former partner because you can then proceed to watch an iguana or a meerkat chomp up the bug.

Valentine’s Day is also an occasion for high spending . According to the National Federation Foundation, spending this year is supposed to be $21.8 billion. Many stores are offering fun deals. At Hooters, you can have a picture of your ex shredded to bits by a shredder.

Two weeks ago, cable TV and the internet were focused on the stock saga of Gamestop, a dying Fortune 500 company that saw a 1,500 per cent rise in its stock price because of a few amateur investors online who wanted to teach Wall Street a lesson. The video game retail store had been struggling as a business both because game purchases have largely gone digital now, and also because of the pandemic. Institutional hedge funds shorted their Gamestop stock — that is, betted against the company — as a result. To send a message to these short-sellers, a bunch of users on Reddit’s sub-group ‘WallStreetBets’, banded together and started buying Gamestop shares, causing the price to soar. Many Redditors said it was to teach Wall Street a lesson for betting against businesses going through tough times. Others jumped on to the subreddit bandwagon to make money. While the US Securities and Exchange Commission is investigating this matter, it is hard to prosecute. It is examining the Reddit post to sniff out intentional market manipulation as laws bar the dissemination of false or misleading information aimed at manipulating investors into buying or selling securities.

The hedge funds who had shorted the stock reported a $19 billion loss. The popular trading app, Robinhood, was criticized for preventing anyone from trading on Gamestop on that day. As many pointed out, the market is only free until rich people lose money.

February 12 was Lunar New Year. The Smithsonian American Art Museum offered a free virtual celebration in partnership with the Chinese Cultural Institute and the Chinese embassy. McDonald’s hosted a virtual mini-concert with the Chinese hip-hop artist, Masiwei. It also created the custom red envelopes traditionally filled with money and given to friends and family for luck and prosperity; the first 888 people who bought from the 88 Rising Night Market that started on February 8 received one.