Advertisement
Home / Opinion / A notch above the rest: There is much that other Asian cricket teams could learn from India

A notch above the rest: There is much that other Asian cricket teams could learn from India 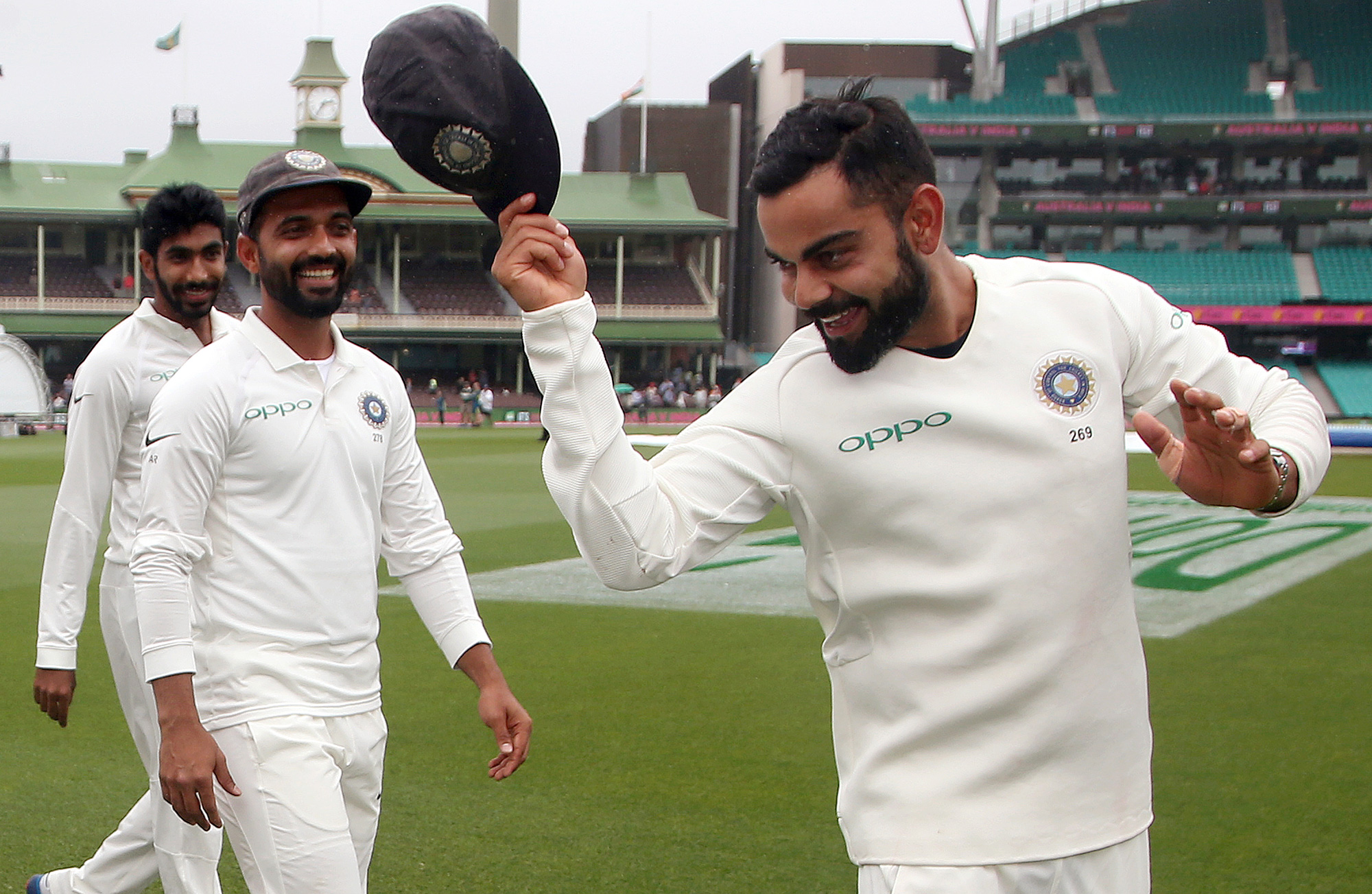 Virat Kohli tips his hat as he celebrates with teammates India's series win over Australia after play was called off on day 5 of their cricket test match in Sydney on Monday, January 7, 2019.
AP
Hassan Cheema   |   Published 10.01.19, 05:31 AM

In the end, it was a bit of an anti-climax. The first Asian side to ever win a Test series in Australia clinched this historic achievement in front of a sparse, rained-out crowd. But to those who were celebrating — on the ground, in the stands, or across the Indian Ocean — none of that mattered. Virat Kohli’s India had succeeded where everyone else before them had failed. In the annals of history, the caveats won’t matter: no one will care that Steve Smith and David Warner were missing, just as no one cares now that India’s drawn series against Australia in 2004 was against a team without Glenn McGrath or Shane Warne; or that perhaps Pakistan’s greatest away series, a drawn series in the West Indies in 1988, came against a bowling unit in transition.

All we will be left with is the bare fact: Virat Kohli’s India conquered Australia.

This series win is a culmination of over two decades of progress in Indian cricket. From the injection of corporate and television money in the 1990s, which led to the first wave of professionalism, to the IPL generation doing something unprecedented it’s been a long, and not always smooth, journey. There have been hiccups along the way (Greg Chappell), but a couple of decades on from when every away Indian tour was an exercise in futility to becoming the best touring side in the world, India have come a long way. From 1987 to 2000, India won just one away series (in Sri Lanka). In 2018 alone, India have had three better away tours than those they did in the 1990s.

The reasons for this are manifold: injection of finances helped; but so has a generation which grew up competing together with and against the best in the world in their own grounds, a generation that defines itself with the title of best in the world, no matter what the format. The bridge between these two worlds was an extraordinary generation or two of cricketers, led by the likes of Sachin Tendulkar, Rahul Dravid and Anil Kumble, who altered the expectations and the fortunes of Indian cricket.

The bugbear of many traditionalists, the Indian Premier League, has helped. The likes of Jasprit Bumrah, Kuldeep Yadav or Rishabh Pant may have come through two decades earlier too — via the Ranji Trophy — but it’s hard to believe that their transition to the Test game would have been as smooth or successful had it been in the pre-IPL era.

But more than anyone else, this success lies at the feet of India’s captain. For all the success India had before Kohli, they were still not an extraordinary touring side. Under M.S. Dhoni, they won only four of their 26 Tests outside Asia, and their response to sledging then was along the lines of ‘we will reciprocate when you tour India.’

That’s a mindset that Kohli has obviously tried to change. Over the 12 Tests India have played in South Africa, England and Australia over the past 12 months, they have repeatedly found conditions to be alien to what they’re used to. Yet, not once have we heard the Indian captain talk about that as a disadvantage. When South Africa won the first Test last January on a pitch where 18 wickets fell on a single day, Kohli declared the surface as “outstanding”. Prior to the following tour to England, Ravi Shastri was even more unequivocal, stating, “My philosophy is very simple — [in] your country, I don’t ask questions. [In] my country, you don’t ask.”

That’s perhaps been the hallmark of this Indian team. While pretty much every other team in the world has the ready-made excuse of ‘foreign conditions’ in an away series to fall back on, that’s a safety net that Kohli and the Indian team management have removed from their team’s vocabulary. This may seem like a minor issue. But in the world of elite-level sport where marginal gains make the difference, these things matter.

There is much that other Asian teams could learn from India. An investigative report by ESPNcricinfo in 2017 showed that the Bangladesh and Pakistan captains earn less annually from their boards than the Ireland captain does. That’s an indication of just where they’ve gone wrong. Post-liberalization, India has maximized its cricket while the governing boards in other Asian countries can still best be compared to sarkari institutions in the subcontinent. In the end, you get what you pay for.

But that’s a symptom, not the cause for the discrepancy. For all the problems the Ranji Trophy might have, it may still be the best first-class tournament in the world — it certainly is when compared to other Asian nations. A combination of the Ranji Trophy and the IPL is now producing better cricketers than anywhere else in the world. Rather than trying to chase what this Indian team is, other nations would be better served trying to understand how they came to be. In addition to all this, senior players across the world can learn a lot from the mentorship provided by two generations of Indian players, first by the Tendulkar and Dravid generation and then by Dhoni and Kohli. It’s a common trope in Pakistan, for instance, that senior players don’t allow juniors to progress because of their insecurities — that’s a phrase you haven’t heard regarding Indian cricket for years.

Unlike what the stereotype and the nationalists might suggest, there is little hate for what India has achieved in Australia — envy, for sure, but even that is less than the admiration. This was best exemplified by the current prime minister, and Pakistan’s greatest cricketer, congratulating Kohli’s squad. The overwhelming emotion is admiration. This current Indian team is better liked in Pakistan than nearly all the others before it. Kohli is perhaps the most popular Indian cricketer there has ever been in Pakistan because for Pakistan fans he, in his uncouth and assertive way, reminds them of their greats of the past. Kohli, perhaps, is a more natural successor to Javed Miandad than any Pakistani cricketer since Javed. While Indians of a certain ilk tut-tutted about Kohli’s on-field antics, Pakistanis were reminded of the fact that their greatest batsman once tried to hit Australia’s best bowler across the head with his bat. Kohli’s indiscretions pale in comparison.

There’s also the small matter of how the roles have reversed since the 1990s. Now it’s Pakistan that get routinely routed by India in most matches, and its their fans who clutch at straws. In the 1990s, Indian fans hung on to India’s World Cup record against Pakistan as being bigger than all the bilateral and multi-nation tournaments. Now Pakistan fans hang on to the Champions Trophy final of 2017 while turning a blind eye to everything else. And in it all, Kohli is to Pakistanis now what Wasim Akram would have been to Indians in the 1990s — too good for anything but fawning over.

But both nations and boards could learn from each other. Pakistan can learn how competence and excellence breed success, both in the team and the board. Indians, meanwhile, can learn from both Pakistan and the conquered Australians that they must savour these moments and that complacency can snowball into them falling off their perch. Thankfully, in Virat Kohli they have a leader who is unsatisfied with anything but being atop the perch.

The author is a sports journalist based in Pakistan