A day with Drèze

An ascetic, teacher and humanist 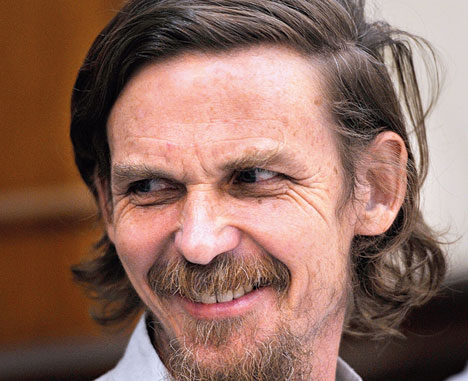 The most famous resident of Ranchi is a wicket-keeper-batsman whose roots lie originally in the state of Uttarakhand. Another migrant to the capital of Jharkhand is equally well regarded in his profession, and equally independent-minded. The cricketer has provided Indians with a great deal of sustained entertainment, whereas this other resident of Ranchi has augmented their livelihood security, helping to save many of them from destitution. He played a central role in the conception of the National Rural Employment Guarantee scheme; helped draft the NREGA, and continues to monitor its implementation. He also contributed to the Right to Information Act and the National Food Security Act of the Government of India.

I was in Ranchi in early February, speaking at a convention of psychiatrists. I knew M.S. Dhoni was not in town; and, in any case, I would have had little to say to him (and he even less to say to me). But I did want to meet this other Ranchi vasi, and took care to make an appointment in advance. I made sure he would be in town, for, like his more famous fellow townsman, he travels a great deal, although he takes trains and buses rather than flights, and spends his nights in village homes rather than in grand city hotels.

I had met Jean Drèze several times before. Once, in the early 1990s, when he was teaching at the London School of Economics, and living in a working-class tenement. A second time, in the late 1990s, when he was teaching in the Delhi School of Economics, and living in a jhuggi-jhopri colony in Timarpur. A third time, in the early 2000s, when he was visiting Bangalore, and I dropped him at the railway station where he took a train, travelling unreserved to places further south to study the implementation of the mid-day meal programme in small towns and villages across Tamil Nadu. On another occasion, I visited an NGO working among tribals in Odisha to find that Drèze had just left my hosts, having chosen to spend a week walking from Kashipur to Rayagada, stopping in hamlets on the way when he was not sleeping under the open sky. And one time, when we were due to meet in Delhi, he had to abruptly cancel as he had to fly urgently to Brussels. Drèze was in the process of getting Indian citizenship; that was hard enough, but even harder, apparently, was getting the Belgians to agree to his no longer being a Belgian.

In between these episodic meetings, Jean Drèze and I had corresponded. We had commented on each other's work, sometimes critically. We both thought that the State had to complement the market and correct for its excesses; but in this balancing act, he veered more to the side of the State than I did.

Jean Drèze is a year younger than me. We both took our PhDs in India; we have both worked mostly in India and written largely about India. But otherwise our personal biographies are very different; and one reason for my visiting him in Ranchi was to find out more about his life story. We met by arrangement at his office at the Department of Economics at Ranchi University, before proceeding on his motorcycle to the main road that links Ranchi to Hazaribagh. We drove for half-an-hour on the highway before turning off into a dirt track. We bumped along this path for a bit before parking the bike under the shade of a pipal tree. Then we went for a long walk, culminating in a rocky hill on which we sat, contemplating the countryside below. We looked out over a valley through which a stream flowed, with Munda homes painted a lovely shade of turquoise blue visible on the other side. Here, in this still largely unspoiled landscape, I got my friend to talk.

Jean Drèze was born in 1959 in the ancient town of Leuven. His father, Jacques Drèze, is one of the world's great economic theorists and a celebrated teacher as well. Drèze père and his wife were also extremely public-spirited; and Jean grew up in an atmosphere composed equally of scholarship and service. One of his brothers became a left-wing politician; a second was a professor of marketing; a third is a translator.

Jean Drèze himself took a first degree at the University of Essex before an interest in development economics brought him to the Indian Statistical Institute in New Delhi. While studying at the ISI, he met Amartya Sen with whom he has since written four books (and edited two others). I have heard Sen say that Drèze does 90 per cent of the work while he himself gets 90 per cent of the credit. This, of course, is an exaggeration; it is probably closer to 50-50, an intellectual collaboration in which neither could do without the other while their readers remain grateful to both.

Sen teaches at Harvard. Drèze, having decided to live in India, taught first at our finest centre of economic research, the Delhi School. Then he moved to a job at Allahabad University and, later, to Ranchi. Teaching less privileged students and working in the poorer parts of India were part of his dharma as a development economist. It was also consistent with his character, which is that of an ascetic. He does not accept a salary. His needs are modest, to be met by book royalties and newspaper articles. Meanwhile, from his years doing fieldwork in rural India, he has acquired near-native fluency in Hindi.

After several hours in the hills, we walked back to Jean's bike. We stopped for lunch at a roadside dhaba (bearing the lovely name, Mansarovar) before proceeding, at my request, to his home. This consists of one room at the back of a hut in a tribal village that lies at the city's outskirts, and surely (and sadly) will soon be swallowed by the city. On one side of the dwelling is a clump of bamboo; in front, a tamarind tree. Jean brewed me a cup of tea as we talked some more, while a crimson-breasted barbet called from the trees outside.

In the course of our conversations, Jean Drèze told me that he hoped to start a newspaper column in Hindi. In his years as an Indian, he has written a great deal already in English. His columns have recently been collected in a book called Sense and Solidarity, with the self-deprecatory sub-title, Jholawala Economics for Everyone. The essays cover a wide range of themes; from food security to healthcare to the rights of children to the threat of nuclear war. They draw on a deep, profound understanding of the lives and struggles of peasants, tribals, workers and migrants. The prose is always clear, the analysis sharp but rarely polemical. Anyone with any interest in the fate of democracy and development in India should buy the book at once.

I am, as I said, more or less as old (or as young) as Jean Drèze. We are both in the business (if he will permit me to call it that) of writing books and essays on India. And, since 2002, we also carry the same kind of passport. I am proud to be his contemporary, prouder of being (in professional terms) his colleague, and proudest of all of being his compatriot.