The Scotsman who befriended Vivekananda and Tagore 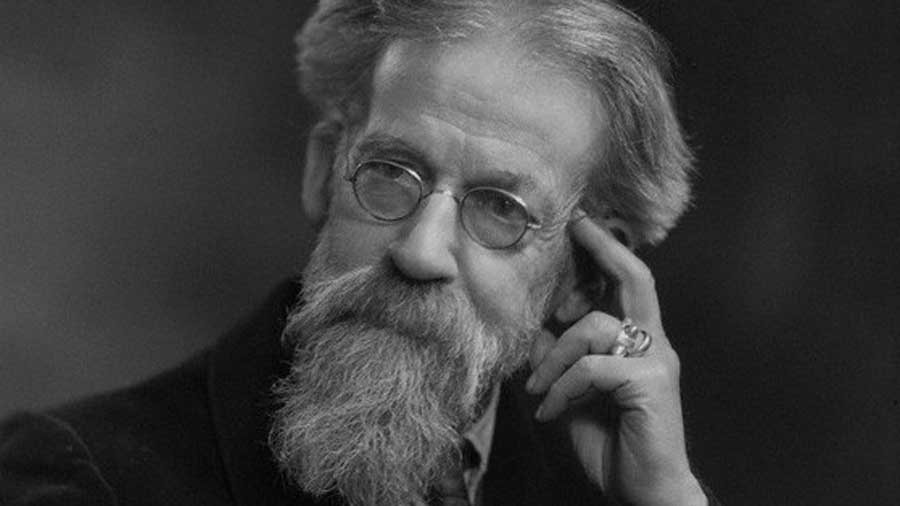 The Scottish ecologist and the Bengali poet were brought together by many things: by their common interests in an integrated and experiential approach to learning, by their internationalism, by their love of nature and their deep respect for the limits of human knowledge
Wikimedia Commons
Ramachandra Guha   |   Published 18.07.20, 12:31 AM

Arguably the two greatest modern Bengalis were Swami Vivekananda and Rabindranath Tagore. Both have had a colossal and still enduring influence on their state, their country, and the world. Tagore and Vivekananda were close contemporaries, and both lived in and around Calcutta. And yet, while they undoubtedly knew of each other’s work, they seem to have met only once, at a tea party hosted by the wife of the American consul-general in January 1899.

This column is about a remarkable Scotsman who befriended both Vivekananda and Tagore. His name was Patrick Geddes. While admired in ecological and town-planning circles around the world, Geddes is not someone even the most educated Bengali is likely to have heard of. Yet this was a man of whom Tagore once remarked that he had “the precision of the scientist and the vision of a prophet; and at the same time the power of an artist to make his ideas visible.”

These words are quoted in the fine new book, Patrick Geddes’s Intellectual Origins (Edinburgh University Press), by the historian, Murdo Macdonald. Macdonald stresses Geddes’s interdisciplinary approach to knowledge. He was at once a botanist, an ecologist, a geographer, a sociologist, and, not least, a town-planner, in which profession all these disciplines were synthesized. Unlike most scientists (as well as most social scientists), Geddes also had a strong visual imagination.

Patrick Geddes first met Swami Vivekananda in America early in 1900, when both were lecturing in that country. They then met again in Paris in the summer of the same year, when the French capital was hosting a World Fair in which Geddes had a stall. Accompanying the Swami in his travels was his disciple, Sister Nivedita. Although Vivekananda died shortly afterwards, Geddes kept in close touch with Nivedita. The Scotsman and the Irishwoman got along famously. Nivedita introduced him to Indian spirituality via the teachings of Ramakrishna; Geddes introduced her to human geography through the works of the French scholar, Frédéric le Play. Nivedita’s book, The Web of Indian Life, was dedicated to Geddes, for “teaching me to understand a little of Europe”.

In 1903, Sister Nivedita wrote to Patrick Geddes about a planned university in India. The funds for this venture would come from the industrialist, Jamsetji Tata, who had been advised by Swami Vivekananda to invest in the scientific future of India. The Swami was now dead; so Nivedita asked Geddes, as a long time professor himself, to send some suggestions about how this new Indian university should be structured. He wrote her a stream of letters, which provided a panoramic survey of medieval and modern universities in Europe and America, of their systems of teaching and learning, of what lessons and warnings they held for those wishing to start a university in India.

In his letters to Nivedita, Geddes outlined a deeply ecological approach to education. Thus he wrote: “Beginning with our immediate landscape with nature-study, with geography in the more physical sense, we relate this to our social life, through nature-occupations: from these develop our institutions, and their associated or resultant ideas. We trace these in widening circles throughout the vast field of geography, the wide range of history; and these alike in their simple and their evolved aspects, both objective and subjective. That is, on each level we enquire, first, how nature has conditioned occupation and institutions; but next, how ideals have reconditioned spiritual and temporal life, have determined education, and have expressed themselves in literature and art.”

When the Indian Institute of Science was started with Tata funds in 1909, it had no department of geography or of what Geddes had called “nature-study”. It was only in the 1980s that the institute established a Centre for Ecological Sciences, which has since done excellent research on human-nature interactions.

Sister Nivedita died in 1911. Three years later, inspired by her memory, Patrick Geddes came to India. He spent much of the next decade in the subcontinent, studying the processes of urbanization. I have written about his precocious and still relevant work on Indian town-planning elsewhere. Here, I wish to focus rather on his connections with Rabindranath Tagore.

Tagore and Geddes first met in Calcutta in 1915. They met again in Darjeeling in the summer of 1917, in the home of the scientist, Jagadish Chandra Bose (whose biography the Scotsman was later to write). For many years thereafter, they carried on a sporadic but always interesting correspondence (reproduced in The Tagore-Geddes Correspondence (Kolkata: Visva-Bharati, 2004) edited by Bashabi Fraser). Thus in April 1919, Geddes wrote to Tagore, “Congratulations on your lectures on ‘Education’ & on ‘Forest’, each so fine in its own way.”

Three years later, Geddes sent Tagore a scheme for the integrated teaching of disciplines, a scheme that he somewhat presumptuously suggested could be used in the university Tagore was building in Santiniketan. In reply, Tagore told Geddes: “I have often wished for my mission the help of men like yourself who not only have a most comprehensive sympathy and imagination but a wide range of knowledge and critical acumen. It was with a bewilderment of admiration that I have so often followed the architectural immensity of your vision. But at the same moment, I have had to acknowledge that it was beyond my power to make a practical use of the background of perspective which your vision provides us with. The temperamental characteristics of my own nature require the greatest part of my work to remain in the sub-soil obscurity of mind. All my activities have the character of ‘play’ in them — they are more or less like writing poems, only in different media of expression. Your own schemes also, in a great measure, have the same element which strongly attracts me, but they have a different idiom, which I have not the power to use.”

In 1924, Geddes returned to Europe where he set up an institute in the French town of Montpellier. Two years later, he wrote to Tagore: “At a recent discussion here, we were all lamenting that though the various revolutionary parties have plenty of songs, the more truly progressive ones are still mostly without them. We especially bewailed the lack of any song which could express the movement of international sympathy and good-will, of which the League of Nations, with all its limitations, is the expression... So, as the conversation went on, all with one voice agreed that we must ask that needed song from — Tagore! Will you write it? An admirable musician, a true idealist, who is head of our Conservatoire of Music in Montpellier, and an invaluable influence accordingly, will be able not only to get us a good translation into French, by one of our young poets, but will himself do his utmost to set it to European music, if yours proves difficult for us in the west.”

Replying to this request, Tagore said: “I shall try to write the song you asked from me but you must know that your language does not surrender itself to my muse as easily as my own mother tongue. The initial barrier of diffidence frightens me off from the task.” (It seems the internationalist song asked for was in the end not written.)

In August 1929, Geddes wrote to Tagore: “Last night I was reading again your ‘Creative Unity’, and with fresh interest and renewed pleasure. How I wish I could put ideas as you do! We have ideas, that need also to be expressed, but (for lack of the Love-Unity, I fear) expression is lacking!”

In 1930, Geddes invited Tagore to Montpellier. That summer Tagore was giving the Hibbert Lectures at Oxford. He was all set to see his friend in France, but then he had a pain in his chest, and his doctor advised him that to be fit for his Oxford assignment, he should cancel his Montpellier trip. So he did, to both men’s sorrow, and regret. They never saw each other again.

The Scottish ecologist and the Bengali poet were brought together by many things: by their common interests in an integrated and experiential approach to learning, by their internationalism, by their love of nature and their deep respect for the limits of human knowledge. As Murdo Macdonald writes: “Tagore and Geddes shared a great deal. Both took interdisciplinarity for granted, both were extraordinarily active in cultural revival, both appreciated the importance of ecology.”

Geddes’s intellectual legacy was admirably carried forward by his American disciple, Lewis Mumford, whose great books, Technics and Civilization and The Culture of Cities, bear the impress of his master’s teachings. Mumford once remarked of his mentor that “Geddes’s Scotland embraced Europe, and his Europe embraced the world.” We can likewise say of Geddes’s friend that ‘Tagore’s Bengal embraced India, and his India embraced the world’.