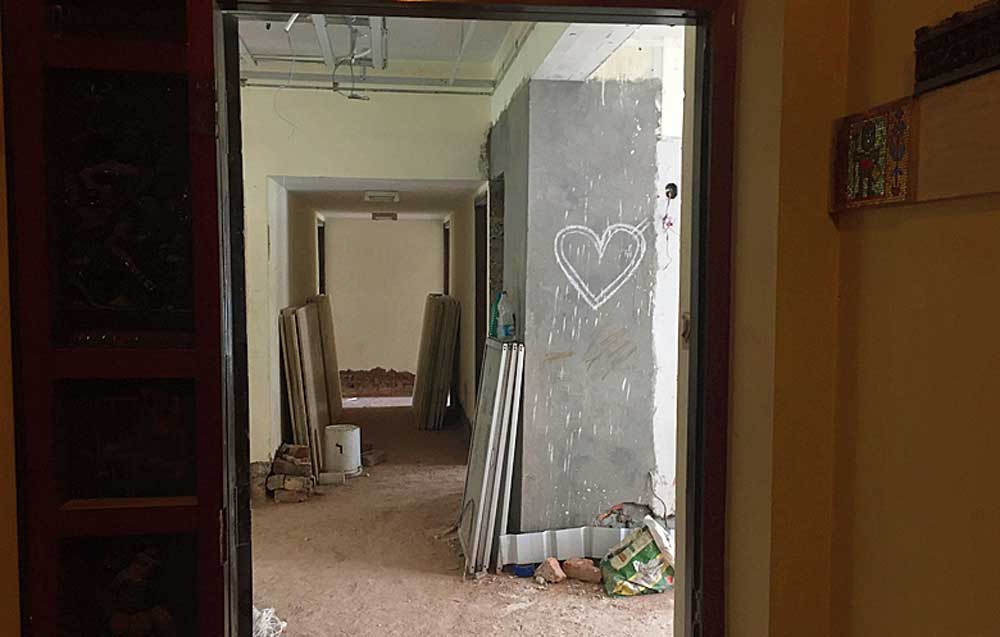 What was this folly that went on and on? Some kind of a tax whizz for somebody who would never actually move in? Or maybe a showpiece flat to advertise the designer’s prowess?
(Ruchir Joshi)
Ruchir Joshi   |   Published 26.03.19, 04:14 AM

Someone I know has been suffering from a strange and extreme kind of neighbouritis. The illness normally afflicts one because the people living next door, or in the close vicinity, enter into some activity, either short-term or long-term, that causes distress and discomfort to the sufferer. In a classic example, short-term neighbouritis can be caused by the loud party that goes late into the night, or it could be the sangeet for a wedding that inflicts out of tune bhajans and karaoke-sung film songs that blare out from loudspeakers for days on end; in another variation someone in an apartment building could decide to have some ‘guruji’ or ‘maharaj’ come and live in their house for a period of time, with the holy man’s followers from all over town trooping in and out of the building all day, making little congregations at the entrance, staring at residents who don’t look or dress like them, clogging up the lifts and the driveway. Typically, these are all time-bound assaults which end after the party, the wedding or the thrash of spiritual ecstasy have run their course.

A far more annoying strain of the disease is when a neighbour embarks on repair, improvement or redecoration of their flat. This involves the flat-owners themselves decamping to some other residence and leaving their property in the hands of the workmen. What then ensues is the daily, day-long concert of horrible sounds: the hammering, the sawing, the buzz of the marble-cutting, the brain-piercing sound of various drills. All this is accompanied by the pall of constant dust that is produced, it seems, specifically for the hapless neighbour’s floors and furniture, plus the stink of paint and varnish, added to which come the piles of rubbish that are left everywhere till trucks come at the end of the project at the builder’s convenience. Again, this redecoration torture usually gets over in a month or two. The person I know — let’s call them Hapless — has been undergoing this strain for so much longer that I think it qualifies for an enhanced nomenclature — perhaps one could call it Neighbouritis Ultra (Redecoritis).

The story began when the people next door to Hapless sold their flat and left for good for another city. Hapless did not get to meet the new incoming neighbours but imagined that soon there would be a ring of the doorbell and introductions would ensue. No chance. A few weeks after the sale, some men came to survey the newly bought flat, but they were not the neighbours. After a while workmen began to land up every morning and noises began to emanate from the apartment. Hapless had planned a long trip away from the city and duly left, imagining that upon return they would find the new neighbours installed. Returning after four months, Hapless found that the work on the neighbours’ flat had only just begun, like the first strains of an overture of a long symphony, or rather like the singer’s throat-clearing before an all-night session of religious song.

Hapless’s previous neighbours had been reasonably wealthy people of reasonable good taste. Their apartment, on the larger apartments side of the building, had been lovingly decorated in the 1970s and 80s with floors of the best marble from Rajasthan, solid woodwork for the shelving, probably with some teak and pine, the furniture and shelves all made with good, mostly unfussy, designs of straight lines and clean curves, the bathrooms redone several times over the years, most recently with modern textured tiles, and so forth. Clearly, all this was of no use to the new incoming occupants. Clearly they wanted to do their own thing. So, for months on end, the apartment was stripped of its furnishings and the stuff taken away. Again, clearly, the designer doing the redecoration knew the value of the material being superseded and great care was taken in dismantling it and carting it away with re-use very much on the agenda.

After the woodwork went, the karigars began work on the nice Rajasthani marble floor. The noise of hammering bounced through the building, the buzz of saws cut through the perusal of morning newspapers, afternoon siestas and evening television. Whenever Hapless summoned up the courage to open the door and venture out, what would be waiting was a mist of marble dust through which figures, seemingly from some distant feudal past, hoisted large slabs of stone down the stairway. After a few days the reverse began to happen. Almost as if in a movie on rewind, the same workers began to struggle up the stairway, carrying huge slabs of differently coloured marble streaked with veins of contrasting hues. “Italian marble hai,” the building darwan informed Hapless when they went downstairs, ‘kuchh karara marble bolta hai isko.” Till then, in Hapless’s blindered imagination, Carrara marble meant the Mullicks’ Marble Palace, or the grand palazzos in Venice, or Versailles, or Michelangelo standing in the dusty quarries picking out the perfect blocks for his Pietà or David, that sort of guff. Here was stone that had the bunga-bunga stamp of gaudy Berlusconi on it, or perhaps it was the flooring equivalent of a suit made with your name stitched into the piping with gold thread.

After a while, the noise of the marble being bedded down took over the environment. By now Hapless had forgotten when they had last opened their windows during daytime, for doing that meant the marble dust crept into everything in their flat. The time came for Hapless to leave again on work, and they left with a huge sigh of relief. Surely this hell would be over by the time they came back? When Hapless returned six months later, they could hear the gods of Interior Decoration laughing at them even as they stepped out of the prepaid pili-pili taxi. The Italian marble had made itself home by now, but it now needed to welcome high-end plywood ‘decoration’ on each wall, not to mention the false ceiling for the air conditioning which, of course, involved weeks of drilling. Every now and then, Hapless would try and negotiate with the thekedar and the Designer who would tell them that work would ‘soon be over’. Every now and then Hapless would dial or whatsapp the number they had been given for the new neighbour but there was no reply.

After nearly two years of this, the penny finally dropped: this was a folly that would go on and on; there was no new neighbour coming in; this was clearly some kind of a tax whizz for somebody who was actually going to live in that super-tall building on the horizon; something to show that work was ongoing in this little side-flat and could count as a loss, some arcane, highly advanced chess move against taxation; maybe a showpiece flat for advertising the designer’s prowess; whatever, but something way outside Hapless’s ken.

After a while, when the noise stopped for the day of Eid or Holi, Hapless began to feel restless, ostracized, sent to Coventry, sent into some aural solitary confinement. One day, when the Designer rang the doorbell, Hapless greeted him with the joy and enthusiasm that someone with advanced Stockholm Syndrome greets their kidnapper. “Ji, we needed to discuss the design for the hallway with you.” “Yes?” The Designer unfurled his ‘design’. Hapless had never had the pleasure of visiting any such establishment but suddenly they were looking at a design for what they imagined could only be the hallway of a 3-star brothel: a wooden grid on the ceiling with hidden spotlights, an arch of shiny black marble around the old lift, a wallpaper of exposed luridly red bricks. Hope rising, Hapless asked, “Is this the last thing?” “Yes, ji, yes! We are almost done!” “Are you sure?” “Yes, yes, now we just need a few weeks to install the furniture and then we do this hallway and we are finished! It will look great!” As Hapless opened their mouth to answer, the sound of a marble saw started up. Hapless stared hard at the designer. “That?” The Designer smiled widely. “Oh, don’t worry, that’s not us, that’s in the next building. They are starting work on the second floor over there.”

Sound pollution is emblematic of a rot in the moral fibre