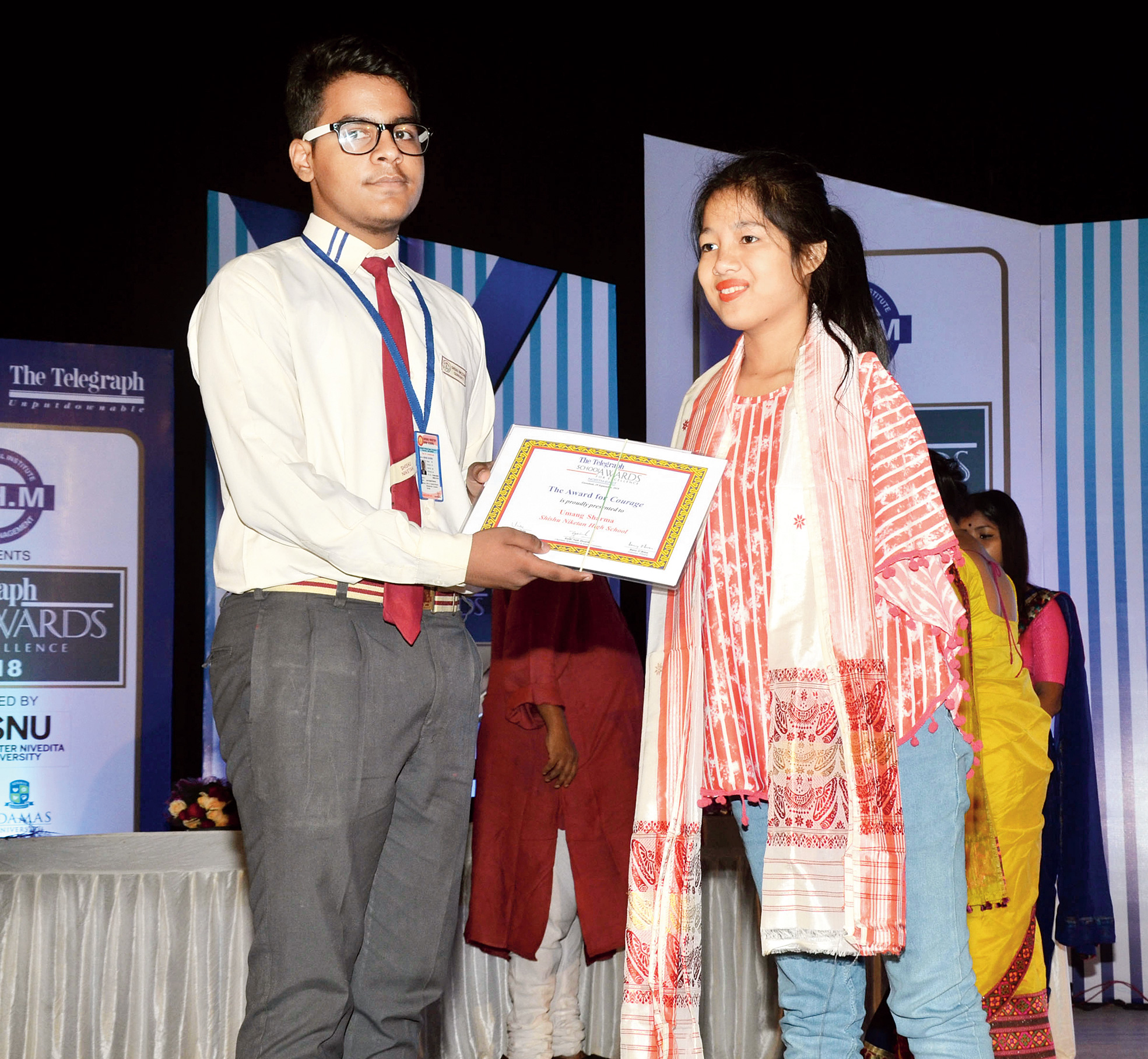 Adversity brings out the best in us.

The adage has been again proved right by Umang Sharma, a class IX student of Shishu Niketan High School, winner of the award for courage at the first edition of IIHM Presents The Telegraph School Awards for Excellence 2018 Powered by Sister Nivedita University at ITA Pragjyoti Centre for Performing Arts here on Saturday.

The awards, administered by The Telegraph Education Foundation, was launched in 1996 in Calcutta.

Umang lives with his mother Kamlesh Sharma and elder brother Piyush in a single room on the third floor of a building provided rent-free by owner Pallavi Lahkar Bora at Bharalumukh in the city. A small kitchen by the stairs and a tin-roofed toilet on the terrace comprise the amenities.

After the untimely demise of his father Daulat Sharma owing to a heart ailment two years back, Umang’s mother supports the education of her sons by working as a domestic help at her landlord’s house on a salary of Rs 4,000. Daulat worked as a manager in a confectionery shop before his career and life was brought to a sudden halt by a heart attack in 2016.

The Sharmas, hailing from two villages near Jaipur in Rajasthan, have been living in the city since their marriage in 1999.

Umang was offered a scholarship by school principal Reena Bhowmick owing to his diligence in studies and his father’s sudden death. Despite the sorrow and privations, Umang managed to score 70 per cent marks in the annual examinations of class VIII. The Rs 950 monthly school fee has been waived while his books have been culled from other students promoted to class X or bought second-hand.

Piyush is also a brilliant student and has won awards from Shishu Niketan before passing out and getting admission in KC Das Commerce College where he is pursuing BCom. Umang is fond of science and mathematics, having opted for advanced maths, and wants to carve a career in engineering although he has not zeroed in on the branch he wants to specialise in.

“I just want my sons to develop into good human beings and succeed in life. Privations don’t mean anything to me but my sons should not lack the means to carry on their studies. I am thankful to The Telegraph for selecting my younger son Umang for this award,” said Kamlesh.

Umang has kept the faith — so far.