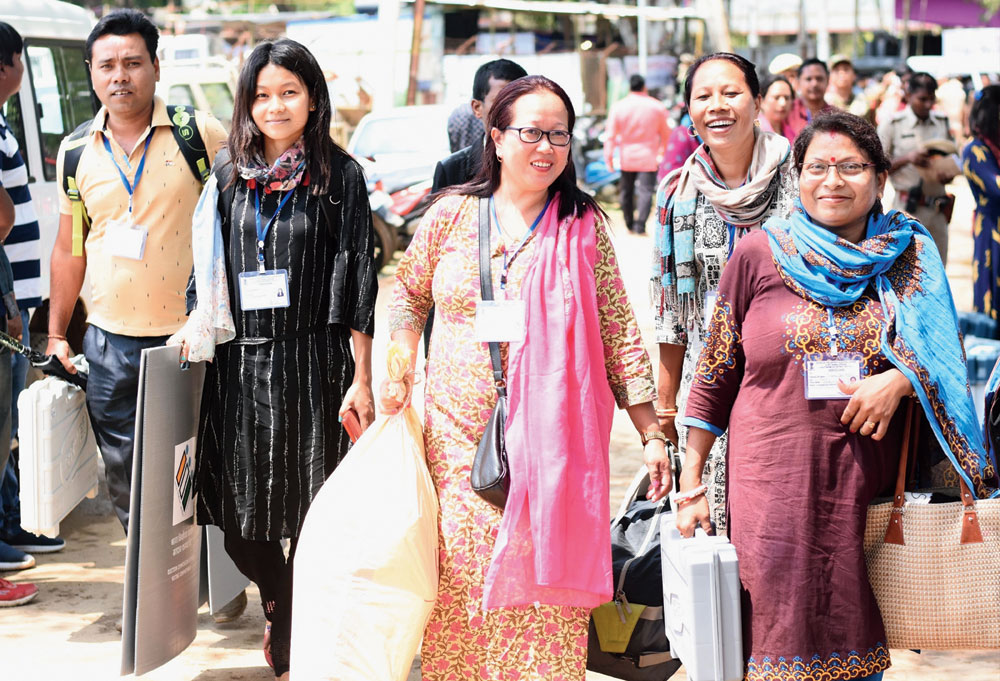 All eyes will be on the weather as six Lok Sabha constituencies in the Northeast, including five in Assam, go to polls on Thursday.

Thunderstorms and short, sharp showers over the past two days have triggered apprehensions that inclement weather could affect the voter turnout.

Weathermen on Wednesday warned that thunderstorms with gusty winds blowing at a speed of 40-50kmph and hail may occur in Nagaon, West Karbi Anglong, Kamrup and Nalbari districts where voting will take place on Thursday.

Five constituencies in Assam — Karimganj (SC), Mangaldoi, Silchar, Nowgong and Autonomous District (ST) — and one in Manipur (Inner Manipur) will go to polls in the second phase on Thursday.

Voting was also scheduled to be held in the Tripura East parliamentary constituency on Thursday but the Election Commission on Tuesday deferred it to April 23 following apprehensions on the “law and order situation”.

Assam chief electoral officer Mukesh Chandra Sahu said necessary precautions are being taken to see that voters are not inconvenienced if the weather takes a turn for the worse. Rituraj Bora, the deputy commissioner of Morigaon, and Mukul Saikia, his Karbi Anglong counterpart, told The Telegraph they were set for Thursday’s polling but were hoping the weather would hold.

“The weather was pretty bad till noon. The road to a village got blocked by uprooted trees which we managed to clear for polling personnel to reach their polling stations in time. We hope we have no such issues tomorrow,” Bora said. Saikia said incessant rainfall till noon, especially in the Singhason Hill region, had made several roads inaccessible. “We had to use bulldozers to push vehicles carrying polling personnel to four polling stations located on the hills. There was tension but now everything is under control. We hope the weather remains clear tomorrow,” Saikia said.

He said 147 polling parties left for their respective polling stations on Wednesday while 97 had departed on Monday and Tuesday.

“We hope the weather will not play spoilsport on Thursday,” Rajkhowa said.

For the second phase in Assam, 50 candidates, including three women, are in the fray. Altogether 69,105,92 voters comprising of 35,544,60 males, 33,559,52 females and 180 third gender voters will cast their votes in 8,992 polling stations in this phase. Cachar DC Laya Madduri said all polling personnel have left for their poling stations. “We are expecting high voter turnout as we have done extensive voter awareness campaign,” Hailakandi deputy commissioner Keerthi Jalli said.

In Manipur, 11 candidates, including four Independents, are in the fray for Inner Manipur Lok Sabha seat.

There will be 78 all-women polling stations.