The members of several employees' unions and the workers/employees of the Cachar Paper Mill on Thursday staged a protest with the body of a mill worker in front of the mill, demanding compensation to the deceased's family members. 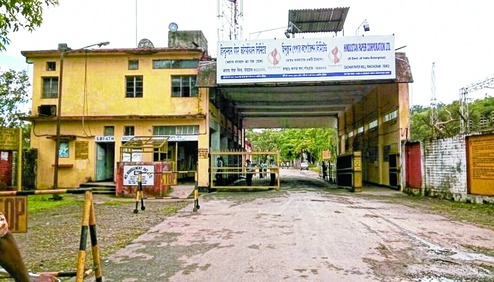 Silchar: The members of several employees' unions and the workers/employees of the Cachar Paper Mill on Thursday staged a protest with the body of a mill worker in front of the mill, demanding compensation to the deceased's family members.

The deceased, Nur Uddin, 56, who passed away on Thursday morning, had not received his salary for the past one and a half years.

He was a resident of Kanchanpur North (or Uttar Kanchanpur) village in Hailakandi district and is survived by his wife, two sons and three daughters.

The mill workers said Nur's health deteriorated suddenly on Thursday morning. The doctors at the hospital he was taken to declared him brought dead. The cause of the death is yet to be ascertained.

The union members and the mill workers/employees converged near the mill around 9.40am and demanded compensation for Nur's family members. The body was kept on the spot.

Cachar Paper Mill is located at Panchgram, around 24km from here and 291km from Guwahati.

The workers raised slogans of "Modi government murdabaad", "Modiji haay haay" and "Modiji sharam karo", expressing their fury over the Centre's inability in paying the pending salaries and reviving the mill.

Manabendra Chakraborty, the president of the Cachar Paper Project Workers' Union, said Nur died because of government negligence. "Nur died because of mental agony and pressure," he said. "Eighteen employees of the mill, including Nur, have died in the past 18 months, but the government is still oblivious to their plight."

Ajijur Rahman, the general secretary of Independent Union, said the condition of the mill workers has become "unimaginable" because of financial crunch.

He claimed that Nur's health had deteriorated in the recent past because of stress over financial problems and this resulted in his untimely death.

The demonstration concluded around 1.45pm after an interaction between the union members and the mill management, which agreed to pay compensation.

An executive magistrate of the Hailakandi administration, R. Changlong, also assured them that the district administration would take up the matter.

The body was thereafter taken to his native place (Kanchanpur North) for last rites.

North Karimganj MLA Kamalakhya Dey Purkayastha said the condition of the mill workers is worsening with every passing day but the government is not bothered at all. "The government is completely responsible for Nur's death. More such unpleasant incidents will happen if the pending salaries are not paid."

Silchar MLA and Deputy Speaker Dilip Kumar Paul said he was not aware, when asked about the latest status related to the payment of salaries and revival of the mill.

Assam BJP spokesperson Rajdeep Roy told The Telegraph that the matter of payment of dues is being processed and some amount of the pending salaries would be cleared very soon.