The rally saw a massive turnout, with shops and business establishments remaining shut for the two-hour duration. The rally also received support from 10 of the 15 districts 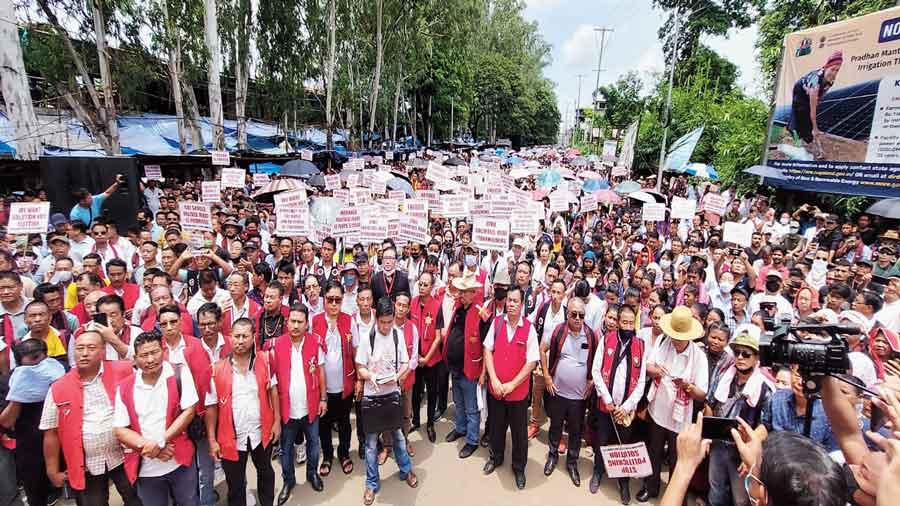 A public rally in Dimapur, the commercial hub of Nagaland, on Friday urged Prime Minister Narendra Modi to find an early solution to the Naga political issue because the “unending political process” had “adversely affected” the lives of each individual in the state.

The delay has also “taken a huge toll on the entire system of governance” in Nagaland, a two-page memorandum submitted by the Nagaland People’s Action Committee (NPAC), the organiser of the rally, said.

The rally saw a massive turnout, with shops and business establishments remaining shut for the two-hour duration. The rally also received support from 10 of the 15 districts.While the speakers at the rally called for an early solution, significant number of participants were seen carrying placards with slogans such as “No peace no progress”; “Enough is enough”; “Indo-Naga political issue is people’s issue”; “Stop politicking solution”; and “Democracy is of the people, for the people and by the people”.

The NPAC was formed by tribal Hohos and civil society organisations on June 21 at a meeting initiated by the influential Nagaland Gaon Bura Federation (NGBF) in Dimapur to represent the “voice of the people” on the Naga political issue and “conveying” this voice to the authorities for an early and lasting solution.

Seeking a positive and early action from Modi, the public representation submitted by the NPAC stated that the “unresolved political issue has heralded in unimaginable cycle of corruption at all levels, crippling public health care, education and overall infrastructure developments which are in shambles for obvious reasons to say the least”.

The representation added: “Unresolved Naga issue has produced countless scoundrels and thieves and in the name of political issue, threats and intimidations have stifled the growth of a perceived Naga society, which you assured, would be a vibrant one.”The representation informed Modi that the “economic well-being” of Naga family has “completely collapsed in the absence of equitable welfare formula and governance save on paper, the consequences is frightening to say the least.

“Private businesses are grossly extorted by armed groups. Without a political settlement, we foresee thousands of futureless fresh, youthful, highly qualified angry men and women taking up guns to challenge those stifling their growth and progress. Your promise to the Nagas has not been fulfilled as yet. Prime minister Sir, is it not a betrayal to our people, considering that negotiations with Naga groups have officially concluded?” the representation said.

It then reminded the PM about the “Election for Solution” promise of the BJP before the 2018 Assembly polls but participants said there was no sign of solution before the 2023 polls.The government and the Naga groups have claimed the talks concluded in October 2019Theja Therieh, convener of the rally and a leading social activist, told The Telegraph that the objective of the rally was to send a message to the Centre about what the people felt about the inordinate delay.

“If the talks have concluded then why the delay in announcing the solution? The central government started the peace process and they should close it. If they cannot close it then they should call it off. Let the people decide what they want,” Theja said.

Theja, also the media convener of the Nagaland Tribes Council, added: “Talks have been on for 25 years. People are suffering under ceasefire. It has taken a toll on everyone. There is extortion and intimidation. We are feeding 16 political groups (underground groups). There is no governance at all. This is why we want an early solution. This is what we have conveyed to the PM.”

The peace process to end one of Southeast Asia’s longest-running insurgency started with the ceasefire involving NSCN (I-M) in 1997 and the signing of the Framework Agreement in 2015 to pave the way for an early solution. But all efforts seemed to have hit a roadblock over the issue of separate Naga flag and constitution.The National Socialist Council of Nagalim (Isak-Muivah), the key player in the peace process, has said it is unthinkable for the organisation to accept the Naga national flag as a cultural flag as hinted by the central government because it symbolises Nagas’ political identity and was non-negotiable.