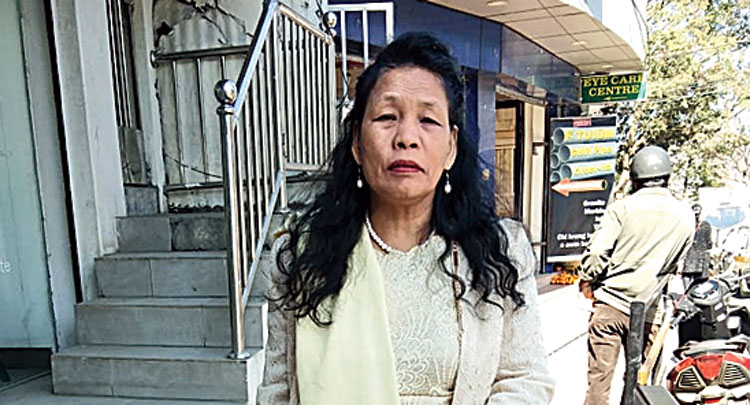 The 2019 Lok Sabha elections will see a woman contest Mizoram’s lone parliamentary constituency for the first time since it elected its first MP in 1972.

Lalthlamuani, a 63-year-old Mizo Jewish leader, who filed her papers as an Independent on Monday, became the first woman from Mizoram to contest the Lok Sabha polls after her candidature was accepted on the last date of withdrawal on Thursday. She will be contesting against five male rivals.

Lalthlamuani is, however, not in politics for power or name. She believes that politics, considered “dirty” by many, is one of the best opportunities to serve the “Lord” and the people. She told The Telegraph that she received a “divine call” to contest the polls to save the identity of the Mizo Jewish community and the Mizo community as a whole. “I was told by the Lord to contest the polls to champion the lost tribe of Israel in India’s Parliament. I want to uplift the status of women and to make the Almighty God happy with our nation,” she said.

Lalthlamuani’s main poll agenda is to pursue a memorandum submitted to the United Nations, seeking recognition of the Mizo Jewish community as the lost tribe of Israel. “I will also work for strengthening India-Israel ties to enable Mizos to visit the holy land and for farmers, if elected to the Lok Sabha,” she added.

Lalthlamuani, vice-president of Chhinlung Israel People’s Convention, a group working for the unity of Mizo Jewish community living in different parts of the country, Myanmar and Bangladesh, said she hoped to garner the votes of women and people who believe in Israeli origin and Jesus. She, however, doesn’t go out to campaign. “If God showers his blessing, I will surely win,” the class X pass said.

Expressing concern over the poor participation of women in politics in the state, she said the misconception that politics was a “male bastion” could be the reason.

“Mizo women are yet to gain interest in politics. I believe it is high time women played a significant part in politics with the conviction that it is one of the best ways to serve God. My candidature will put a big challenge before women,” she said.

In Mizoram’s patriarchal society, the participation of women in politics is still minimal despite a high literacy rate and women playing key roles in almost all walks of life. Of the 209 candidates in the Assembly elections held last year, only 16 were women and none won the polls. The state has seen only two women ministers in 32 years — Lalhlimpuii of Mizo National Front, who was elected in 1987, and Vanlalawmpuii Chawngthu, who was inducted in the erstwhile Congress government cabinet in 2014.

Mizoram, which has an electorate of 784,405, goes to the polls on April 11. Ironically, female voters outnumber their male counterparts by 20,417.

Mizoram had elected its first MP, Sangliana of the Mizo Union, to the fifth Lok Sabha when it became a Union Territory on January 21, 1972. It attained statehood on February 20, 1987.

Six candidates are in the fray for Mizoram’s lone Lok Sabha seat. The ruling Mizo National Front has fielded former Doordarshan director-general C. Lalrosanga, the Zoram People’s Movement (ZPM)-Congress combine is supporting sport journalist Lalnghinglova Hmar, the BJP has fielded its state vice-president Nirupam Chakma and the candidate for People’s Representation for Identity and Status of Mizoram is former sailor T.B.C. Lalvenchhunga. Lalhriatrenga Chhangte, who had filed a criminal case against former chief minister and state Congress president Lal Thanhawla, is also contesting as an Independent.