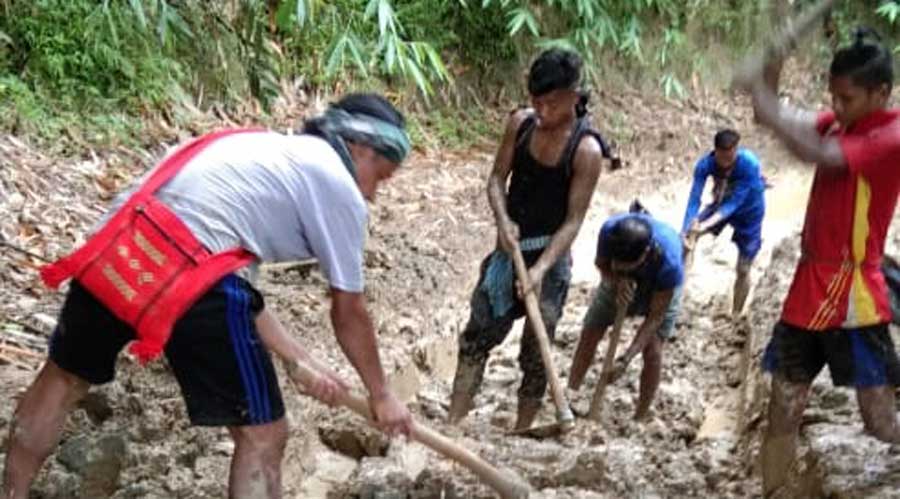 Four villages located along the India-Bangladesh border on Sunday clarified that they have no intention to go with the neighbouring country, while reaffirming their faith in the Constitution.

Last week, in a press statement, Kynjaimon Amse, spokesperson of Huroi, Hingaria, Lahalein and Lejri villages, had informed that the villages had resolved that if the government of India was not willing to construct a proper road, it would be better if these villages were handed over to the neighbouring country.

At the same time, Amse had said the villages would write to the Bangladesh government for construction of the dilapidated road.

Days before the press statement was issued, villagers from Hingaria, Huroi, Lahalein and Lejri had come out to give some shape to the deplorable and muddy Rymbai-Bataw-Borkhat-Sonapur road, which is around 70km long, to facilitate the movement of 4x4 vehicles.

These villages, which have a population of more than 5,000, are located close to Bangladesh, and fall under the Lumshnong police station in East Jaiñtia Hills district. These areas are more than 185km away from Shillong.

After the press statement was issued, Meghalaya deputy chief minister Prestone Tynsong said the government was taking the matter of constructing the road “seriously”.

The district administration of East Jaiñtia Hills, along with the police, had also met Amse and others in Khliehriat, about 90 km from here.

On Sunday, Raja Suchen, who is the secretary of Huroi village, said the four villages have welcomed Tynsong’s statement.

Suchen said the statement was sent on behalf of all the four villages.

“The government through the district administration and the district police has assured  that the grievances of the villages will be rigorously pursued for speedy redressal particularly with regard to the road and mobile connectivity problem,” Suchen said.

He clarified that with regard to the press statement last week, the intention was only “to draw the attention of the government” to the problems of the rural border population which has affected their livelihood.

“We only wanted to express the problems of the people and wish the government to listen to our grievances. We wish to clarify that the people has no intention or desire to go to Bangladesh and that we affirm our allegiance to the government and Constitution of India,” he said.

“There is no doubt that our people have full allegiance to the government and that our intention should not be construed wrongly as we only seek development for our people. We also wish to thank many NGOs who have raised this issue of road problems and solicit everyone’s support so as to ensure that we get the road project and also other basic needs.”

He also said the people welcome the visit of the district administration and police to the villages as they feel hopeful and connected with the government.

In the weeks to come, he said the villagers will meet chief minister Conrad K. Sangma and deputy chief minister Prestone Tynsong to highlight the problems of the villages which have crippled the life of the people.