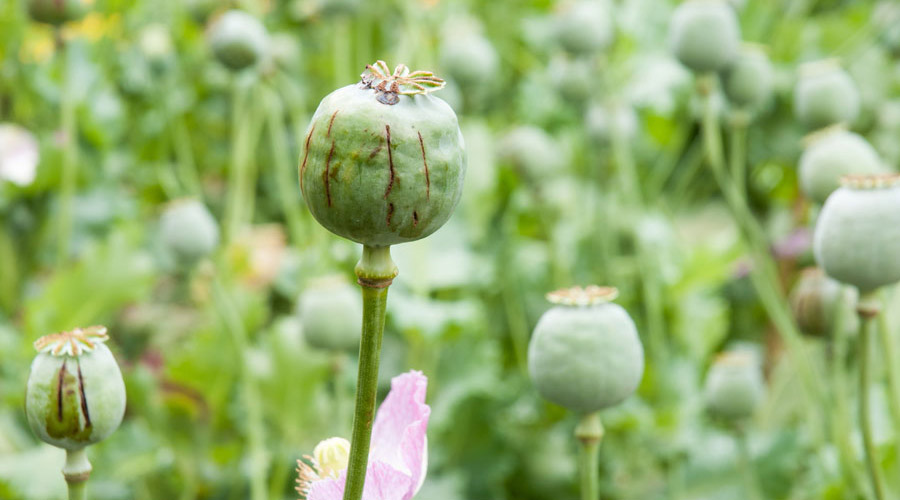 Poppy plants are used to produce opium, from which drugs such as heroin and morphine are produced.
Representational picture
Umanand Jaiswal   |   Guwahati   |   Published 18.01.23, 02:45 AM

Manipur has scaled up its war on drugs by going all out against poppy growers in the state.

The state’s food and public distribution department minister L. Susindro Meitei told The Telegraph on Monday that the government has initiated steps for suspension and subsequent cancellation of ration cards of those involved in poppy cultivation.

Poppy plants are used to produce opium, from which drugs such as heroin and morphine are produced.

“We formally moved the Union food and public distribution  minister Piyush Goyal ji on Monday about our government’s resolve to end poppy cultivation, which is banned in Manipur.

“We have informed him that we are considering the suspension of benefits under the National Food Security Act (NFSA) to poppy cultivating villages to deter people from cultivating poppy which may be extended further to completely taking such villages out of the purview/consideration under the NFSA,” Meitei said.

The NFSA is an act passed by the Parliament providing for food and nutritional security by ensuring access to food at affordable prices, including subsidised food grains under the public distribution system that can be availed by those having ration cards.

The state government identifies the beneficiaries and also issues ration cards to them. The minister said besides suspending ration cards, the government is also hiring a chopper from a Delhi-based private company to spray herbicide to destroy poppy fields.

“Our government, led by chief minister Biren Singh ji, is firm on ending the drug menace. We decided to hire the chopper because the area under poppy cultivation was huge. It will take a long time to destroy it by drones and manually because some areas are very difficult to reach. The chopper will be deployed within 10 days, first for 48 hours, and then extended if required,” Meitei said.

The twin moves were triggered after an aerial survey undertaken by Meitei on Friday as part of the state’s BJP government’s war on drugs.

The aerial survey revealed poppy cultivation in at least 36 villages spread across three Manipur districts — Kangpokpi, Chandel and Churachandpur — despite the BJP-led government’s “repeated appeal” to stop poppy cultivation.   Poppy is cultivated because of its high return.

Poppy cultivation has increased with time in the remote hilly areas of Manipur and found an easy market in neighbouring Myanmar, reportedly the world’s second-largest producer of opium.

The war against drugs was launched by the Biren Singh government in its first term and has intensified since he got a second straight term last year.