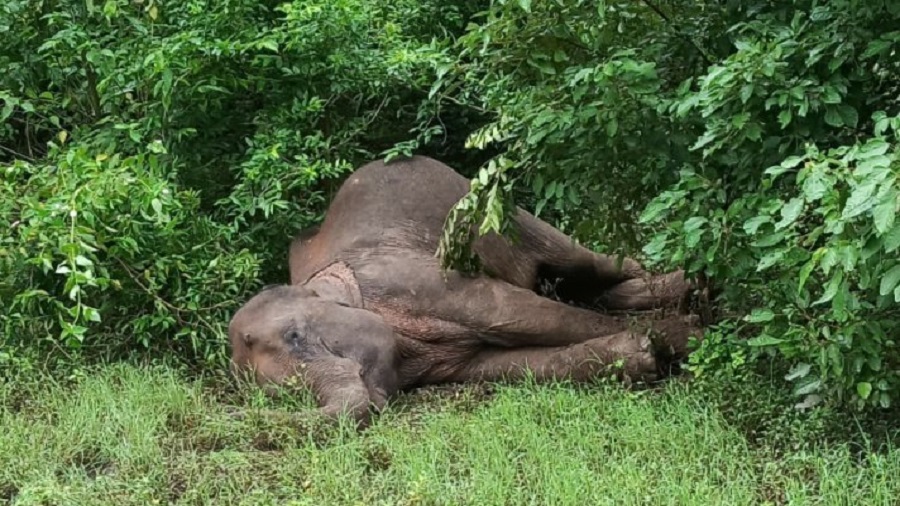 Anthrax is a spore-forming bacteria, leading to fatality within six to 12 hours in animals. It also affects humans, causing high fever, skin infection and digestive problems but can be cured with timely intervention, a veterinarian said.
File picture
Umanand Jaiswal   |   Guwahati   |   Published 10.12.20, 01:10 AM

The death of two female elephants due to anthrax in Upper Assam’s Dehing Patkai Wildlife Sanctuary has prompted the state government to launch a vaccination drive within a 5km radius from where the carcasses were found to “save” the nearby livestock as well as the wildlife from getting affected.

The promptness with which the vaccination drive is being launched has a lot to do with the experience of the anthrax outbreak in Odisha’s Simlipal Tiger Reserve in 2016.

Dibrugarh divisional forest officer Pradipta Baruah told The Telegraph that the vaccination drive will be launched either on Thursday or Friday.

“Around 3,000 vaccine doses are being rushed from Guwahati. We recommended the vaccination drive as soon as we suspected anthrax to be the cause of deaths. We received the confirmation report from Guwahati on Tuesday,” Baruah said.

Anthrax is a spore-forming bacteria, leading to fatality within six to 12 hours in animals. It also affects humans, causing high fever, skin infection and digestive problems but can be cured with timely intervention, a veterinarian said.

“I was with the WTI in Odisha from 2015 to 2019. It took us three years to find the source. We also went for strict preventive measures. Around 18 elephants died of anthrax in the tiger reserve. When I shared my Odisha experience, the Dibrugarh district administration and the forest department reacted promptly to prevent a repeat and put in place several preventive measures,” Changmai said.

He was part of the team that carried out the post-mortem of the two elephants which died under the Joypur range of the Dehing Patkai Wildlife Sanctuary. “It is very important to find the source of infection and take all possible preventive measures to check the spread,” Changmai said.

There are around 200 elephants in the forest and around 35 in the affected area.

The elephant which died on December 3 in the Tarajan area was around 8 to 10 years old and the one that died at Namsang on December 5 was aged between 18 and 20 years.

The forest department burnt the carcasses of the two elephants and then fenced an area of 20 metres at both the sites so that other animals cannot come near them and get infected. The carcasses cannot be buried because the anthrax bacteria can become “active even after 10 years” if it is not killed. Therefore, according to revised forest ministry standard operating procedure, the carcasses were burnt.

“Besides fencing an area of around 20m where the carcasses were burnt, a 50m area around the two sites has been also disinfected with 10 per cent formalin to check the spread. The authorities will also launch an awareness drive in human habitations in the vicinity of the affected area to prevent its spread,” Changmai said.