At present, only a few states are governed by non-BJP parties and days are not far when the BJP will govern these states too: Manik 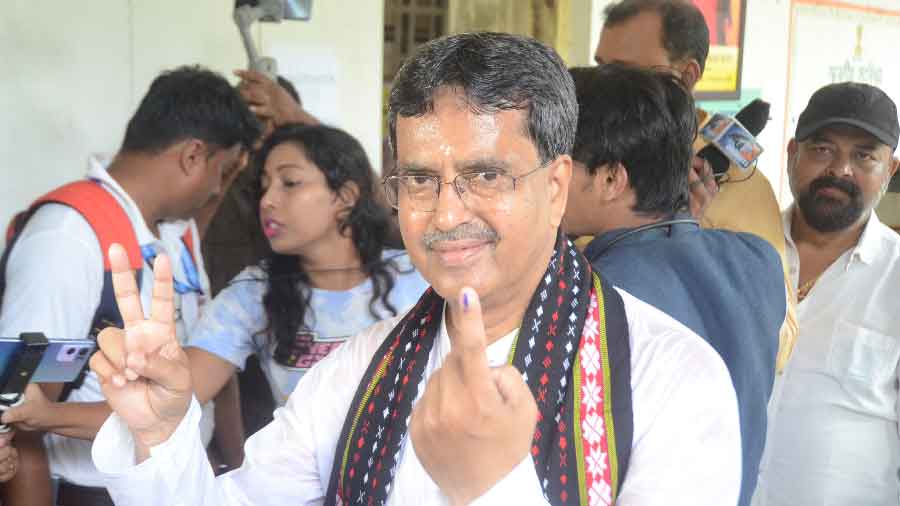 On Prime Minister Narendra Modi's watch, no one will go scot-free after committing corruption, Tripura Chief Minister Manik Saha said on Friday, attacking the Trinamul Congress after crores of rupees were found at properties linked to its now-suspended leader Partha Chatterjee.

Addressing a programme, Saha asserted that the detection of huge amounts of cash and gold was possible because of Prime Minister Narendra Modi and Union Home Minister Amit Shah.

"We are accustomed to see counting of votes but now counting of cash is taken up in a state and nobody knows when it will end. Now, everything is coming out," he said.

"This has been possible because of PM Modi and Shah. Modi means corruption-free governance. In the Modi era, no one will have a free run after committing corruption," he said.

At present, only a few states are governed by non-BJP parties and days are not far when the BJP will govern these states too, Saha claimed.

Taking on the TMC, he said, "If a driver is honest, the co-passengers are bound to be clean and transparent. We are forced to follow the transparent path shown by PM Modi."

Saha's comments come amid hectic efforts by the TMC since the last year to make inroads into Tripura, which has a sizeable Bengali population. However, the party has not been able to make much of an impact in the Northeastern state.

Chatterjee, the former education minister of West Bengal, was arrested by the Enforcement Directorate in school jobs recruitment scam after stacks of cash, and gold believed to be in kilograms were seized from the apartments of his aide Arpita Mukherjee.

Chief Minister Saha also lauded Modi for taking the initiative to build toilets, and vaccinating crores of people in a short time.

He said many people mocked the prime minister when he spoke about building toilets in his first address from Red Fort in 2014. "Now, people have understood the importance of Swachh Bharat Abhiyan. Under his guidance, COVID vaccines were developed within the shortest period of time -- six to eight months. His long-sighted and path-breaking thinking are acknowledged by the world.