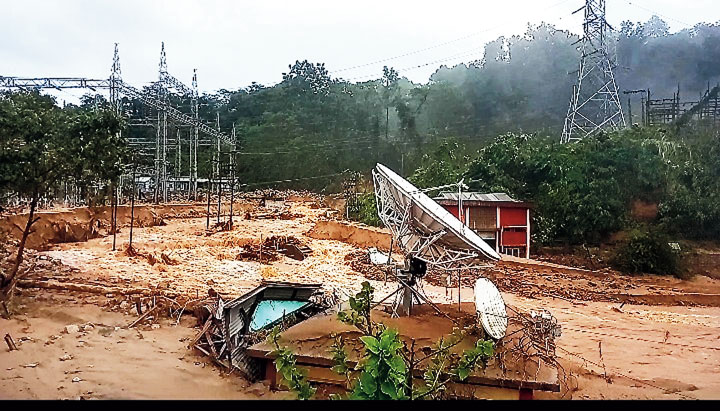 The water level of the Umrong reservoir is yet to recede, more than 72 hours after releasing water from three gates of the North Eastern Electric Power Corporation Ltd (Neepco) dam.

Four Neepco officials, Joysing Tisso, Robert John Ngamlai, Prempal Balmiki and Raju Reddy, who were trapped inside the reservoir ‘s pump house remain untraced as the water level has not receded yet.

A pipeline burst at the Kopili hydro power station at 29 Kilo in Umrangsu in Assam’s Dima Hasao district around 4am on Monday had led to massive flooding and created a water fountain that rose several hundred feet into the sky. Altogether 800m of the project area was effected.

The pipeline carries water at 12,000 litres/second from the Neepco’s Umrong reservoir to the project site.

The flooding submerged several office buildings, damaged more than 90 per cent of the project machinery and washed away the approach bridge to the project area.

Neepco’s general manager Debatosh Bhattacharjee said, “We are trying our best and hope that the water level will recede in two to three days. Our priority is to rescue the trapped persons and restore the system as soon as possible. As soon as the water pressure comes down, we will close the door of the tunnel and start the rescue operations. We have mobilised a team of SDRF and NDRF personnel for emergency action.”

Sources said the pipeline was repaired by experts at a cost of Rs 50 crore in 2018 and the blast took place on the repaired portion.

A high-level team from New Delhi, including the chief managing director, Vinod Kumar Singh, visited the site to assess the cause of the blast.

The CMD told reporters that the acidity of the water from rat-hole coal mining from the source of the river (Meghalaya) affected the pipeline and damaged it.

The family members of Ngamlai, a junior engineer, alleged that the blast was caused due to the negligence of the authorities. “My brother is stuck there inside the pump house. We don’t know his condition. The authorities are working at a snail’s pace and not taking the matter seriously,” Charlis Ngamlai said.

Tisso, an engineer, is due to retire on October 31. He and Ngamlai are both residents of Umrangsu. A rescue team from Hojai had to leave as the water levels showed no signs of receding.

A police source said, “We doubt the deluge washed the missing persons away. A Neepco team is on the site but this is not the time to carry out rescue operations as the water level is very high.”

Dima Hasao deputy commissioner A. Rajkhowa said on Thursday, “Neepco can restart work only after the water level goes down.” He said a team, led by assistant commissioner S. Teron, will assist Neepco. “There is no habitation on the site and nobody will face any problem from the pipeline burst. I visited the site several times after the incident,” he added.

Gorlosa, North Cachar Hills Autonomous Council executive member Golonjo Thaosen and council member Ratan Jarambusa visited the site on Wednesday. Gorlosa tweeted that he would pressurise the Union and state governments to look into the matter and compensate the loss incurred by the people.

All Assam Students’ Union (AASU) president Dipanka Kumar Nath said on Thursday, “The Centre, Assam government and Neepco authorities are responsible for the Kopili incident. The government should take lessons from it and stop construction of all big dams in the Northeast.”

The AASU questioned what would happen in the downstream areas if a similar incident occurred at the 2,000MW Lower Subansiri project, under construction at Gerukamukh on the Assam-Arunachal Pradesh border.

AASU general secretary Lurinjyoti Gogoi said, “They did not even taken measures to stop the gushing water after the incident and rescue the four missing persons. We have not seen a delegation of ministers either from the Centre or the state government visit the incident site.”

Citing the devastation caused by the release of water from Ranganadi hydroelectric power project in Arunachal Pradesh, Kurishu dam in Bhutan and the Kopili project, he said it would help people understand the risk involved in Lower Subansiri project. AASU adviser Samujjal Bhattacharjya demanded that the governments stop constructing big dams in the Northeast.