The maximum amount paid to an individual on Friday was Rs 35,000 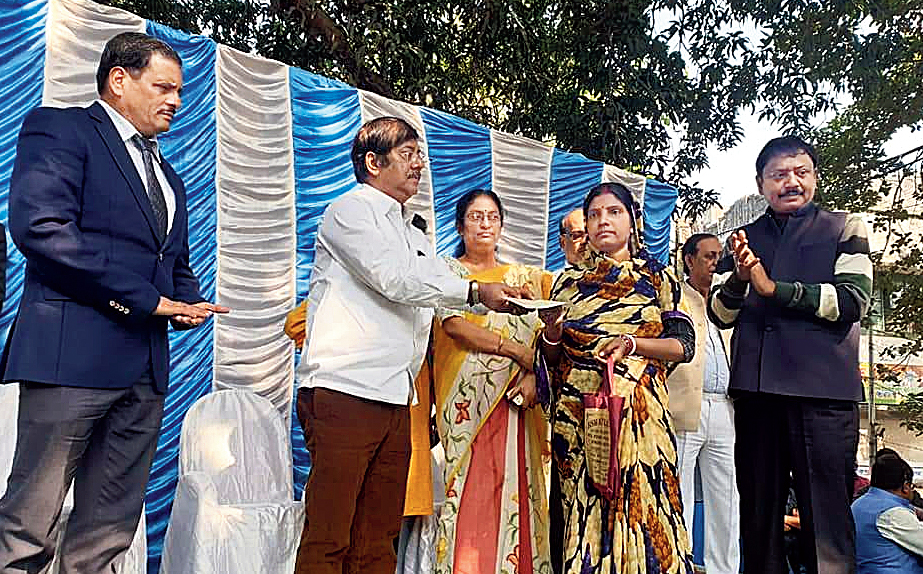 Minister Jyotipriya Mullick hands over a cheque to a woman at Naihati on Friday.
Picture by Pranab Biswas
Subhasish Chaudhuri   |   Naihati   |   Published 17.01.20, 07:53 PM

The Bengal government on Friday handed over compensation to 65 families whose homes had suffered damage in a deadly blast during the disposal of firecrackers by police in Naihati’s Ramghat last week.

North 24-Parganas district magistrate Chaitali Chakraborty said Rs 12 lakh was disbursed among the families on the basis of an assessment conducted by the administration.

The maximum amount paid to an individual on Friday was Rs 35,000.

Several houses had been damaged in the January 9 explosion. The bomb disposal squad was defusing firecrackers seized from illegal units at Devok village. On January 3, five persons had been killed in an explosion at an illegal cracker manufacturing unit at Devok.

The police claimed that Devok had over 200 illegal cracker manufacturing units. It is suspected that the blast had occurred when crude bombs seized in earlier raids had got mixed up with the firecrackers.

The January 9 blast had damaged several houses near Ramghat as well those in Hooghly’s Chinsurah, situated across the Hooghly river.

Food and supplies minister Jyotipriya Mullick, who was present during the delivery of compensation cheques in Naihati on Friday, said: “The chief minister had promised to give support for repairs. She managed to ensure cheques to the victims within eight days of the accident.”

Chakraborty said: “Inquiry is on in a few cases and more families, too, will be paid soon.”

Senior police officers said the administration was trying to arrange alternative means of livelihood for those working at the illegal cracker manufacturing units at Devok. Barrackpore police commissioner Manoj Kumar Verma had conceived the idea of the alternative livelihood.