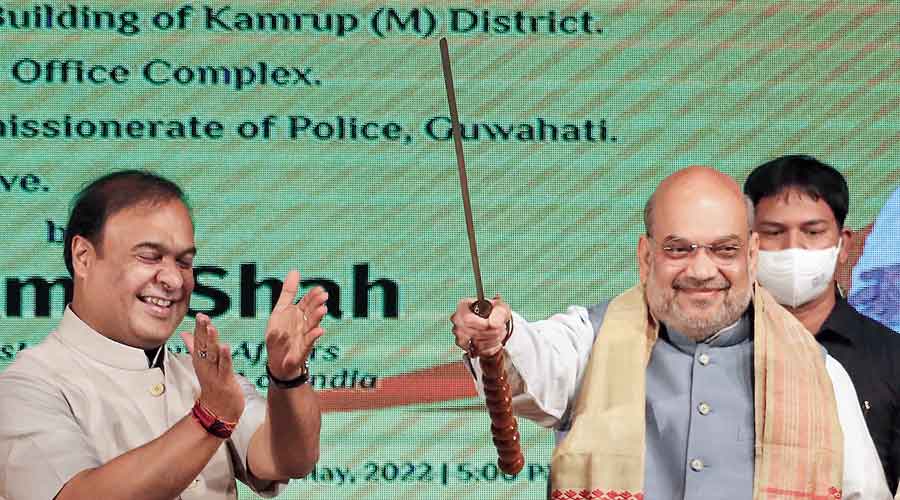 Amit Shah with a ‘hengdang’ sword at Sankaradev Kalakshetra in Guwahati at the foundation stone laying event for projects on Tuesday.
PTI
Umanand Jaiswal   |   Guwahati   |   Published 12.05.22, 01:25 AM

Union home minister Amit Shah on Tuesday accused the Bengal government of not supporting the Centre’s efforts to check infiltration from Bangladesh while praising the Assam government for its role in curbing influx.

Shah compared the efforts of the two neighbouring states sharing border with Bangladesh at a massive rally organised in Guwahati to mark the first anniversary of the BJP-led government in Assam under chief minister Himanta Biswa Sarma.

This is the second time in less than a week that Shah has attacked Mamata Banerjee’s government on the issue of infiltration.

During his visit to Bengal last week, Shah had alleged that the Bengal government was not doing enough to check influx and smuggling from Bangladesh. In her response, Bengal chief minister Mamata Banerjee said it was Shah’s duty as the Union home minister to check influx.

What Shah said in Hindi would read something like this in English: “ Friends, I am looking at both states — Bengal and Assam — where the Centre is trying to check infiltration. But in Bengal we don’t get any support, we don’t get much success. Assam government has been standing like a mountain against infiltration, supporting the Indian government for which we have been able to taste success along Assam’s border in checking infiltration.”

Shah also said the joint efforts of Centre and the Assam government has seen a sharp fall in infiltration besides cattle smuggling.

Influx has been a very sensitive issue in Assam which saw a six-year-long agitation (Assam movement 1979-85) against foreigners illegally entering and staying in Assam.

The Indo-Bangladesh border is about 4,096km of which Bengal share 2,217km and Assam 263. Tripura (856km), Mizoram (318km) and Meghalaya (443) are the other states in the Northeast which share border with Bangladesh.

The home minister had on Monday visited Mancachar border outpost on the Indo-Bangladesh border in Assam and reviewed security arrangements and the comprehensive integrated border management system, a virtual fencing helping the Border Security Force that guards the border with Bangladesh in detecting and controlling the cross-border infiltration, smuggling, human trafficking and cross-border terrorism.

Chief minister Sarma has pulled out all the stops to ensure that the wave of all-round growth sweeps across Assam in the past one year.

The state government has worked towards “securing the interests of indigenous people, “cracked down hard on crime and ensured social security through welfare schemes.”

“We will hand over appointment letters to 25,000 youth on May 14. Our mantra is minimum government and maximum governance,” Sarma said, thanking Shah and Prime Minister Narendra Modi for their blessings and guidance. “While acknowledging people’s support, I promise that our government shall leave no stone unturned to accelerate growth and transform Assam into a state of our dreams,” Sarma said.