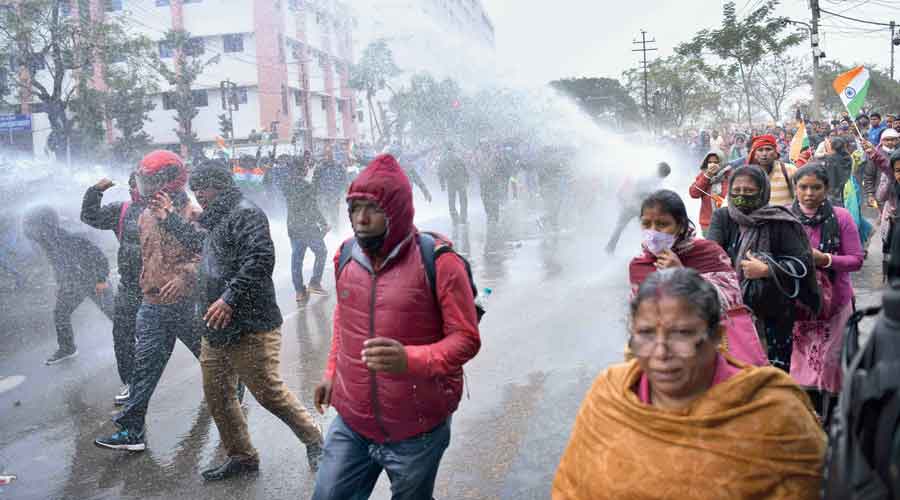 Seventy teachers and 17 policemen were injured in Tripura’s capital Agartala early on Wednesday during a police crackdown on terminated schoolteachers holding a peaceful demonstration for the past 52 days seeking permanent jobs.

Altogether 10,323 teachers were terminated in 2017 after the Supreme Court upheld a Tripura High Court order of 2014 because of a faulty recruitment process. The teachers were employed in ad hoc posts till March 2020 and since been rendered jobless.

The police action was launched near the Agartala City Centre where the terminated teachers are on a sit-in for the past 52 days under the banner of Joint Movement Committee of 10323.

Altogether 223 teachers were detained and later released. Two FIRs have also been registered against those indulging in violence, an official said.

A well-equipped police and Tripura State Rifles team reached the site at around 4am and the area was vacated around 5.30am by clearing the makeshift dharna site and detaining over 300 teachers because of imposition of prohibitory orders, the teachers alleged. On Tuesday evening the teachers had taken out a torchlight rally.

Satyajit Dey, a committee member, told The Telegraph that they were taken aback by the early morning “shocking and surprising” police action against the peaceful protesters.

“Over 125 of our members have been injured, of whom 55 have been hospitalised. Around 425 have been arrested. What is our fault? We were asking the BJP-led government to fulfil the pre-poll promises made by it to permanently rehabilitate us. They forcibly vacated the site and detained us today. Later during our march they resorted to lathicharge, tear gas and water cannons,” he said.

Dey added: “What has happened is very unfortunate and shameful. The chief minister had assured us in September that a solution to our problem will be found in two months. After nothing happened, we formed the JMC and launched the indefinite protest. We will meet and decide our next course of action but our protest will continue.”

There were also social media posts suggesting the protest will become more aggressive, he added.

“We did not use force in the morning, gave them time to vacate. Force was used during the march to the chief minister’s residence. Those in the protest march created trouble. Policemen suffered injuries because of stone pelting while the protesters were hurt in the lathicharge. Altogether 87 people were injured but these are minor injuries. Prohibitory orders have been extended by 24 hours,” Yadav said on Wednesday evening.

The Opposition Left and Congress condemned the BJP-led government for the crackdown, saying the ruling dispensation had allegedly betrayed the teachers after assuming power. The ruling BJP alleged that a section of the terminated teachers indulged in clashes under the influence of the CPM.