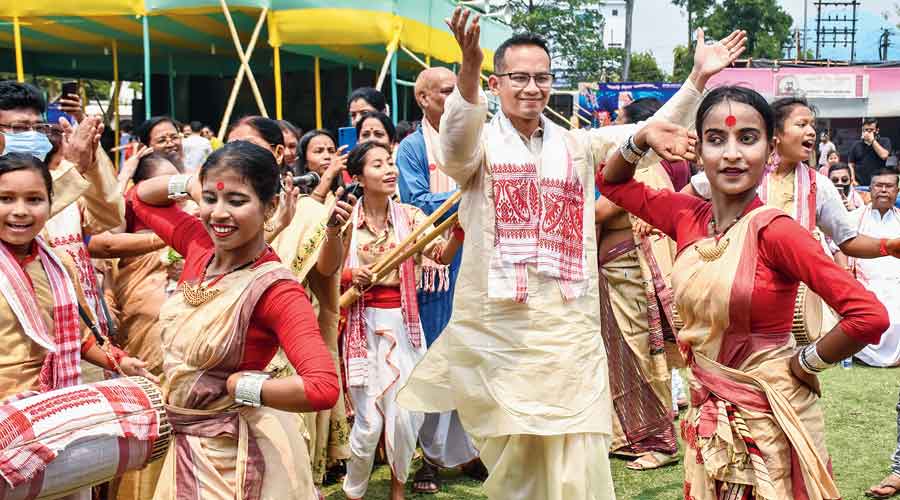 Coronavirus cases are rising in Assam but officials involved in the management of the pandemic in the state have ruled out the possibility of a lockdown to contain its spread while neighbouring Arunachal Pradesh and Nagaland planned to involve religious and community leaders to curb the disease.

“Over 500 cases are being detected daily in Assam but this is because we are testing more — about 1 lakh per day since April 12, a positivity rate of about 0.06 per cent. It would have been worrying had we tested 5,000 a day. The situation in the Northeast is not as worrisome as elsewhere in the country. It is still considered a green zone but we need to strictly implement the safety protocols. This will happen after the Bihu holidays,” one of the officials said.

Bihu festivities got under way on Wednesday amid tight safety protocols and fears of a surge in Covid cases.

Assam on Tuesday recorded 590 positive cases, taking the number of active cases to 2,924, mostly people with travel history. The death toll since the outbreak last year has risen to 1,119 till Tuesday, prompting the government to make rapid antigen and RT-PCR tests mandatory upon arrival at any airport in the state.

A health department notification said a passenger will have to undergo an RT-PCR test upon arrival if the free rapid antigen test comes positive by paying the government approved rate of Rs 500.

Officials said all possible efforts will be made after Bihu to strictly implement the Covid safety protocols like wearing masks and maintaining distance by dealing strictly with violators, including imposing fines and regulating public and private gatherings.

They admitted there was laxity in implementation of the safety protocols during back-to-back BTC and Assembly polls.

“When there was a fine (for violation of protocols), compliance was better. It got hit during the elections but we are once again toning up everything to contain the spread. The vaccination drive will also normalise in the next 10-15 days but there are no issues with the second dose. As far as the lockdown is concerned, we are not thinking about it at the moment. Assam will be the last state to impose a lockdown going by the present trend but things will hopefully not come to such a pass. We are waiting for the Bihu festivities to get over,” one of them said.

In neighbouring Arunachal Pradesh, governor Brig. (retd) B.D. Mishra held a videoconference on Wednesday with religious leaders, urging them to participate in the fight against pandemic.

Mishra urged the leaders to advise the people in observing SOPs (standard operating procedures), that is, putting on face masks, maintaining social distancing, frequent washing of hands, avoiding mass gatherings and motivating the eligible members of their fold to get vaccinated at the earliest.

Mishra stressed that the enforcement of SOPs should not be left to the district administrations, police personnel or the state government.

The day also saw Nagaland governor R.N. Ravi hold a sensitisation-cum-consultation meeting with all the tribal hoho leaders, recalling their significant contributions and cooperation to the state government in combating the first wave of Covid-19.

The governor appreciated the valuable practical suggestions given by the tribal leaders based on their experiences and observations. “The suggestions will be conveyed to the state government for necessary action,” he said.