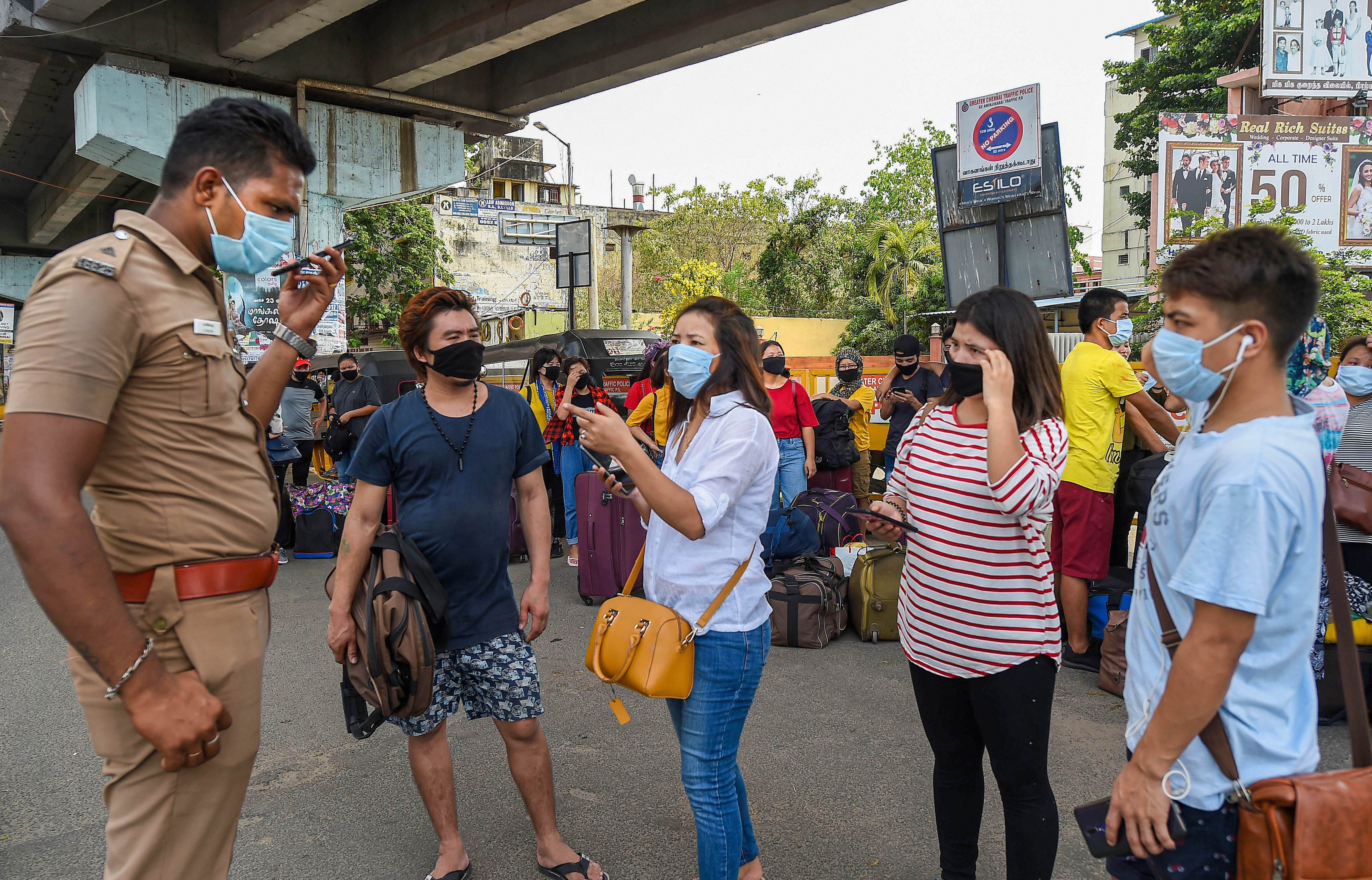 A policeman interacts with migrant workers from Manipur as they walk along the Poonamallee High Road to reach Chennai Central Railway station for going to their homes, amid ongoing COVID-19 lockdown in Chennai on May 10, 2020.
(PTI)
Brozendra Ningomba   |   Imphal   |   Published 13.05.20, 10:07 PM

A special train that left Central railway station of Chennai on Sunday night ferrying 1,140 Manipuri residents who were stuck in different parts of Tamil Nadu, arrived at Jiribam railway station on Wednesday morning.

As a large number of Manipur police personnel stood in to guide the passengers to follow the systematically-organised procedures of social distancing, the 24 bogey-train pulled up at the station.

After it stopped, the passengers were instructed to pull down the shutters of the windows and not to disembark until instructed to do so.

The train was bringing passengers hailing from all 16 districts of Manipur — 24 of Bishnupur district, 23 of Chandel, 347 of Churachandpur, 73 of Imphal West, 42 of Imphal East, four of Jiribam, five of Kakching, 13 of Kamjong, 38 of Kangpokpi, 49 of Noney, three of Pherzawl, 191 of Senapati, 173 of Tamenglong, six of Tengnoupal, 14 of Thoubal and 135 of Ukhrul district.

Police and health officials first instructed the passengers of Ukhrul district to disembark and walk in line toward the screening point where doctors and health workers screened them with infrared thermal thermometer.

After providing them lunch packs, they were led to board five buses waiting to take them to Ukhrul district.

Thus all the passengers, having gone through the screening at the station, have been taken to their respective districts where they will be put under 14 days’ quarantine at district institutional quarantine centres run by the government or community quarantine centres organised by MLAs of the constituencies and deputy commissioners concerned.

Every stranded returnee should be under institutional or community quarantine for 14 days and should not adopt home quarantine, an order issued on Tuesday by principal secretary, health and family welfare, V. Vumlunmang said.