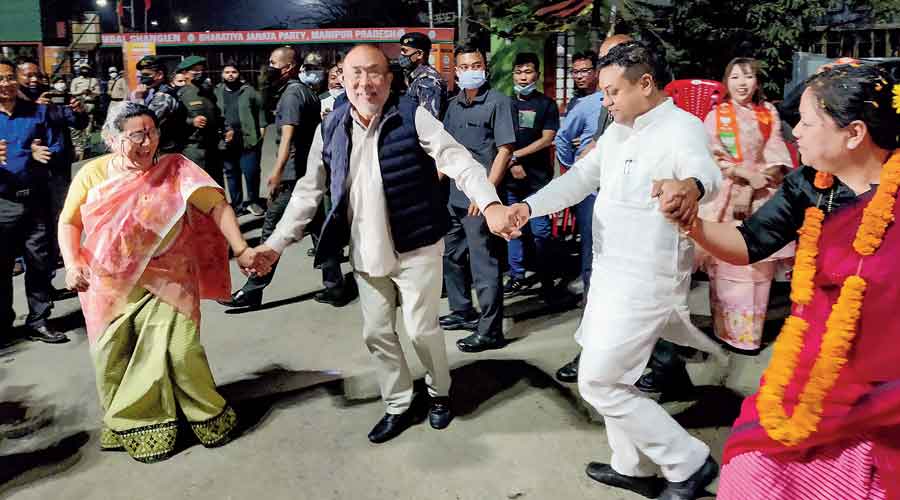 N Biren Singh and Manipur BJP chief A Sharda Devi dance in celebration after the party’s victory in the Assembly elections, in Imphal, on Thursday.
PTI Photo
Umanand Jaiswal   |   Guwahati   |   Published 12.03.22, 01:06 AM

The Opposition Congress has started picking up the pieces in Manipur following its debacle in the state Assembly polls, instructing its members to withdraw all election-related complaints and protests and instead focus its energy on rebuilding the state unit for the 2024 Lok Sabha elections.

This was the message the party sent after a meeting attended by Jairam Ramesh, election observer, AICC leaders camping in Imphal, senior state leaders and the five elected members on Thursday afternoon.

The result of the two-phase elections declared on Thursday has left the state unit shocked, more so when the public voted every other party in fray except the Congress, party insiders said.

Manipur PCC vice-president K. Devabrata Singh told The Telegraph, “We have accepted the verdict and have issued clear instruction to our party workers to stay calm, withdraw all complaints and protests immediately and focus on restructuring the party unit and see what we can do in the 2024 Lok sabha elections. We are preparing for it.”

Singh said it was the “right move” at the moment.

“We should not to create any kind of political conflict because we have been handed a clear defeat by the people. Why not accept it and start pulling up ourselves nicely. One who gets the mandate will run the government. Let us observe for some time and if the government doesn’t do well we will step in,” he said, adding the state unit is starting the process for organisational elections from March 15.

Congress’s tally fell to five from the 28 seats it had won in 2017. Moreover, the BJP won a majority on its own and even “so called smaller parties” such as the National People’s Party (7), Naga People’s Front (5), JDU (6), debutant Kuki People’s Alliance (2) performed better than the Congress which was fancying its chances of regaining power on its own or in alliance till few months ago.

But the results of the two-phase Assembly polls showed the vote share of every party which won a seat increased barring the Congress which finished joint fourth with NPP seat-wise and third in terms of vote share. The biggest gainers were NPP and JDU.

Party insiders said the verdict was clear: the public want to see change at the AICC and the state unit. “We could not address their grievances. A senior leader, Shashi Tharoor said yesterday that we need to settle our leadership issue because we rapidly losing ground,” one of them said.

This time the Congress had contested the polls under the six-party Manipur Secular Progressive Alliance (MSPA). Led by the Congress (53), the alliance included CPI (2), CPM, RSP, Forward Bloc and JD (S).

The Congress move came on a day chief minister N. Biren Singh led cabinet tendered its resignation to governor La Ganesan. Though Biren Singh, from all indications is set for a second straight term in the top post after the BJP (32) won a majority on its own in the 60-member, central BJP leaders are assessing the situation by taking the views of state leaders and elected members before the final announcement is made by the parliamentary board.

The Naga People’s Front, which won five seats, has sent a letter of support to the incoming BJP-led government through its state unit, party secretary general A. Kikon said.