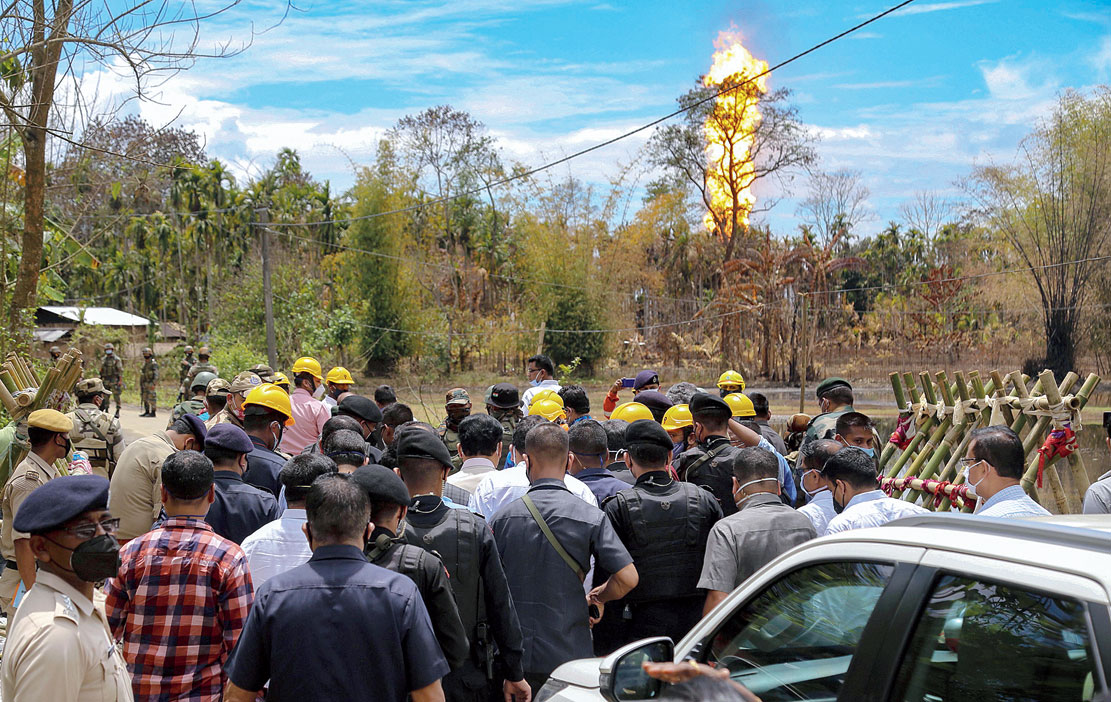 The Assam government on Sunday announced a development package and promised “maximum” compensation for those affected by the gas well blowout and subsequent fire at Baghjan but the reach-out didn’t appear to have satisfied the residents.

The blowout and the subsequent fire have affected around 7,000 people in a radius of 5km. They are now housed at 14 relief camps set up by Oil India Ltd (OIL) which operates the well.

The development package includes a Rs 26-crore outlay to put in place a permanent solution to the problems of floods and erosion in Baghjan, a hospital, a veterinary hospital, a higher secondary school, a skill development centre and a plan to build a 15-km Tinsukia-Baghjan road.

The chief minister said maximum compensation would be given to the affected but did not specify any amount. A damage assessment is going on, and the OIL through the government had given an emergency relief of Rs 30,000 to each affected family.

Sonowal promised to convert the Maguri-Motapung Beel, a bird haven and a biodiversity zone, into an international tourist destination by both OIL and state government, extend financial assistance to women self-help groups of the area and punish those responsible for the blowout.

The announcements were made after Sonowal and Union petroleum minister Pradhan met officials of ONGC and foreign experts and interacted with the affected at three relief camps.

Sonowal appreciated the “resilience” displayed by the people in dealing with such adversity, which he described as “unfortunate and unexpected”. The central and state governments are “standing firmly” with the people of Baghjan and “would do everything” to alleviate their difficulties, he added.

Sangha president Satyajit Moran and adviser Hemanta Moran told The Telegraph that they were not satisfied with the announcements.

“These reachout development measures are welcome but he did not touch upon the specific demands of the locals who have suffered a lot. There was no deadline. Neither he nor the Union minister Pradhan spelled out their stand on the ongoing illegal (oil and gas) exploration and clearance for exploration at seven sites within the Dibru Saikhowa National Park. We will wait till tomorrow for the government to clear its stand. If we are not satisfied, we will announce an agitation programme,” Satyajit Moran said.

The Sangha president said the affected families needed Rs 30,000 every 10 days and Rs 1 lakh every month for 30 years since they would not be able to grow anything in their fields because of the contamination. They have also sought a one-time assistance of Rs 1 crore for each affected family. Satyajit Moran said the new 15km road should be at least one kilometre away from the gas well.

Hemanta Moran said a public meeting on Monday would discuss the announcements and take a decision but made it clear that the affected were against any kind of fresh exploration at the “cost of nature and human lives”. Two OIL India firefighters had died on Tuesday.

The blowout and the fire which entered the sixth day on Sunday have devastated “life and livelihood”. Although the intensity has lessened, tremors and ear-splitting noise because of the fire are keeping the residents on edge.

A preliminary report released recently by the Dehradun-based Wildlife Institute of India on the blowout had said: “Even after a week of the incident, the leakage into the system continues, with no signs of containment.”

The report has made the following observations: