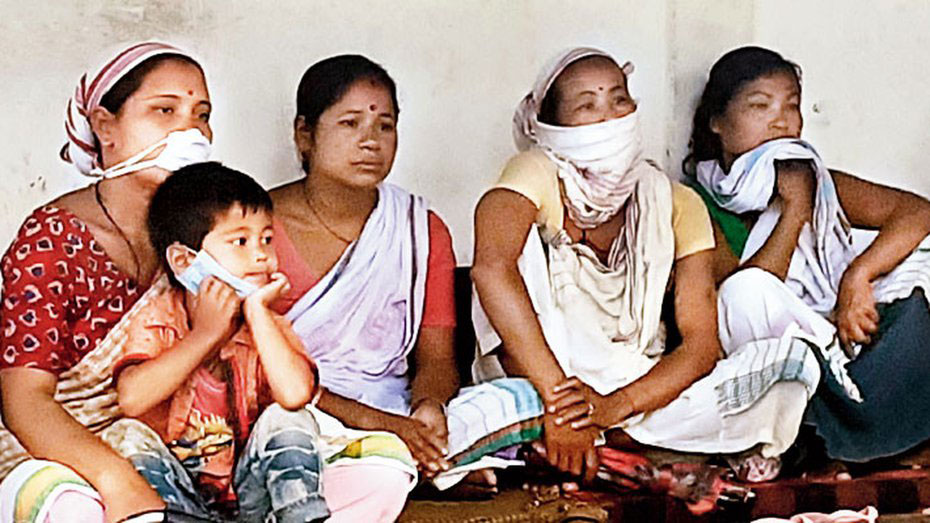 Hundreds affected by an oil well blowout in Assam, which has devastated local tea gardens and water bodies, demonstrated on Thursday afternoon seeking Rs 5,000 a day per family till the problem was fixed.

Natural gas and a form of crude have been leaping 50 metres into the sky — with an ear-splitting noise like an aircraft taking off — since an explosion at 10.30am on May 27 at an Oil India Ltd production well in Baghjan, Tinsukia district, 530km east of Guwahati.

An Oil India statement on Thursday said the gas was blowing out uncontrollably and that water was being pumped into the well through the casing valve to minimise the chances of a fire. The company said experts from a Singapore-based firm, Alert Disaster Control, were expected to reach the site shortly.

The noise and air pollution — which led to breathing difficulties in nearby villages — has led 1,610 families to be evacuated to four relief camps set up by Oil India. The families, who sustain themselves by farming and fishing in water bodies, say their livelihoods are destroyed and lives “turned upside down”.

According to local tea planters, the “condensate” or chemical spray from the blowout has turned the leaves lighter and smelly, causing the industry heavy losses.

The protesters — relief camp inmates — marched near the site on Thursday between 2pm and 3.30pm, demanding compensation and an immediate fixing of the problem.

“Those affected from the Baghjan and Kaliapani villages marched together for about 1km. Hundreds participated because the blowout has turned our lives upside down,” said Hemanta Moran, who runs a school about 1.5km from the disaster site.

A senior Oil India official said a decision on emergency financial relief could be taken by Friday.

Oil India had last faced a blowout in 2005, when an abandoned well became active. It had taken about 45 days to cap, with the help of foreign experts.

The May 27 blowout has affected small tea growers, fish vendors, betel nut sellers and vegetable farmers and ravaged the flora and fauna.

The site is close to the Dibru Saikhowa National Park and is therefore ecologically sensitive. It’s also a popular spot for tourists and bird lovers, said Jiban Dutta, who runs a resort near the disaster site.

“The rivers have thick layers of oil. A dolphin was killed last week. Fishing, in which almost 40 per cent of the local population is involved, is ruined. Our (hospitality) business is devastated,” Dutta said.

“We are having problems breathing and are suffering from the noise pollution.”

Dutta said the local hospitality industry had been gutted by the anti-CAA protests since December. “Just when things were looking up briefly in March, the coronavirus happened. And now this.”

Manoj Hazarika, 44, a small-time tea grower, said a “black day” would be observed on Friday against the “loss of nature”.

An Oil India official said: “We will first try to control or cap the leak. After some time, we’ll revive the well.”

He said the winds can spray the “petrol-like” condensate up to a radius of 2km but it was now falling in the periphery of the well because it was getting mixed with the water being pumped into the well.

It said Oil India had engaged a consultant accredited by the National Accreditation Board for Education and Training to carry out an environment impact assessment. It added that the consultant team had reached the site and begun working.

On Wednesday, Amar Nath, joint secretary in the Union petroleum ministry, had inspected the site and reviewed the situation with state tea tribes welfare minister Sanjay Kishan and officials from Oil India, the state government and the pollution control board.