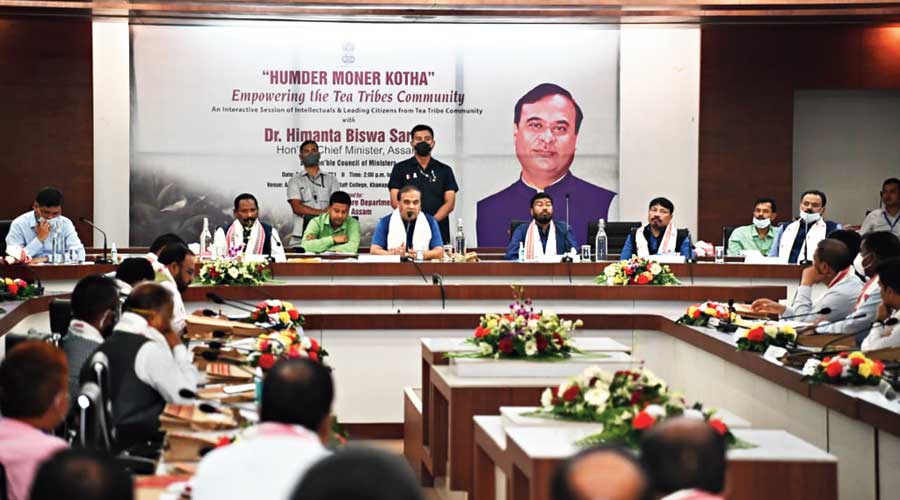 The Assam government on Monday held a first-of-its kind meeting with intellectuals and citizens from the tea tribes to discuss the problems confronting the community and how these can be addressed.

The interactive session organised by the state tea tribes welfare department titled “Humder Moner Kotha (Our Thoughts)”, which continued for nearly five hours, is the second community-oriented interaction after the one held for the Muslim community in July.

Though details of the discussion were not available, former Congress MLA Rupjyoti Kurmi, who recently joined the BJP, thanked chief minister Himanta Biswa Sarma for organising the first-of-its kind interaction to know the problems of the tea tribes.

Kurmi said seven sub-groups will be formed from among community leaders to interact with community members about their problems and submit a report and a road map on how to tackle their problems within six months.

“The government said what they have done in the first 100 days of its second term and what they did in its first term from 2016 for the tea garden people. The government left it to the House to raise the issues confronting the community. The House raised the ST status and the daily wage issue,” Kurmi said after the meeting.

The tea tribes in Assam are Adivasis but not all Adivasi people work in the tea gardens, sources said, adding that more such meetings will be held in the future.

The overall demand of the Adivasi community, which includes the tea tribes, mainly revolves around four long-pending core demands — according Scheduled Tribe status to the community members, hiking the daily wage of garden workers to Rs 351, setting up of an satellite autonomous council and granting land pattas to the landless. Health, education and electricity are other issues which the community members feel will take care of itself if these demands are fulfilled.

A senior Adivasi leader spearheading their cause welcomed the meeting but said nothing concrete will be achieved if the long-pending demands of the community, especially ST status and hike in minimum daily wage of garden workers, were not settled.

“We have heard that the government talked about what it did in its first 100 days and what the government plans to do in the short-term and long-term for the development of our community. But there was nothing on according ST status or hiking the daily wage (of garden workers) which have been our demands, something all the parties know,” he said.

The Adivasi leader added: “The Centre had introduced a bill to this effect in the Rajya Sabha before the 2019 Lok Sabha polls. A report was sought from the state government but there is no headway. Nobody knows our situation better than our chief minister. We are hopeful he will take the right steps to resolve pending core issues instead of giving us sops. They need to hear our moner kotha.”

The population of the tea tribes will be over 75 lakh and they play a decisive role in about 40 of the 126 Assembly constituencies in Assam, a reason why both the ruling BJP and the Opposition assiduously woo the community but they have been voting overwhelmingly for the BJP since 2014.

The meeting also comes in the run-up to the byelections later this year where the community will play a key role in at least two of the five seats that go to the polls. Both the Upper Assam seats were won by the Congress in the last Assembly polls.