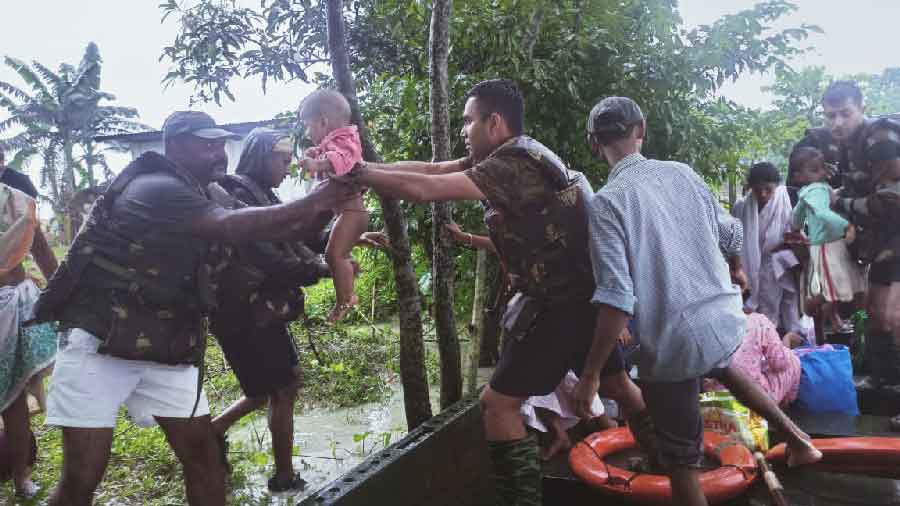 The Indian Institute of Technology, Guwahati will help the Assam government in surveying the flood affected areas by using drones developed by its startup to aide the relief and rescue work.

According to officials, the state government has reached out to the institute to seek its expertise in surveying the flood affected areas using drones to assess the condition in the villages where road connectivity has been disrupted due to heavy flow of water.

The flood situation in Assam remained extremely critical on Sunday with many new localities coming under the impact of the deluge in several districts of the state and overnight incessant rain inundating more areas in Guwahati.

Torential rains for the past week have thrown normal life out of gear in parts of Assam. Landslides have also been reported from another half a dozen places in the city, including Kamakhya, Kharghuli, Hengerabari, Silpukhuri and Chandmari Colony.

Knee-deep water and partially submerged vehicles on submerged roads were seen at many major intersections in the capital city. At some places, water levels even crossed the waist. The approach road of the Guwahati railway station was also inundated.

"The government has approached us and we will be beginning the work as soon as possible. We will be using the drones to survey the affected areas. Also this exercise is important to help the government develop an action plan to prepare better ahead of the monsoon season considering the area is prone to floods and landslides due to its geographic location," Parmeshwar Iyer, Dean, IIT Guwahati told PTI.

"The drones will be used to conduct aerial survey of the areas which have been severely affected and some villages where road connectivity is disrupted due to heavy water flow. The exercise will be helpful in identifying areas where people could be stranded, immediate evacuation is needed and relief material needs to be provided," he added.

"One major challenge in surveying flood affected areas with drones is the wind accompanying rivers during floods, hence the drones which are equipped to withstand the wind speed are needed. These drones have been used in disaster management during incessant flooding in Majuli island of Assam and for dengue prevention in Kolkata," said Debajati Deka, co-founder, Drones Tech Lab.

"Before this, we have catered to different markets encompassing several Indian states which include Karnataka, Jharkhand, West Bengal, Assam and Meghalaya to name a few. The survey and mapping conducted finds applications in various domains which range from mining activities, wherein using drones the exact volume of mine can be assessed with absolute accuracy," he added.

According to the latest updates by the Assam State Disaster Management Authority (ASDMA), the state was witnessing floods and landslides for the last six days, leaving behind a huge trail of destruction everywhere.

In the last 24 hours, 32 districts, comprising 118 revenue circles and 4,291 villages, have reported flooding, it said.

Around 31 lakh people have been impacted, and 1.56 lakh of them have taken shelter in 514 relief camps across the state.