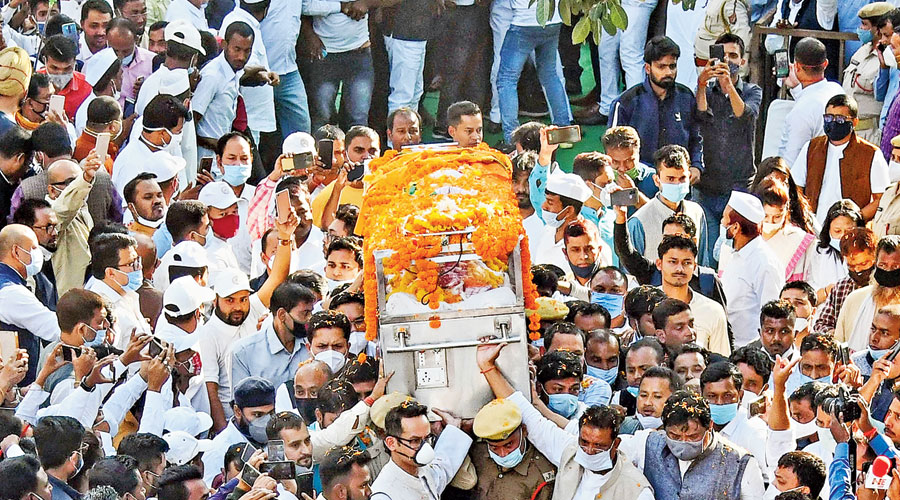 The Opposition Congress will miss a strong and blunt voice in poll-bound Assam with the passing away of former chief minister Tarun Gogoi, someone who could “stand up” to the likes of Prime Minister Narendra Modi.

Gogoi’s death has left a huge void in the Congress just months away from the Assembly elections because he was a man who had the courage to call a spade a spade unmindful of the consequences, party insiders told The Telegraph. They described him as a guardian, mentor, father figure, statesman, stalwart and a fighter till the end.
Gogoi, 86, Assam’s longest-serving chief minister, died of post-Covid complications at the Gauhati Medical College and Hospital here on Monday evening.

There is no leadership vacuum in the state Congress unit — Rajya Sabha MP Ripun Bora is the Assam PCC chief while two-time MLA Debabrata Saikia is the Congress legislature party leader. Still the departure of Gogoi is being felt across the rank and file because apart from his seniority and experience he could stand up to anyone and any challenge.

“We have promising leaders in Bora, Saikia, (Nowgong MP Pradyut) Bordoloi , (AICC secretary Bhupen Kumar) Borah and his son Gaurav Gogoi. All of them have a future. But it was different with Gogoi Sir. Apart from his guidance, we will also miss his strong and blunt opinions, a rarity nowadays,” a PCC office-bearer said.

“He could take on anyone without fear, including Modiji, on any issues and his views got widespread coverage even in the national media. He was so up to date with both state and national issues. This gave us a lot of courage to take on the ruling party. His views invariably helped. We will miss him in the run-up to the Assembly polls next year. He left us at a critical juncture,” he said.

Gogoi till very recently used to take on the central and state governments on the issues of the day like demonetisation, Covid management, withdrawal of special category status, the Citizenship (Amendment) Act and rewriting history, among others.

They cited several examples to prove Gogoi’s strong and blunt views: like criticising the unplanned demonetisation as (Prime Minister Narendra) Modi’s “surgical strike on the common people”. Gogoi also referred to Modi as India’s “Hindu Jinnah” for trying to divide the country on the basis of religion vis-à-vis the Citizenship (Amendment) Act. He had called Modi a liar when the Prime Minister claimed there was no detention camp in the country.

Modi was among the national leaders who paid glowing tributes to Gogoi. “Shri Tarun Gogoi Ji was a popular leader and a veteran administrator, who had years of political experience in Assam as well as the Centre. Anguished by his passing away. My thoughts are with his family and supporters in this hour of sadness. Om Shanti,” the Prime Minister tweeted.

“We will definitely miss him. He (Gogoi) was among the national leaders who had the guts to stand up to the ruling dispensation for its anti-people policies, whether it is the CAA, farm bills, unplanned demonetisation or the Covid lockdown or rising unemployment,” said PCC general secretary Diganta Choudhury.

A reason for Gogoi being so blunt and in the face was he had nothing to hide, according to Satyen Phukan, a former senior additional advocate-general to the Assam government.

“He had nothing to hide, open to any scrutiny and was so connected with the masses. Despite being a three-time chief minister there was no corruption charge against him, a rarity in these days. This gave him the strength to take on anybody. There is a lot to learn a lot from Gogoi’s life and times,” he said.

AICC secretary Bhupen Kumar Borah said the four Congress leaders will reach Guwahati in separate flights and will travel to Srimanta Sankaradeva Kalakshetra, where the mortal remains of Gogoi was shifted on Tuesday evening, and then to his official residence to meet his family members. “Rahulji is expected to reach before 11am. The cremation will take place on Thursday morning with full state honours,” Borah said.

State BJP IT cell in-charge and spokesperson Pabitra Margherita said, “Since Monday our members across rank are paying their respect to Gogoi Sir, a son of the soil. Our national president J.P. Nadda has also cancelled his two-day visit to Guwahati from November 26 as a mark of respect. Our government is also taking all possible steps to give him a fitting farewell by discussing with his family.”

Both the BJP and the Congress have declared three days of mourning along with the state government.

Cabinet minister and government spokesperson Himanta Biswa Sarma said they have not yet found a plot inside the city for a memorial for Gogoi as requested by the Congress.

The PCC chief said the last rites will take place at the Nabagraha cremation ground but they will continue the search for a memorial site in the city.